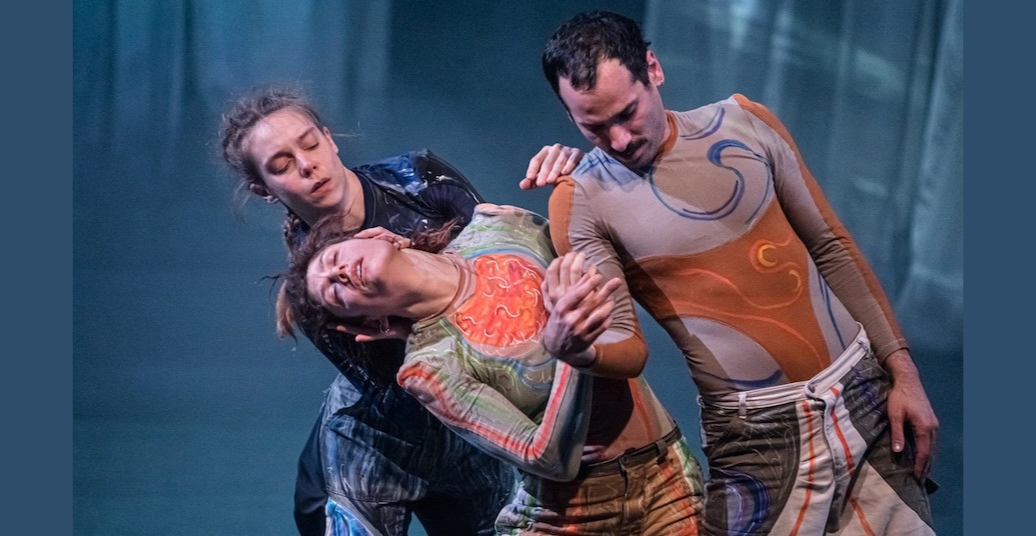 The 7th edition of PURPLE – International Dance Festival for Young Audiences includes the world premiere of “In Future I am a Comet” by Yotam Peled at Theater Strahl for spectators age 13 and older.

01:02:45 — Why is the time glowing up there? asks a girl in one of the front rows before the show starts. I’m wondering the same thing and already have an inkling before the house lights go out, the music starts, and the luminous time-indicator dangling from the ceiling starts to run out. One hour, two minutes, 45 seconds. The countdown begins, time is passing.

01:02:22 — Under strobing lights, the spaceship on the stage spits out three dancers-cum-time travelers (Jana Heilmann, Wibke Storkan, Kaveh Ghaemi). They find themselves in a hilly landscape made up of craggy foam mountains that rise up into the air and are in constant flux thanks to moving video projections (stage design: Camille Lacadee and Alexis Mersmann). There they lie, little creatures in a big world, having unexpectedly arrived in a possible future. Is it the world as we know it or something entirely different? Drowsy, the dancers begin to crawl across the floor, to stagger upright, to take a few steps, to cling to each other, to come to a halt. Where are we?

To choreograph this piece, the Israeli-born choreographer Yotam Peled, who has lived in Berlin since 2015, worked with school-aged youth and researched the future with them. School classes of the Albrecht von Graefe Oberschule and the Robert Koch Gymnasium from Kreuzberg visited rehearsals several times, accompanied the development process, and circled big life questions together: What would it be like to be able to travel into the future? What awaits us? Should I be afraid? And why are we all here?

48.04:27 — The future can be fun, too. Jumping back and forth between pantomimic/gestural and abstract/mysterious movement vocabularies, the three dancers try to communicate with one another and interpret the others’ movements: running across the stage, prancing about, drumming on their chest, distorting their face. Strong? Angry? Rollercoaster? Ah, transformer. Correct.

Just when I’m wondering whether this isn’t merely a simplistic presentation of movement in dance as a clearly decipherable system of signs, the guessing game starts to break down. Wibke Storkan and Jana Heilmann can’t figure out what Kaveh Ghaemi is dancing: Memory, foresight, and so on and so forth. Does everything always have to have a meaning? Can’t everything happen side by side at the same time? Ok.

35:22:03 — The hilly landscape changes steadily; colorful sky-like visuals are replaced by lava-like masses that move sluggishly and menacingly over the black mountains. Twilight approaches and uncertainty spreads. The three time travelers creep across the floor and ask the big questions in subdued voices. Why are we here? What do we do? Where are the others? Where do we come from? WHAT ARE WE DOING HERE?

The sounds of the sea, darkness, lava. The three bodies assemble into a serpentine being that moves in organic, soft wavelike movements—ambling slowly as if in a dream. Time stretches into eternity. Time does not move. Space is not existing. Time is unreal it whispers from inside itself.

14:17:37 — Bodies of water, seagulls screaming, wind, clouds and volcanoes, bright colors. The landscape now flickers between apocalyptic doom and the imposing beauty of the forces of nature. Wibke Storkan stands alone among the hills, moving with exertion, fighting forward as if through a tough mass; and, then, as if controlled by violent internal forces. Explosions of movement erupt from the core of her body and shoot out into her extremities, her face distorts, she chokes, grimaces, stretches her tongue out. Time seems to be flowing doggedly. Until she finally looks up and speaks to us: saying that she wishes she could stop time, that she’s stressed by the feeling of losing time. Is it the same for us?

In the audience are adults as well as young people between 13 and 17 years of age. I am reminded that, at that age, time is full of too-big questions, insecurities, and embarrassments. And that just a few days ago, many young people were hauled off by the police during climate protests in Lützerath, some of them still minors. Likely the future is always a huge question mark, at once exciting and terrifying, for young people; but perhaps this is especially true for the current generation given climate change, wars and crises, and a society in a seemingly constant state of stress. And the question which silently thrusts itself on them (and us), and which we all can no longer ignore, burns in the space: What about our future?

00:00:00 — Everyone stares at the time display and briefly holds their breath. Time stands still.

Eventually, Jana Heilmann reaches for a remote control, shrugs her shoulders, and presses the ON button; the seconds start to run again unperturbed, as if nothing had happened. Time goes on.

“In the Future I’m a Comet” by Yotam Peled (aged 13+) premiered on 18 January 2023 as part of PURPLE – 7th International Dance Festival for Young Audiences and can still be seen at Theater Strahl on 20 January at 11 am and 21 January at 7 pm. Tickets are available at purple-tanzfestival.de and at the box office. Next performance dates at Theater Strahl from February 2023, tickets at theater-strahl.de.

Rearranging Time, 8 October 2022 by Maria Ladoupolos on “About the day after tomorrow – a science fiction time journey” by Cécile Bally & Cathy Walsh