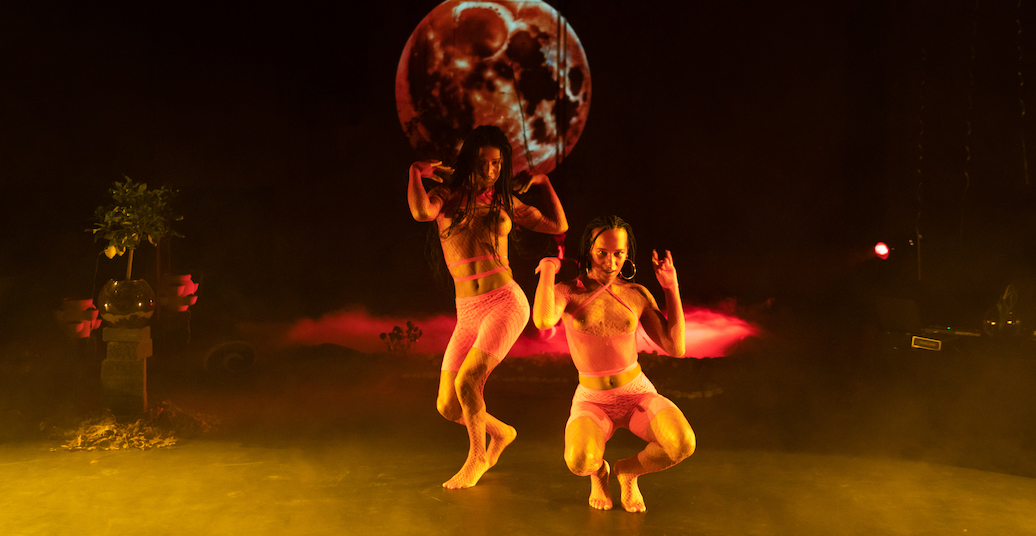 TANZTAGE BERLIN 2023 >>> Artist Slina da Soledade aka Slim Soledad and her guests premiered their new work on 14 January 2023 at the Sophiensæle.

Associations on the sensory level.

The festival for emerging choreographers Tanztage Berlin 2023 presented Slim Soledad’s “VIBRATIONS, TRANSLATIONS” at the Sophiensæle: an encounter between music, performance, and dance that explores the ritual process of translation between sound vibrations and physical movement. The performance researches music’s potential to resolve the conflict between the “human” and the “spiritual,” intertwining material and immaterial experiences of the world.

The piece has not yet begun. As we enter, we are greeted by electronic sounds. Fog swirls around me, as do other people passing by in search of a seat. The red moon already has me under its spell.

Why is it that this red—this lush, warm, comforting red—seems so familiar to me? It’s as if we already know one another—but from where?

Though I can hardly escape its gaze and am drawn to it more and more deeply, I also perceive outlines in front of it.

I see piles of earth in the shape of a circle, stones stacked atop one another, and the contours of four people sitting in different areas of the stage. Is that water shimmering in the circle of earth?

And, again, this rich red—I dive into it, I sink in it. Where, where do I know it from? Did one of the outlines just move?

The light goes out; together with the performers, the audience is plunged into sounds, thickening fog that somehow never quite approaches, in a warm red sea that seems to have no end.

I breathe in the sounds. Breathe through them, breathe with them. Endless red. A tree bearing lemons. Fog moves over the mounds of earth with plants in them but does not reach us in the audience. The performers stretch out their hands to one another but, like the fog, softly recede each time.

Being. In the way the performers move and articulate their bodies, it reminds me of a site of being which contains the past without judging it and (in spite of it) strives to create, to mold, something new out of that existing being. The performer by the water moves backwards, but the others turn themselves forwards in their movements, like elements—if there is such a thing as forwards; here, the here and now seem to be associated with a place that connects matter, gives it movement and form, and manifests like fog that moves in dense swaths across the surface and yet clings.

The moon. The beautiful red moon whose spell I am unable to escape. This red that I want to suck up, taste, and feel, like the music that penetrates my body and fuses me with the dance movements whose outlines melt, merge, form themselves anew, and manifest in elements that are in part familiar to me.

Between the sounds I hear spoken words. Though it’s English, it’s difficult to follow, to understand. This could have something to do with the earplugs that I picked up at the entrance and am still wearing. Later, I recognize Portuguese. Though I don’t speak or understand Portuguese, the speech manifests in movement in front of my eyes and it is as if I could follow the words in the movement: the performers, as elements, should unite (?)

A reoccurring language that is (physically) familiar to me repeats several times: voguing.

A communal existence that continues to manifest play and matter until the sound changes and an orange approaches. The stage is immersed in orange light that now seems to dictate the performers’ movements. An orange that draws out a staccato sort of movement, increasingly urgent, and tells of this urgency in a way that now seems like distress. This is a crucial nuance, because there cannot be only red which manifests in warm movements and disengages from the reflection of the other. When the orange fades but does not yield, then the association of green and water appears. This becomes liquid between the performer’s hands.

And although they need one another to water the tree—a tree needs water (?)—they do not approach one another, the performer near the water and the performer sitting by the lemon tree, they are fixated, they do not leave their places. As if there were an unspoken rule against eating from the lemon tree; and yet the texture of the bass keeps it alive, nourishes it—or is it the other way around? Because the bass sounds as soon as the performer comes closer to it with their face, their hands, and their feet? Would its luscious green leaves burn you if you touched them?

Slim Soledad, Alada, Black Pearl de Almeida Lima, and a fourth performer who is not named in the program create a universe of sound, texture, and color that is physically tangible. They create an atmosphere with and through voice and sound, contemporary dance, and voguing that I don’t want to leave. Since immersing in it I want to swim in this universe, linger, wishing it would never end.

And when it does end, I am left with the question: “Was it all just a dream?”

“The same way I miss nothing I miss everything.”

Artist Slina da Soledade aka Slim Soledad and her guests presented their multidisciplinary work “VIBRATIONS, TRANSLATIONS,” about ritual practices in a dialogue between dance and music, as part of TANZTAGE BERLIN 2023 in Sophiensæle.

Red moon looks at me mysteriously.

Its light cuts four silhouettes out of the black space.

A shrine of red columns of light hit the ground.

Damp running water steams up between me.

In front of me. In me. Around my body.

Three worlds that intersect one another.

In a triangular circle.

The movements that coincide and oppose one another.

Lines. Lines. Lines. Lines. Hips. Imaginary claws. Lines flow like water that floats in the form of humidity through the space. Red smoke that creeps out of the moon slinks all around it. The movements pull my eyes out of their sockets and towards the stage. They do not return. They bathe in RED as if tucked under a comforter. In a RED that, here, does not seem at all frightening. Or does it?

In “Vibrations, Translations,” the Brazil-born artist Slim Soledad works with three other performers, with bright red colors, a DJ booth on the stage, experimental electronic music, dance, speech, and a massive orange-red projection of the moon.

At first the audience is given time to immerse in the sound. It is reminiscent of a vibration that at times screams obtrusively, at times caresses the ears in a crisp electric wave. And as the dancers begin to move, it becomes an embodiment of stories that we can only feel rather than understand. It is at once dramatic and subtle. The repetitive, mirrored movements of a being that is composed of two bodies (Slim Soledad and Black Pearl de Almeida Lima) reminds me of ritualistic acts. Later, the entire thing becomes almost a ballroom performance: the sound of the music takes on an insistent beat, the dancers smile at one another and the audience, they play, enjoy themselves. The magic that has been built up shifts to the mundane, speaking to us and inviting us to dive deeper into the world onstage.

The movements of Slim Soledad and the performer Black Pearl de Almeida Lima (who is part of the ballroom scene and the iconic House of Saint Laurent) reflect a skillful dance mix of, among other things, voguing, twerking, and contemporary and modern dance. There is speaking throughout in Portuguese. When there is English, it blares over loudspeakers in the form of a recorded masculine moderator’s voice.

Slim Soledad’s final words, spoken to the audience through a microphone, are the only ones she wanted us all to understand: “This is a dream come true… The same way I miss nothing I miss everything.” It is a sentence that feels at once like an ordinary message and a poem.

It was too short.

I don’t want to leave the magic behind.

Some things were left unfinished.

It could have been more intense.

And yet the red thread through the red world was perfect.

I miss it too, Slim Soledad.

English translation of the two texts by Cory Tamler

These two texts by Diana Schümann and Elina Pantsyr were written as part of the two-day tanzschreiber writing workshop for Tanztage Berlin 2023 under the direction of Agnes Kern and Johanna Withelm, in collaboration with dramaturge Mareike Theile.