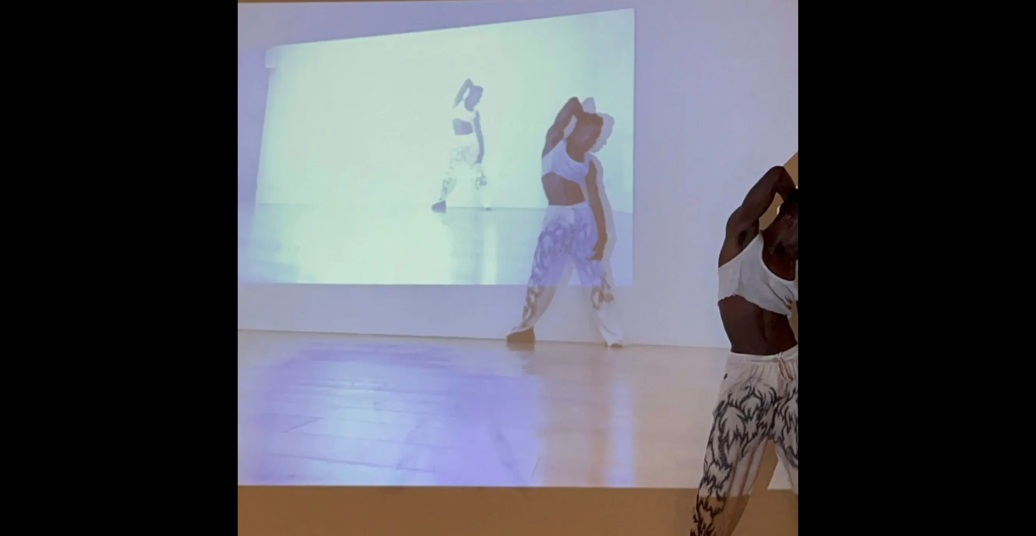 TANZTAGE BERLIN 2023 >>> Is there no way out in choreographer/performer Kévin Bonono’s “A Sensation of a Truth”, played over 13 and 14 January 2023 at Sophiensæle?

A sense of light threat hangs in the air as the audience enters Sophiensæle’s white-walled Hochzeitssaal. A masked figure floats around the traverse auditorium menacingly, yet softly, never addressing us directly, and nevertheless omnipresent. The white curtains draped in the centre of the room dangle in a square, full of potency. The soundtrack (live sound by Rey KM Domurat) blows an irritating, disturbing gale, punctuated by occasional rumbles resembling thunder, with seagull-like pulses the only life in the purgatory.

“A Sensation of a Truth” is one of those experiments designed to make an audience feel discomfort, breaking conventions that are there to make the stage a place of sanctuary (for some). Reading about performer/choreographer Kévin Bonono’s background, which concerns the different violences placed on Black and queer bodies based on how they are read, it is not difficult to deduce why this approach is taken. This is a performance about survival: “It decodes hatred and turns the necessity to identify racism and homophobia into a survival strategy”. Over the next 90 minutes, the show effectively does what it says on the label, offering a space that deliberately interferes with, threatens, and deconstructs dominant modes of viewing, as the body repeats back and toys with suffering imposed onto it by the socially-constructed collective gaze.

This makes for a lot of stillness, but also a kind of ‘explosive burst’ – a continually-recurring movement that somewhat defines “A Sensation of a Truth”. As Bonono drifts around the stage together with collaborator Nikita A. Zhukovskiy Trachtenberg, shifting around cameras and lights into different formations, an occasional spasmodic contortion intervenes, only to develop into a tense slow-burn elaboration.  It’s a movement that repeats in different ways, and contributes – together with the soundtrack – to a ‘charged’ feeling that pervades the piece.

This sometimes breaks out into something resembling an attack, as the artist’s conviction of re-appropriating the tools of production (4 moving screens, 2 cameras and sets of lights on rolling stands) also involve turning them against the audience. As the body is relentlessly dissected and fragmented into an abject interruption, so the tools, that capture and frame them are deployed against the audience, forced to watch itself in the reflection of the four movable screens.

The performance stays mostly inside this single plane of anguish, sometimes digressing into shoulder-heavy sways and squats, sometimes with tongue poking out and heavy panting. Towards the end of the piece, however, the constellation of lights, screens and cameras are arranged into a type of open coffin. Surrounded by cameras on slight delay, the artist plays with facial manipulation as though controlled by an invisible hand, creating a kaleidoscopic tableau. This scene anticipates the final image, where Bonono plays against the side wall with a multitude of silhouettes chasing after him, eventually turning to a stark red wash and a sudden smooth, lounge feel to end.

“A Sensation of a Truth” is a bold, practical intersection into viewing experience of the body, marked by its use of technology and fragmentation to challenge and destabilise normative modes of viewing that define etiquette – pointing the finger at the trap, while largely sidestepping the relief of a way out.

Tanztage Berlin 2023 is running until 21 January, you find the festival program and ticket info at tanztage-berlin.sophiensaele.com.