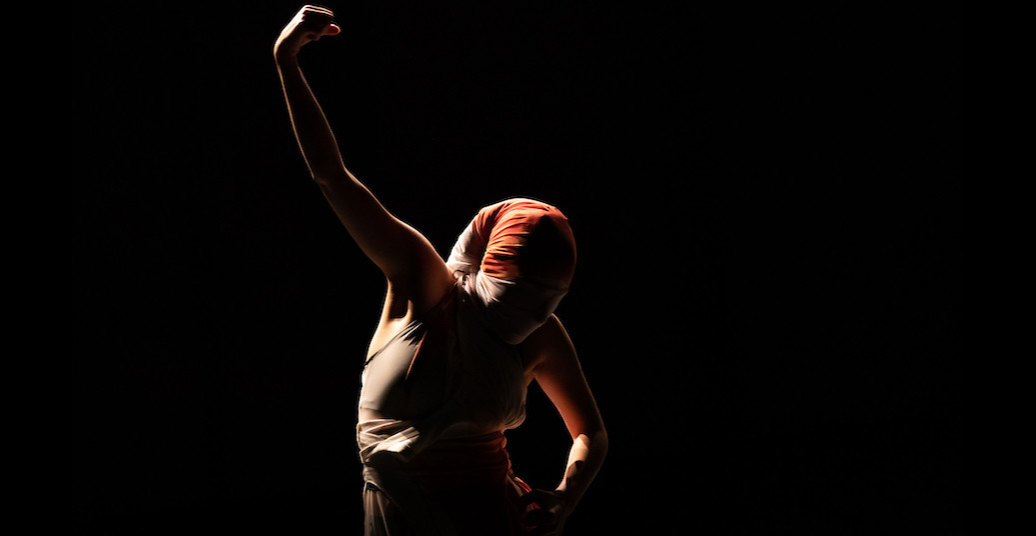 „To be a fish in a Raki bottle“, Elvan Tekin ©Mayra Wallraff
14. January 2023, tanzschreiber-Werkstatt Texte in Bewegung

TANZTAGE BERLIN 2023 >>> In “Matria – Motherland” by Rocío Marano and “To be a fish in a Raki bottle” by Elvan Tekin, two choreographers rotate staunchly around concepts of masculinity, identity, and political engagement.

Matching one another’s pace, Rocío Marano and Ángela Muñoz circle the mysterious set of “Matria – Motherland,” which consists of two platforms, a drum, and a snare. They wear eye-catching soccer shoes and their gaze is at first directed at one another, then at the audience. The beginning drags on, slowly but surely the two performers become horses in a circus ring.

We wait for the thundering of hooves. I ask myself whether, in this contemporary interpretation of the traditional Argentine Malambo, the drum will even be touched, let alone played—and it pays off. Suddenly they dash across the stage, naked from the waist up, Ángela Muñoz with the drum, Rocío Marano with her top now slung around her neck like a soccer scarf. Rocío Marano roars at the audience, striking a triumphant pose as if she’s just scored a goal.

Something about women with percussion instruments never leaves me cold. The same goes for the short, perfectly regal sequences of steps that Rocío Marano performs on the plateau. The audience cheers after each of these sections of the show. And yet there’s something oddly grotesque about these clearly masculine-connoted movements and the showiness of it all. The piece maintains an ingenious ambiguity: to what extent is Rocío praising the tradition of Malambo, to what extent is she making fun of it? How should I interpret the accusatory text excerpts? Are they intended seriously? “Miramé bien a mi vulva y escucha mi lamento!” (Behold my vulva and heed my lamentations!).

I enjoy the demystification and the satisfying images with which we’re rewarded. A helmet studded with the two horns of a steer is slowly illuminated, coming across at first as a relic; once set on Ángela Muñoz’s head, it’s just an ordinary bike helmet. The performers lead us to thoughts of the Malambo’s mundanity.

After a few fake endings, the piece breaks open: the performers, now dressed in gaudy furs, rap the very texts that previously showed up as poetic laments. Feeling the power that bursts out of every pore of this performance and these female bodies, I make my peace with the somewhat tedious beginning and the at times faltering dramaturgy. The sincerity of the performance is such that it has me beaming for days after.

Following “Matria,” Elvan Tekin’s “To be a fish in a Raki bottle” offers another appropriation of a male-coded (dance) practice.

Elvan Tekin lies on the ground like a landed siren. Her face is wrapped in a red-and-white-flecked strip of cloth.  A cracking noise starts. Like a puppet, she moves her limbs in isolation as if it is her bones that are producing the cracking, and they wriggle steadily until her body stands motionless in front of us. The quality of the movement is so precise and spooky that, as far as I am concerned, there is no need for her ever to stand up at all. But stand she does, because she has something to say.

The performer circles the stage with the focused intention of her hands until she arrives at her final gesture: she begins to spin on her own axis. The association with a dervish is unavoidable. Her unbroken movement produces change through its very consistency and uniformity. Like the Kurdish women’s movement to which Elvan refers in the piece. I start to meditate, thinking about this text, among other things.

Both the Malambo and the whirling dance of the dervishes evolved from very local, in part religious practices far from the Western eye into national tourist attractions. Both performances circle different cultural reference systems that they celebrate, criticize, and redefine—that is, to which they apply feminist methods. With the fifth performance made by non-male performers in a row, the Tanztage Berlin seems to have declared a matriarchy.

The performances „Matria – Motherland“ by Rocío Marano and „To be a fish in a Raki bottle“ by Elvan Tekin took place on 10 & 11 January 2023 as a double-bill at the Sophiensæle. Tanztage Berlin 2023 runs until 21 January, the festival programme and ticket information can be found at tanztage-berlin.sophiensaele.com.

This text by Anna Chwialkowska was written as part of the two-day tanzschreiber writing workshop for Tanztage Berlin 2023 under the direction of Agnes Kern and Johanna Withelm, in collaboration with dramaturge Mareike Theile. Click here for the tanzschreiber article by Vera Knolle, who also saw the double-bill “Matria – Motherland” by Rocío Marano and “To be a fish in a Raki bottle” by Elvan Tekin >>> “Two Positionings”, 14.01.2023, tanzschreiber-workshop ‘Texts in motion’.