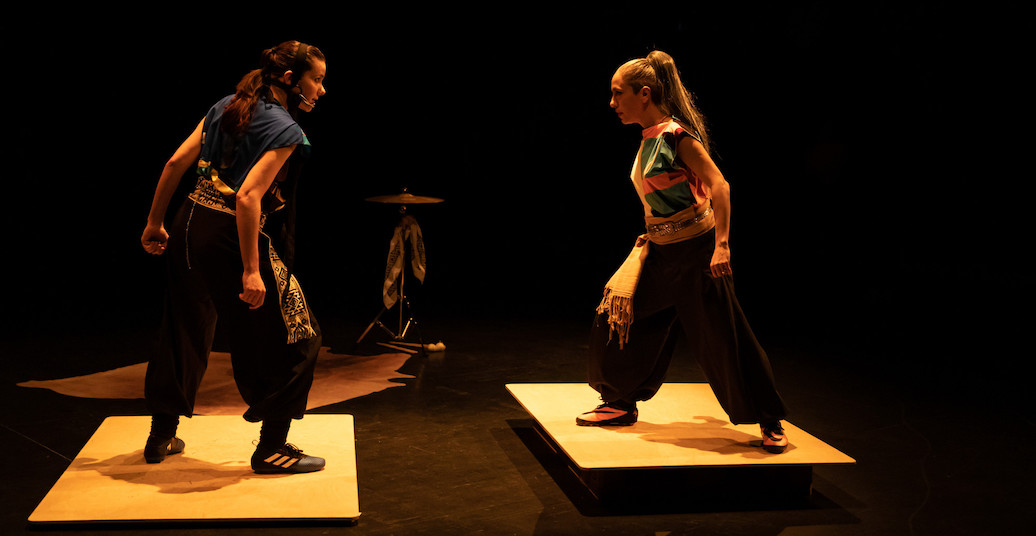 TANZTAGE BERLIN 2023 >>> In “Matria – Motherland” by Rocío Marano and “To be a fish in a Raki bottle” by Elvan Tekin at Sophiensæle, two choreographers negotiated geopolitical references in different ways.

This evening at the Sophiensæle was a chance to observe, in two performances from Rocío Marano and Elvan Tekin, two different strategies in dealing with meaning. Each piece referred to the specific historic and geopolitical frameworks of a particular region (Patagonia/Wallmapu and Turkey/Kurdistan, respectively), and yet displayed two very different ways of working with these references. While Marano worked with interweaving elements of meaning in movement and costume, Tekin contrasted gesture with a nearly abstract (costume) material.

In “Matria – Motherland” Morano works with the dance of the Argentine gaucho, the Malambo. The piece begins very simply, concentrated on powerful footsteps that strike the ground in the dark. Then it develops into increasing complexity of the patterns of steps and the percussion the shoes create. In an explicit reference to Anne Teresa De Keersmaeker’s “Fase,” the rhythms shift in relation to one another until they break down and de-synchronize. Wearing the pants of the gauchos but beneath them soccer cleats, the dancers circle one another next with wary mimicry and face off as rivals. The piece is working here not only with the cliché of “the Argentinian” and the practice of the Malambo as contest, but also takes up the hybridizations in the culture of the gauchos with a subtle connection of elements of meaning, particularly the exchange between horses and humans: one of the dancers wears a kind of halter around her head, the other sports a ponytail; the circle they both describe with their movements is traced on the floor with something like earth, reminiscent of a race track. Just as Malambo, as a percussive dance, can stand for a game with the sound of hooves and thereby for the transformation of gaucho into horse, in the piece this hybridization is developed further, for example when the dancers in an act of feminine appropriation dance and drum with naked torsos or defamiliarize the steps of the Malambo. The acoustically space-filling, energetic performance moves the audience to applause several times between scenes. It has a festival atmosphere long before the final trap number.

But it begs the questions whether the virtuosity of the material doesn’t at times take up too much space in the foreground; the individual sections stand, then, somewhat unconnected next to one another. A tighter control of content and dramaturgy could have lent the piece greater consistency and sharpness.

Elvan Tekin’s “To be a fish in a Raki bottle” begins with a sequence of movements that in part flow like waves, in part fragment her body, that initially remain open in meaning. As this sequence ends she comes to a standing position and removes the scarf that until now has been wrapped around her face and head. She holds it with both hands, which form into fists, and seems to want to stretch it in that she extends one arm away from herself and holds it there. With an abrupt movement she changes her orientation in the space, nothing more, but suddenly the scarf can be seen as a weapon. Here, Tekin is able to take a meaning that has been kept vague and, in the next instant, turn it into something very concrete, subsequently sketching a situation of threat. The scarf also becomes, over the course of the piece, handcuffs, a whip, a flag. Tekin’s hands alternate between fists as gestures of defense and struggle and hands slapped in front of the face as a gesture of despair and mourning. Gradually, Tekin begins a spinning dance, which makes one think of dizziness and the feeling of “riding a carousel” after too much alcohol—or raki; but also of joy and exuberance. Using simple means, the choreography oscillates between self-loss and self-enjoyment, before the dancer, at the end, looks back at the outline of the shadow cast by her body. Tekin focuses here, as in the piece as a whole, on giving form to an experience. The distance between the body and its shadow with porous borders points to the inner complexity of a self that remains open to acts of recovery and self-empowerment.

Photo: „To be a fish in a Raki bottle“, Elvan Tekin ©Mayra Wallraff

The performances „Matria – Motherland“ by Rocío Marano and „To be a fish in a Raki bottle“ by Elvan Tekin took place on 10 & 11 January 2023 as a double-bill at the Sophiensæle. Tanztage Berlin 2023 runs until 21 January, the festival programme and ticket information can be found at tanztage-berlin.sophiensaele.com.

This text by Vera Knolle was written during the two-day tanzschreiber writing workshop for Tanztage Berlin 2023 under the direction of Agnes Kern and Johanna Withelm, in collaboration with the dramaturge Mareike Theile. Click here for the tanzschreiber article by Anna Chwialkowska, who also saw the double bill comprising “Matria – Motherland” by Rocío Marano and “To be a fish in a Raki bottle” by Elvan Tekin >>> “The Matriarchy Has Arrived”, 14.01.2023, tanzschreiber workshop ‘Texts in motion’.