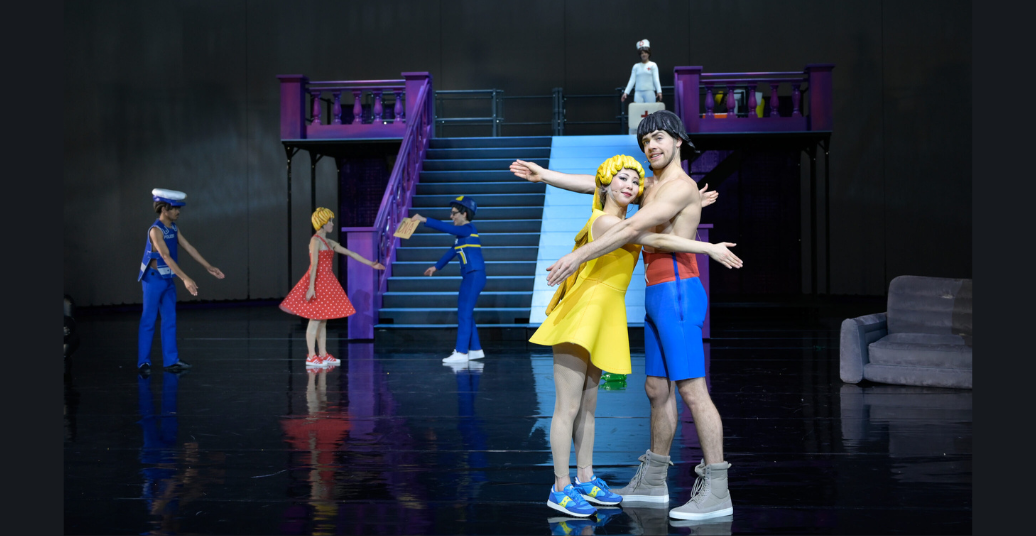 Constanza Macras and the team of DorkyPark have created a funny beast in “DRAMA” – a smorgasbord of performance styles within an absurd satire, premiering at Volksbühne am Rosa-Luxemburg-Platz on 19 January 2023.

Most of the time spent watching “DRAMA” is spent either relentlessly entertained, or trying to decode the stream of forms, testimonials, and cultural references jammed into some 2.5 hours of stage time, danced, sung, and drama’d from a seemingly unexhaustable ensemble.

The opening frame, in which 10 dancers perform clichés from Shakespeare among a fairy-tale forest backdrop, is quickly dropped for a specific movement device: a puppet-like, staggered technique that plays out doll-like scenarios of superficial domesticity, father-and-son mythology (à la Joseph Campbell) via badminton, and dramatic double standards. It’s sort of like watching the TV-series Thunderbirds as a trashy soap opera, as the performers navigate a Barbie-doll/Playmobil world of absurdly stiff limbs and overly-proclamatory voices, whilst offering the audience a deadpan, nod-and-wink stare as they go about constructing and deconstructing various façades.

A show-stealing rendition of the US folk tune “The Boy Who Wouldn’t Hoe Corn” begins a pastiche-laden second act of sorts, where the performer Campbell Caspary dons a cowboy hat and stirrups, drawling through a hyper masculine southern-style number complete with ‘dancing girl’ ensemble and a bright-pink staircase. This begins a transition into ‘Al Revista Argentina’, apparently a Weimar-era Argentinian-French cabaret-revue format, in which the performers don feather boas and rainbow swim costumes, occasionally dress as mermaids, perform Faust or sing Wicked’s “Defying Gravity”. “DRAMA” posits here a system of control of a different type – freed from invisible puppet strings, the performers are instead forced into a desperate, grinning, Friedrichstadt-Palast style extravaganza, broken only by their desperate 1st person testimonials about exploitation and abuse, which is continually re-connected with the politics of spectacle that such shows create.

What to make of the critique running through “DRAMA”?  Stories from Candaş Bas of being shamed for getting a first period on stage in Turkey, and a Cuban dancer demanding their passport back from a German touring company after being paid only 60 Euros per performance seem to point to discourses about exploitation and accusations of performative solidarity. Yet any poignancy seems to drown in some impossible contradictions: complaints that “Dance is like a land of emerging economy – full of natural resources, but victim of unstable politics and appropriation” are a little hard to take seriously in a context where such conditions flooded in during a short but transformative artistic directorship 5 years ago, in which many artistic and labour traditions of the Volksbühne vanished (not to mention a flimsy analogy between artistic labour and resource extraction in the Global South). To what extent is “DRAMA” able to implicate itself in the creation of corrupt conditions of art production?

Macras and dramaturg Carmen Mehnert lay out these contradictions to a degree, including in a constant movement between high and low culture, and its sudden shifts between dancers magnified through first-person testimony, only to be lost in mass spectacle. Yet, “DRAMA” seems to repeat the shallowness of its target: the attack on superficiality is replaced only with a – in the end equally shallow – tapestry that attacks structures while simultaneously celebrating its incorporation within them. The result is easy to enjoy on the surface level, but dig a little deeper, and – as with natural resource extraction – it can be that only short-term solutions to broad systemic crises are to be found.

“DRAMA” by Constanza Macras | DorkyPark had its premiere on 19 January 2023, and is now playing in the repertoire of Volksbühne am Rosa-Luxemburg-Platz. Next shows on 21 and 29 January, 3 and 27 Februar 2023, more dates and ticket info at volksbuehne.berlin.