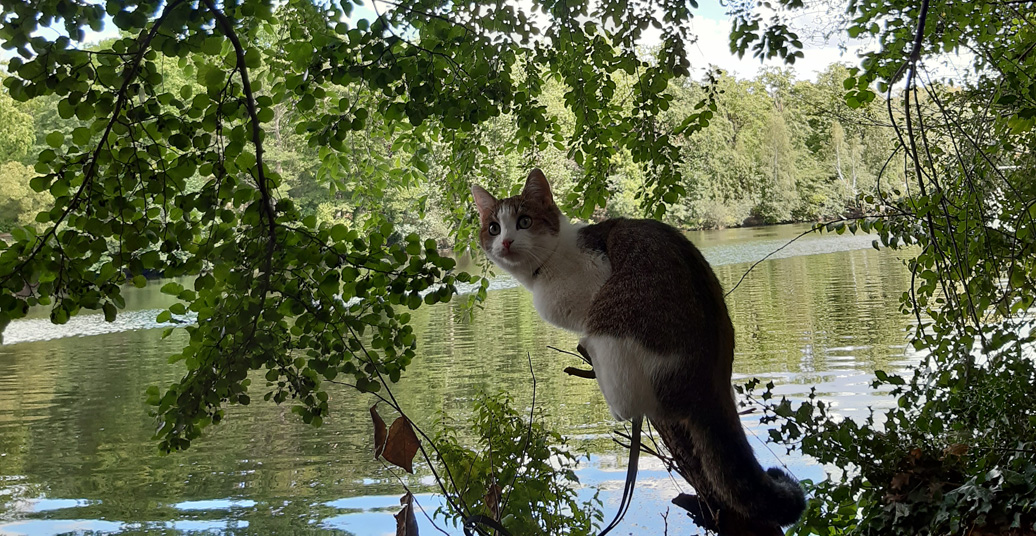 Inky Lee contemplates hormones, desire, and love in the context of attending Twinkle, a sound and movement gathering, and observing her cat’s hormonal explosion.

The only lights in the sky were the stars, innumerable. The sheer number of them made the sky look freaky and I became one with the wooden floor of the balcony as I lay flat upon it for hours and gazed up. The longer I lay there, the more the sky seemed to undulate, like water. Once, on a wild island, I saw the night sea covered with glowing plankton. The sky above me became that night-ocean. I could hear the steady waves of the crickets, and the periodically rushing waves of neighing horses and howling wolves. I felt alive. I masturbated to the blissful tranquillity of aliveness. As I came, exactly at that moment, a shooting star flared across the ocean of the sky. A little fish jumping out of the water. I wished for love. And then, I thought to myself, I do not know what love is (although I had just read two books of love poems). But I wished for it anyway. It turns out that the little love-fish shot itself right into my cat’s pussy. That was a Tuesday night.

On the Saturday night, I sat at Twinkle, a sound and movement gathering in a friend’s studio.
I was swamped in a hormonal soup of PMS. The friend who organised the evening (who I’ll call ‘B’) has been going through various hormonal changes in the last several months, as they started to take Testosterone (or ‘T’) for the first time. They told me that their voice has been deepening and that they were not sure what to think of these physical changes. As a response, I recited a line from a poem by Frank O’Hara:  you don’t have to fight off getting in too deep / you can always get out if you’re not too scared

For the first time since last December, I left Berlin to spend some time in the German countryside. It was also the first time that me and my cat Tuna were separated. I delivered her to my neighbour’s home where she would be staying for the three nights I was going to be away. What happened was that my cute kitten turned into a horny grumpy monster almost from the moment I left. My neighbour reported that Tuna went into heat from the Tuesday night. Hormones engulfed her and transformed her into a restless, tortured pussy crying out for the fulfilment of her natural desires. The neighbour sent me videos of Tuna dragging her butt along the floor and squealing like an otter, and asked: “IS THERE ANYTHING I CAN DO?”

There I was, in my worst state of hormonal mess, sitting at Twinkle, alone in the corner of the studio. In this state, I usually have to crawl into my bed even if it’s broad daylight, pull a blanket over my head, and hide in darkness for an hour before I’m capable of even meeting a friend for a cup of tea. Even something this simple would throw my nerves into a state of angst. Despite my heightened anxiety and irritability, I brought my body to Twinkle, because I trusted there would be a safe space to exist and softly coexist with others in whatever way I needed to. We were sipping hot tea with splashes of whisky in it, as we sang, banged on instruments, and swayed our bodies. At one point, B said that they couldn’t hit the high notes they used to be able to hit, but that they were accepting it. I remembered back when I met B in their initial stages of taking T. I had never seen them so confident and grounded in their own body. They described the feeling of their skin literally thickening, allowing them to move through the world with so much more ease. They added that since they don’t menstruate as frequently anymore, they have much more energy to actually do things. They wanted to invest this energy in creating safe spaces for the LGBTQIA+ community.

Watching Tuna go crazy was proof that hormones are real. I held a growling Tuna in my arms and told her that I loved her just as she was. I could see, however, that she was suffering. I thought about having her spayed but then imagined the scene: Tuna lying unconsciously on a cold table. Tuna under the knife. Tuna being cut open. Tuna bleeding. Oh No. Feeling torn, I wrote to a friend who has been working on his PhD dissertation in philosophy on the difference between man and animal. I asked: “When cats mate, is it just for reproduction or do they also do it for love? Should I have Tuna spayed? Am I taking love away from her if I do?” Thankfully, he wrote back quickly and with a thoughtful reply: “I don’t think it’s ‘love’ that you would be taking away, though I do think that you would be blunting a kind of ‘desire’. This seems kind of unfortunate. However, something else that you might keep in mind is that cat sex is actually painful for the female. This is kind of gruesome, but the penis of the male cat has very small barbs on it — like thorns on the stem of a rose — that work to (1) stimulate ovulation in the female, and (2) scrape out any semen left by other male cats to ensure that the current mater will be the father of any kittens. So, poor Tuna is being driven by her biology to want something that will actually be very unpleasant for her, and could leave you with unwanted kittens. That’s why I think it’s fine to have cats spayed.”

At Twinkle, there was a friend of mine who was suffering from her desire. She once told me that she is afraid of her desire. As we were both putting our jackets on to head home, she began singing “I want to be OK” in a slow repetition. I echoed her words in harmony. B joined in on the drums and another person slid in on the electronics. We listened to each other attentively as we gently tuned into this nonverbal embrace of our collective sensitivity. As we walked together to the bus stop, my friend told me that she is ashamed of her desire and she added that she sometimes feels so painfully lonely. Twinkle, however, had made her feel much better. “Just singing the feelings out into the room with the others really helped,” she said.

At this point, I should say that I am rather confused. What am I trying to communicate with this text? Even after reading it through many times, I’m still not sure. I can say that it took me a long time to get home from Twinkle, since all the trains I needed to take decided to present me with problems and delays. But I didn’t mind. I can also say that by the night of Twinkle, Tuna was back to ‘normal’. The life, awe, overwhelm, serenity, desire, and love that I had felt gazing up at the night sky in the countryside are somehow sprinkled throughout this text, but in a messy and human way that can often just seem mostly confusing. I can’t put my finger on it. B wrote to me the day after Twinkle telling me that they understood how difficult PMS could be, and that I was glowing nevertheless. I remember B shouting angrily into the microphone at one point during Twinkle. They were shining with their own sparkling light. My friend’s shame and pain, meanwhile, were a different kind of a beautiful radiance. Hormonal Tuna was also a powerful blaze. This mysterious jumble of glowing lights embroiders my night sky like a chaos of stars, and it makes me feel alive.