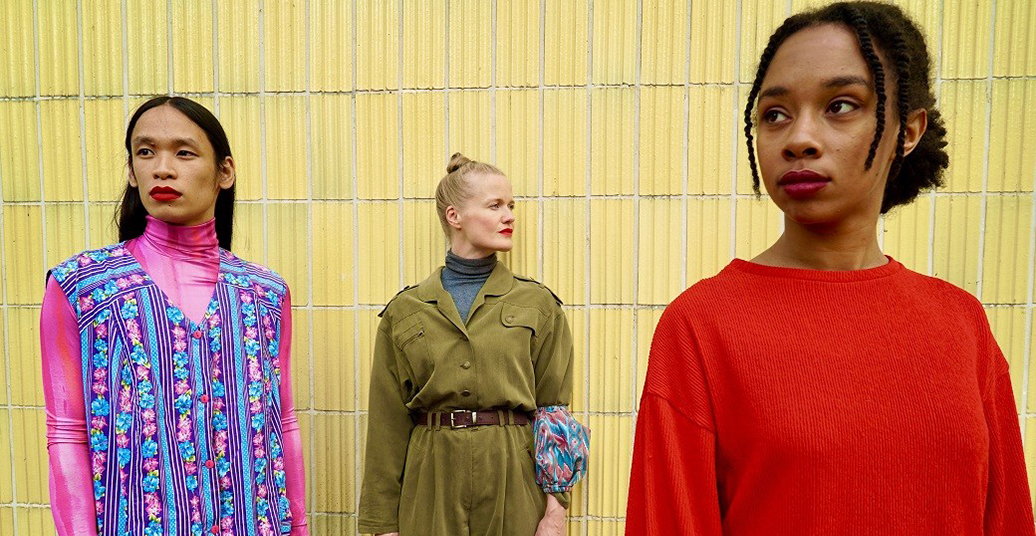 Between December 1989 and March 1990, the Central Round Table met in East Berlin to discuss making reforms to the GDR, and to draft a new constitution. As I enter Sophiensæle, I am informed that the year is now 2090 and those visions have been implemented. “POSTOST 2090”, by Rike Flämig, Anna Hentschel and Zwoisy Mears-Clarke, is a celebration of 100 years of the draft constitution, of feminist utopias, and of ‘Ossifuturism’.

I choose one of the swivel stools dotted throughout the space, as the five performers walk slowly between us, speaking softly, moving gently, a very subdued beginning to a celebration. Pham Minh Duc, Rike Flämig, Claudia Graue, Zwoisy Mears-Clarke and Yvonne Sembene then begin speaking to us loudly at the same time, and I can only catch fragments – an ecological manifesto, a description of the new holographic fountain in Treptower Park. The overlapping monologues are delivered from atop installations made from a range of materials: straggled grass, squeaky polystyrene, taut plastic. It is a textural variety which I also see among the performers, in their movements, voices, bodies and gaze. It seems as though this is not an idealised vision of a united society, this is the real thing – polyphonic, diverse, and complex.

Claudia Graue kneels on a mirrored surface and moves her arms across it like pistons, matching her industrial movements with the vocalised rhythms of a printing machine. She then retraces the patterns and describes a day of childcare and housework, while a sewing machine hammers away in the background. Is it a reminder that, while women were a vital part of the workforce in the GDR, they still shouldered the vast majority of the housework? It could just as easily be a comment on our current society’s failure to properly acknowledge female labour.

Yvonne Sembene then takes centre stage and strikes coy, elegant poses, smiling performatively. She breathes heavily, increasing the volume to ensure she is heard over the other performers. Again, is it a museum display from the future showing how people identified as women were once objectified and sexualised? Or a proposal as to how female sexual and bodily autonomy might yet be achieved? That is what makes POSTOST 2090’s temporal gymnastics so interesting; the blurring of lines between past and future, reality and utopia, creates an ambiguity which opens up a world of political and artistic possibilities. If our present is the hazy moment existing between interpretations of the past and visions for the future, it is a space which the work occupies intelligently and wholeheartedly.

Accompanying the performance is the POSTOST zine, a collection of texts from and about women in the GDR, overlaid with additional writings and annotations from the team. And that is what the piece itself feels like – a genuine celebration of GDR feminism, stamped with distinctly intersectional contemporary voices. At one point, Sembene and Pham Minh Duc move explosively through the space and jump on a trampoline to pounding music, an outburst of movement which invokes joy, defiance, anger even. A roll call of names is projected onto one wall, flashing by so quickly it is hard to make them out, though I catch the names of some feminist thinkers and transgender activists. Finally, the slogan “Nothing about us without us” remains, a stark reminder of the historical and current marginalisation of certain voices, and of the urgency to listen to them now.

“POSTOST 2090” feels like an experimental advanced grammar class, reeling off the past imperfect, present progressive, and future conditional, before suggesting they might all be used interchangeably. The piece’s inherent contradictions are encapsulated by its final words, as the cast read and sing what sounds like a call to arms in an imagined East German dialect from the future. German has a reputation as a language with a word for everything, and I find myself wondering if it has one for the new feeling which POSTOST leaves me with: nostalgia for the future.