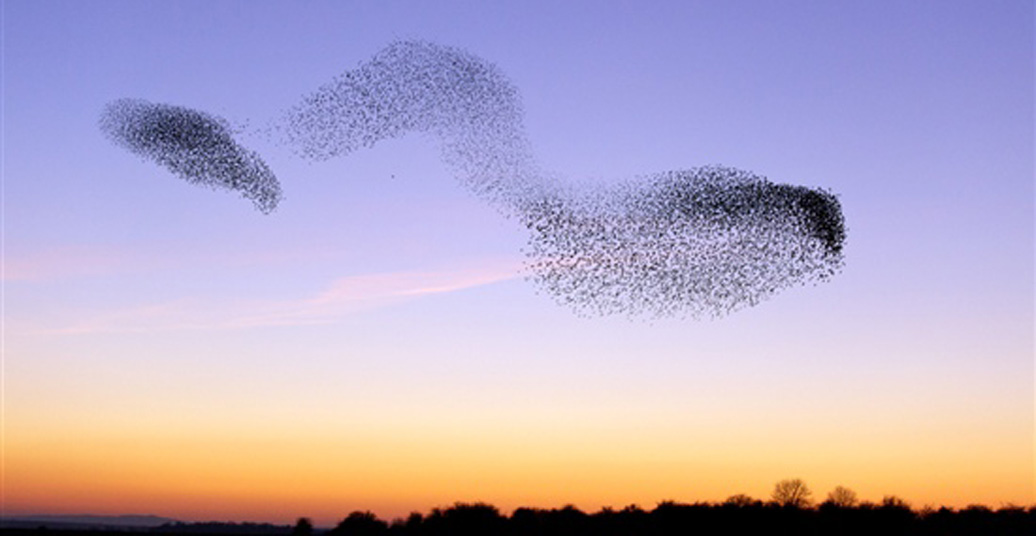 Inky Lee writes about her personal experience around rehearsing and performing in an unnamed work. The piece premiered in Berlin and consisted of three parts performed in three different locations.

It was the first time that I saw a murmuration of starlings. It was the first time she sat next to me. It was the first time we had a conversation. When I looked up ‘fantasising’ to check the spelling, the first article that popped up in my search results was about how fantasising wrecks your mental health. The article opened with a huge photo of four white people smiling. It was written by someone named Brianna. She had blond hair, blue eyes, and a very symmetrical Barbie-like face. Brianna wrote that those people who live in ‘reality’ (which is the opposite of ‘fantasy’) experience less fear and feel more fulfilled and calm. But what about those people whose realities repeatedly reinforce an experience opposite to calm, and that need to escape into fantasy in order to feel some fleeting sense of joy?

The murmuration of starlings was mesmerising to witness. Thirteen of us were drinking wine, celebrating the premiere. She was sitting on my left. The birds were dancing their surreal composition. I was drinking wine to steady my nerves, because I was feeling shy, although I haven’t been drinking much these days. Murmurations are an act of survival — to stay warm, to communicate, to ward off predators. Through the week of rehearsals and performances, my fantasies around her (I will call her ‘R’) were my survival tactic. When she entered my orbit, the thin air around me thickened and held me in place, so I didn’t slip through it and vanish.

The first question I was asked, by another performer in the group, when I came to the first rehearsal was: “Where are you from?” I cringed a bit as I replied, “Do you mean originally?” The questioner was from Finland. She had blue eyes and blond hair, and turned out to be a kind person. The choreographer also had blue eyes, and so did R. All those songs and poems about blue eyes have never touched me, but somehow R’s blue eyes did. I think they first began having an effect on me while I quietly enjoyed listening to R talking back to the choreographer during feedback time. Cycling home, there were two guys walking. A white woman overtook me on her bike and passed them. Nothing happened. As soon as I cycled past them, however, they began hollering, laughing, and making loud noises that made me feel like an animal in a zoo.

In the morning before the next rehearsal, I walked down my street to see a doctor. A man on a powerful looking mountain bicycle rode past very close and muttered something nasty in my face. In the doctor’s office, there was a huge painting of a beautified Buddha hanging behind the old German doctor. Next to him sat a young muscular man with blue eyes and blond hair who stared directly at me. I was there to get a piece of paper to finally start therapy (I’ve been looking for a therapist since May), in the hope of figuring out ways to navigate the daily harassment I experience. When the doctor asked why I wanted therapy, I fell silent. Both men stared at me for a while, and then the doctor finally suggested: “Situations at your work? Dealing with your job?” I answered him quietly, “Dealing with existing every day in public and private space.” He asked if I felt fear without any cause. I answered that I had felt fear in the recent past because there were harassers and stalkers around my house. He told me to wait outside and then took a long time to write out the document. It read: The patient feels discriminated against. ‘But I am discriminated against!’ I thought immediately. However, I accepted that this must simply be the medical terminology that they use.

I arrived at the rehearsal feeling quite overwhelmed, but soon calmed myself down by reminding myself that this was a safe space occupied by aware artists. I was shy to speak to R or even look at her. But during the rehearsals, I was able to sneak a glance. When she entered my periphery, the space came alive with electric colours, and the air around me grew soft and dense, and warmly enfolded my body. During the mid-session feedback time, I squatted down to rest. Immediately, two other artists imitated me. A third joined them in their imitation and exclaimed, “Oh, this is totally Asian!” She then went on to say, “Hey, we’re all ladies here!” I was mute with shock. I hate being called ‘a lady.’ I also thought of many of my queer friends who may pass as female, but would fiercely object to being called ‘a lady.’ My delusion of being in a ‘safe space’ shattered, and from this moment on, I felt the muscles along my spine growing so tense that it became painful to walk. With every step, I chanted internally, “Let it go, let it go, let it go.”

Right before the next rehearsal, I attended the opening hour of an online conference on Dance & Racism. After a passionate speech, the first speaker apologised for being too loud. “I’m sorry,” she said, and was silent for a moment to let her apology sink in. My heart broke to witness her apologising for speaking her mind. As I cycled to the rehearsal, a few guys hollered some racist shit at me and I gave them the middle finger. As I got closer to the rehearsal space, I felt an unexpected rush of resistance. I stopped and gave myself a moment to think of all the positive things about being there: the big open space, the beautiful sky, R. I cycled on. Throughout this day of rehearsal and performance, I chanted internally with each step: “I am safe, I am safe, I am safe.”

That was the day R and I first spoke. I was so shy that I kept on laughing, until she asked me why I was laughing. I had to take a moment alone for a shy laughter break before I could face her and talk to her again. I noted that I liked how her voice and her body seem to travel separately from one another at times, each with distinct and different qualities. She showed me a music video of a 16-year-old French artist singing about having a good life. “Yeah,” I said out loud to the singing figure, “you can have a good life because you’re cute! (and French and white).” I did not say the part in parenthesis out loud, because I was enjoying my escape into my fantasy-zone.

Right after my last performance had ended, I cycled to catch another part of the performance happening at a different location. A performer declared solemnly, “The horizon is a straight line.” I remembered when I was cycling earlier and wondering why I enjoy riding along a very straight path, but do not enjoy very straight people. I looked at the setting sun and the sky full of the curvaceous lines of graceful clouds, and thought, “My horizon is not a straight line.” R appeared in the space. The air exhaled and softened. The colours grew more saturated.

The evening turned into the night and the entire group of participants sat together to celebrate the final performance with wine and soup. R sat on my right. The stars began to appear. I lay down and gazed up. R lit her cigarette. As the flame sparked from her lighter, I turned to her. “I like your light,” I said.

“The smoke doesn’t bother you?” she asked.

I love myself for my love, a dubious gift. This line from Eileen Myles’s poem, November, trickled down my spine. Love, or, perhaps more accurately, my capacity to indulge in fantasy, is surely a dubious gift. But it can also be a useful one for finding ways to survive with some joy, wit, and heart.