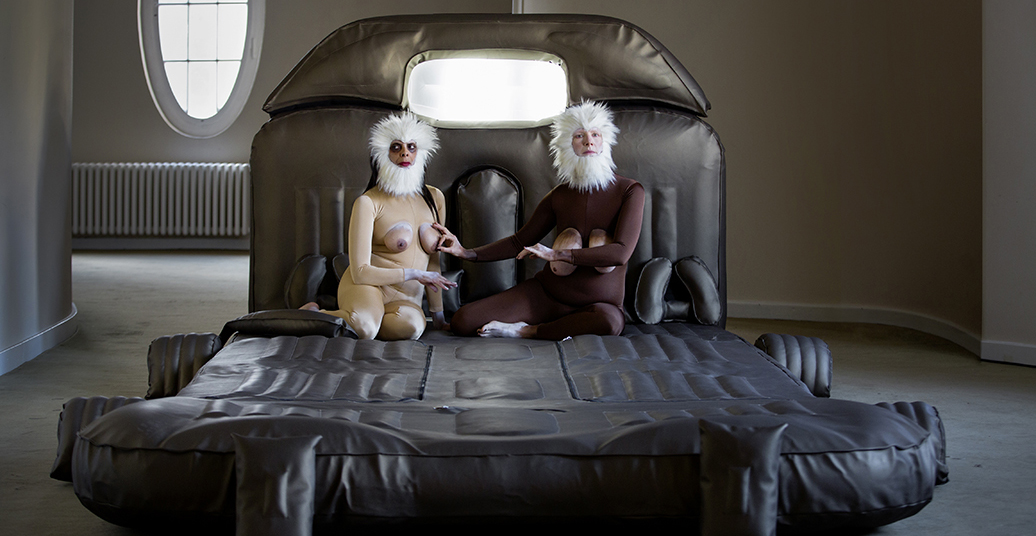 On the opening night of the first part of Tanznacht Berlin Vertigo (9-13 September, the second part will hopefully take place in July 2021), Antonia Baehr and Latifa Laâbissi land in Studio 5 at Uferstudios where they merge with the chimpanzees Consul and Meshie.

Chimpanzees Consul and Meshie both lived with humans at the beginning of the 20th century. Consul incorporated so much human behaviour in his animal show that he was known as “the famous monkey man of the stage”. Meshie, meanwhile, lived with the Raven family and was considered one of the children by their father. The programme notes state that Baehr and Laâbissi will adopt their own apish identities in the piece, and ask, if apes can behave in a humanlike way, can we as humans find the apes in ourselves?

We enter the studio, and, in the middle of the space, a large mattress is visible. This ingenious installation by visual artist Nadia Lauro is designed to resemble the backseat of a car. Baehr and Laâbissi are hanging out on it, scratching one another. We sit scattered around them, on little mattresses of our own. My sitting soon becomes lying down. We are welcome to remain in the space for the next three-and-a-half hours — we’re also allowed to leave earlier or come in later — so I might as well get comfy. Baehr and Laâbissi are dressed in shiny ape suites with their breasts hanging out, and their faces surround with circles of white ape hair. They wear nail polish.

In the first part of the piece, they embrace the animals within them fully. With big alert eyes and a sudden stillness, they respond to every sound that is made, both inside and outside the room. Laâbissi scratches the top of her head with her long fingernails, and shakes imaginary fleas off her leg. Baehr pulls up her nose and upper lip to show us her teeth while grunting softly. Then the mattress reveals its secrets: It’s full of hidden compartments! The first thing that is taken out of it is a memory game featuring French theorists. While playing it, Baehr displays some unattractive features of humankind — gloating when she wins, sour grapes when she loses — and combines them with physical outbursts, such as pounding her fists on her chest. Laâbissi seems to be the more stoic one. “There are a lot of French people here,” she states when she turns a card over, ignoring the ever-changing moods of her colleague.

We watch a constant shifting between, or perhaps more accurately, a constant merging of the animalistic and the human. As well as the memory game, Lauro’s installation also reveals an iPod with a bluetooth speaker, an embroidery kit, notebooks, jewellery, an apple, reading glasses. The scratching and the alertness remain throughout the piece, but alongside them, a palette of more human characteristics pass by. We witness greed when Laâbissi asks for the gold fillingsfrom Baehr’s mouth. We see the need for love and comfort when they both lie down together, or when they sing for each other. We encounter the necessity to philosophise as they talk about the future and past. We feel their desire to create and learn when they draw and dance and learn each other’s languages (“Affengeile Titten, schööön!!”). Together with a song about a humanoid, and with references from Kubrick’s film 2001: A Space Odyssey it collectively brings the evolutionary theory that humans are descended from primates into focus.

As time passes, however, I begin to notice that any earlier distinction I had drawn between the behaviour of humans and that of animals fails to hold out. Every feature portrayed in the piece — physical, emotional, or intellectual — seems to befit humans just as well as it does animals. Consul and Meshie, or Laâbissi and Baehr, spend their time in their artificially created habitat and I lie next to them. I am intrigued by these two creatures in space, who, after a while, seem so natural and familiar that it feels like they are no different from the rest of us who inhabit this world.