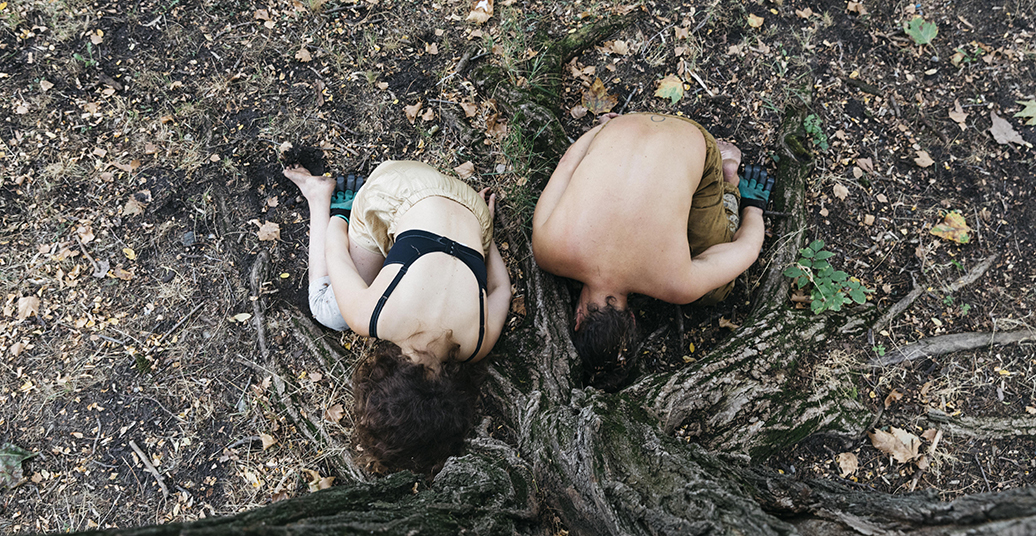 Down to Earth hinterm Gropius Bau: „The Opposite of a Shadowland“, Gradinger & Schubot ©Eike Walkenhorst
7. September 2020, Katja Vaghi

Under the title “Down to Earth: Climate, Art, Discourse Unplugged”, this exhibit at Gropius Bau from 13 August to 13 September 2020 focuses on ecology and sustainability. It is part of the Immersion program series, which aims to experiment with new formats of looking and presenting and to dissolve the dichotomy between the viewing subject and the object being viewed. This time around, indiginous cultures and new practices in sustainability and the holistic experience can be seen alongside experimental forms of contemporary art.

“Down to Earth: Climate, Art, Discourse Unplugged” is the sixth and simultaneously last installment of the Immersion program series presented by the Berliner Festspiele since 2016. Following the initiative of Artistic Director Thomas Oberender, a team of curators (Julia Badaljan, Thomas Oberender, Anja Predeick, Tino Sehgal, Jeroen Versteele), inspired by philosopher Bruno Latour’s book “Down to Earth”, invited myriad experts and artists to discuss ecology and sustainability in our everyday lives and also to take action. Far, and yet so close, our carbon footprint is often so foreign to us and is relegated to the realm of politics. The contributions are therefore a call to individual action. They’re not just an appeal. They also reveal a political stance since the entire exhibit has been realized as climate-neutrally as possible. The aim of the Immersion series is to experiment with new formats of looking and presenting in order to dissolve the dichotomy between the viewing subject and the object being viewed. We’re meant to dive into something new and unknown: this time around, various indigenous shamanic cultures and new practices in sustainability and the holistic experience can be seen alongside experimental forms of contemporary art in daily changing live offers and presentations – including Latour and Frédérique Aït-Touati, among others.

The atmosphere in Gropius Bau is different than usual. More familial, shifting from hour to hour with the variety of contributions. It recalls the ambience of a salon – taking place with Covid measures with masks, distancing, and time slots (entry during a certain window of time). A certain group dynamic can be observed since the artists and experts often visit each other in their respective spaces.

During the two days last week when I visited the Gropius Bau, the performing arts guests alternating in the performance space also included François Chaignaud and Marie-Pierre Brébant with their “Felices Radices”, which builds on Hildegard von Bingen’s musical work. In a semicircle, we dive into a kind of meditative opera, accompanied by Chaignaud’s voice and Brébant’s bandura and mesmerized by their torsos covered in triangular mirrors. Colorful curtains covering the windows replace the spotlights in order to structure the choreographed scenes for the various songs. For Claire Vivianne Sobottke’s “Velvet” and “L’animale”, the room was covered with a circle of soil, trees, bushes, and grass. Two drums appear to invoke Sobottke, and she throws herself awkwardly and clumsily into the center, accompanied by trombones, a horn, and a spinet. This is followed by intense images of violence against the female body, which lead to a ‘counter’ ecstasy or negative transfiguration. Fall upon fall, the echoes of Pina Bausch’s “Rite of Spring” (1975), Mary Wigman’s “Hexentanz (Witch Dance)” (1926), the whites of rolling eyes and flapping tongues of butoh spirits ensue. Layer by layer, she sheds her clothes and Sobottke’s body is increasingly smeared with dirt. She has become an animal, she licks herself and plays with her tail until she beckons us in guttural tones to play: we have to toss her branches or objects. I had to wonder: who was the animal, her or us? At the same time, Jared Gradinger and Angela Schubot took part in “The Opposite of a Shadowland” ritual in the back courtyard to re-naturalize the public ground. On their knees, singing and whistling gibberish, they reseeded an abandoned meadow, nearly becoming a part of it themselves. This idyllic scene creates a stark contrast to the rough and arid white gravel of the Topography of Terror in the background.

I originally wanted to use the exhibit as an opportunity to write about performance art and the performative body in a museum setting. It isn’t possible for me to do so with this exhibit. It emphasizes a special body and a way of being, which I wasn’t aware of before in this context. It is not an “ego-centric” body, on display for everyone to see. Rather, it is to be seen as a fragment of something larger, as a part of nature, a part of Gaia (Latour). It disappears. It is decentralized.

“Down to Earth” is a colorful mix of exhibited works, readings, workshops, showings and much more (I just checked whether I could get my electric tea kettle, which recently bit the dust, repaired in the popup repair cafe). The exhibit is informative, poetic, and simultaneously a bit bizarre. The main thing is: it forces us to reconsider so that we can transform our lives, sometimes just with banal interference, so that we leave behind a smaller carbon footprint. You can still visit “Down to Earth” in the Gropius Bau until 13 September. Meg Stuart / Damaged Goods’ “Signs of Affection” will be showing twice that day.

Read more about the programme series Immersion and in the Berliner Festspiele Blog Immersion.