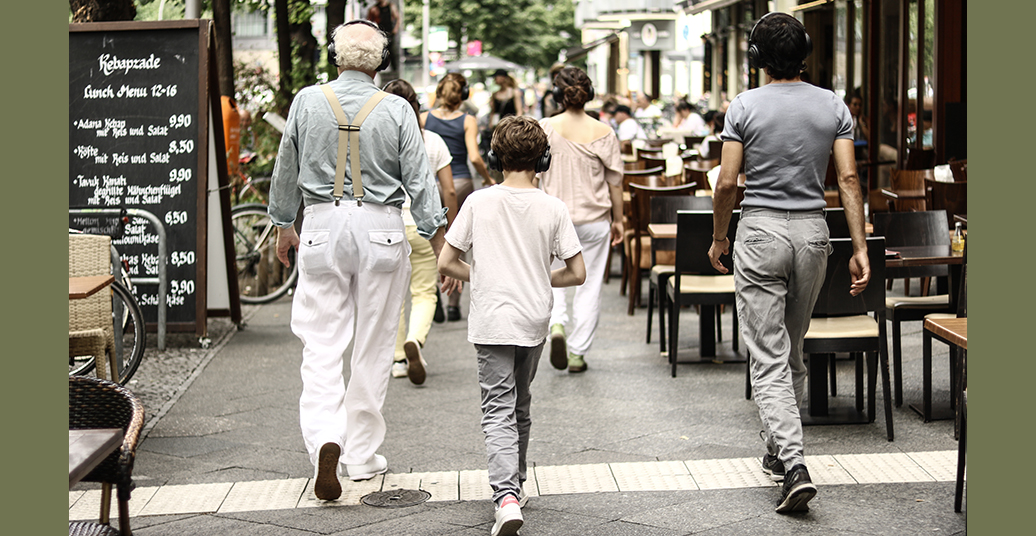 It’s the fourth of September and five old men are playing a game of boules, while a soft sun peeks through the tall trees. I’m sitting in front of FELD Theatre for Young Audiences in Schöneberg, an area that is unfamiliar to me, and I allow myself to soak up the holiday atmosphere in anticipation of the premiere of Jo Parkes’s “The Walking Project”.

The five other audience members and I are handed headphones and wait standing in a row under the trees. I’m still caught up by the boules match when a voice through my headphones tells me that my guide is approaching. I turn around to discover six performers, all of different ages (I find out later that the youngest is only 10 years old, while the oldest appears to be in her sixties). A guessing game unfolds as they come closer to us, circling around each other. Who will I spend the next hour with? Who will be my guide? It’s Aymara von Borries. She has a very friendly face. We start to walk.

For Jo Parkes — and many others — walking has been a saviour during the pandemic. To be able to go out and explore the empty streets of Berlin, contemplating on this transformative time and putting one’s body into action in a world that has come to a stop has been of great comfort. Parkes herself was in the middle of developing her intergenerational project “Work of Hope” when Corona struck, and the work came abruptly to a halt. She decided to turn it into the “Walk of Hope”, a.k.a “The Walking Project”.

So I walk, with Aymara leading the way at my side. She looks at me and smiles softly. Although I glance back at her face now and then, her feet demand all my attention. My task, which was given to me by the voice in the headphones, is to follow her pace, her rhythm. So I accelerate when she does, slow down when she does, and start hopping as we move through a playground. The sonic bubble created by the headphones envelopes me, and together with Aymara’s guidance, I feel a sense of support, but also distance to what is happening around me, as if every accidental passer-by is an extra in this outdoor performance. Aymara asks me to sit on a bench while she performs for me, moving back and forwards on her feet, playfully crossing the street to create a little duet with one of the other performers.

When we start walking again, the voice in the headphones tells me to focus on my own legs as well. The legs that make the walking happening; feel your feet on the street, your knees bending, your hips moving. These small instructions create an awareness of and a thankfulness towards my body — the body that has already taken me to so many places, and on so many other walks. I gain confidence and find myself crossing a big square at a fierce pace. I don’t have to look at my guide or her feet anymore. We’re in sync, so we can look around at the streets, the houses, and the people inhabiting the space. I smell the spices from the Indian restaurant on the corner.

After an intermezzo where all performers come together and share a dance on the street, the words entering my ears from the headphones become more philosophical. As we’re standing against a wall, we hear a story about someone taking a step, another step, and another step unfolding. Step by step, she heads south from Berlin, until she finally disappears into the Alps. Another voice shares her thoughts with us — thoughts about hope, and about pessimism and optimism. What sticks with me most from this story is the idea that hope is something that can be trained and developed. Hope as an act. A doing.

The six pairs, guides and audience members, all end up together in the same place where we circle around each other in different patterns and with different paces till we come to a stop. As we walk back together, our headphones still on, I still feel the possibilities in my body and the joy of walking, and the comfort of being alone, but always connected to others.