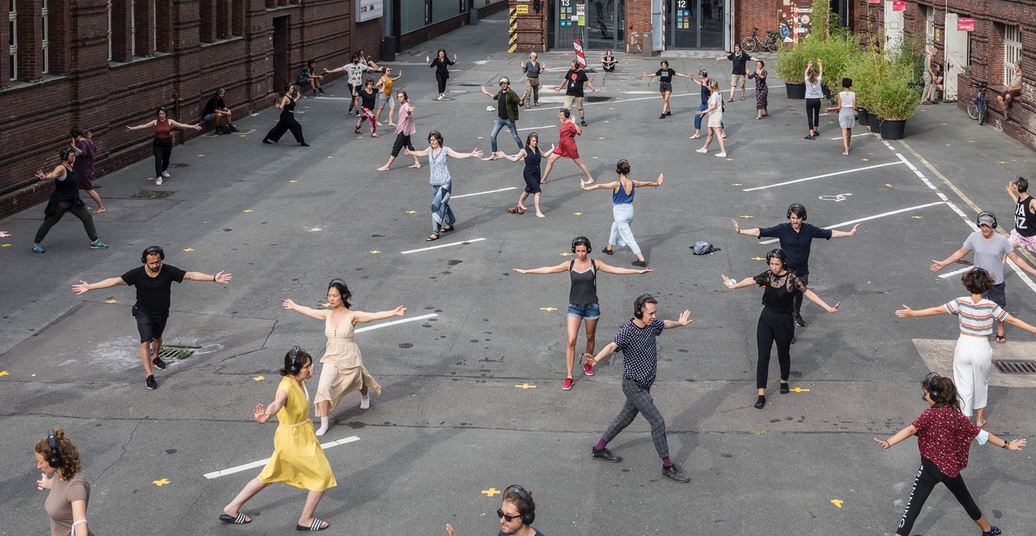 This year, in lieu of its scheduled stage program, Tanz im August is offering an online selection of talks, films, and sound works, a digital conference, and two works in public spaces. Media and performance art collective LIGNA gives the participants in “Zerstreuung überall! Ein internationales Radioballett (Dissemination Everywhere! An international radio ballet)” an opportunity to practice a dispersed collective with the help of acoustic prompts, while still keeping to themselves.

“Surrender to the now” are the final words we hear through our headphones. The now is reality: the pandemic. Which is also the reason why all 130 of us participants are in the Uferstudios courtyard, every man and woman for him/herself, in a group of more or less strangers. During the last hour, we listened to instructions from twelve international dancers and performance artists who were asked by LIGNA to develop a radio ballet adapted to the COVID-19 situation. Twelve – but then not – different movement instructions were created, which we heard one after the other, though not always clearly distinct from each other, through our headphones. Each of us on our own, and with three meters between us if at all possible. Sometimes it was more aerobic, sometimes more like mimicking typical animal gestures, sometimes a game with rhythm and counterrhythm. A funny prompt that has us sniffing at our own armpit sweat and a brief digression on Walter Benjamin and solidarity. Again and again, we are asked to explore the space between us, the air we share, the spaces that separate us: “Explore the distance in solidarity”. An instruction, to consciously perceive and test the invisible (solidarity as well as air) between us. It is precisely this area, which separates us from one another and connects us, that is choreographed. The movements that arise belong to no one – rather, they arise between us and the radio voices: it’s referred to as the “contagious dispersed collective”. What kind of collective is this, which is potentially infectious and therefore dispersed?

It presents itself as a swarm with no center, no periphery, an open web of relationships in actu, a “dispersed mass” (Benjamin) yet completely isolated to the outside. Understandably, concrete relationships between participants remain sporadic and distanced. The distance requirement bars a lot. But the invitation to dance with one another at a distance bores and depresses me. Why isn’t this solidarity within a collective accessible to me? Will the opportunity to simultaneously experience “Dissemination Everywhere!” on 30 August here in Berlin at Tanz im August and at the Zürcher Theater Spektakel and the Theater Festival Basel make a difference?

It’s primarily awareness movements, which we are repeatedly instructed to carry out. We should concentrate on our breathing, connect to the floor, sink into it, let it vibrate, explore the surfaces around us. But I’ve been doing that for five months: to surrender, to breath, to be in the here and now. I become aware of how very tired I am of just concentrating on myself and my body awareness. I’m bored and slightly depressed with this lingering in my own isolated here and now.

The high walls enclosing the elongated courtyard of the Uferstudios and shielding it from the rest of the city transform boredom into a sense of anxiety. This interior courtyard, blocked off from the outside world, whose entrances and exits are being monitored by HAU staff, prevents the mingling of performers and the chance, unintentional viewers just passing by and so crucial to past radio ballets. I miss their curious or uncomprehending faces and unpredictable interactions. But the walls leave no room for the unchecked.

Are these perhaps the exact uncomfortable feelings of boredom and anxiety, which “Zerstreuung überall!”, this new radio ballet by LIGNA, wants to trigger in us? An attempt to make amends with both these feelings, which now rule our social lives across the globe, while still remaining in motion? Self-abandonment to this Corona reality, not as a form of submission, but rather in search of our own potential for movement?

I leave the Uferstudios courtyard somewhat unsatisfied and cycle back to HAU2 where a public viewing area has been set up so we can watch the live stream of the daily online program together. The library, expanded every year with book recommendations from the artists involved, is here as well. From LIGNA, I not only find Walter Benjamin, but also Judith Butler’s “Notes Toward a Performative Theory of Assembly”, which emphasizes the significance of the physical presence of collective actors in public spaces.

Dispersed, bored, and baffled, I open up the Benjamin volume: “Distraction as provided by art presents a covert control of the extent to which new tasks have become soluble by apperception.” I cycle on, somewhat more relaxed.