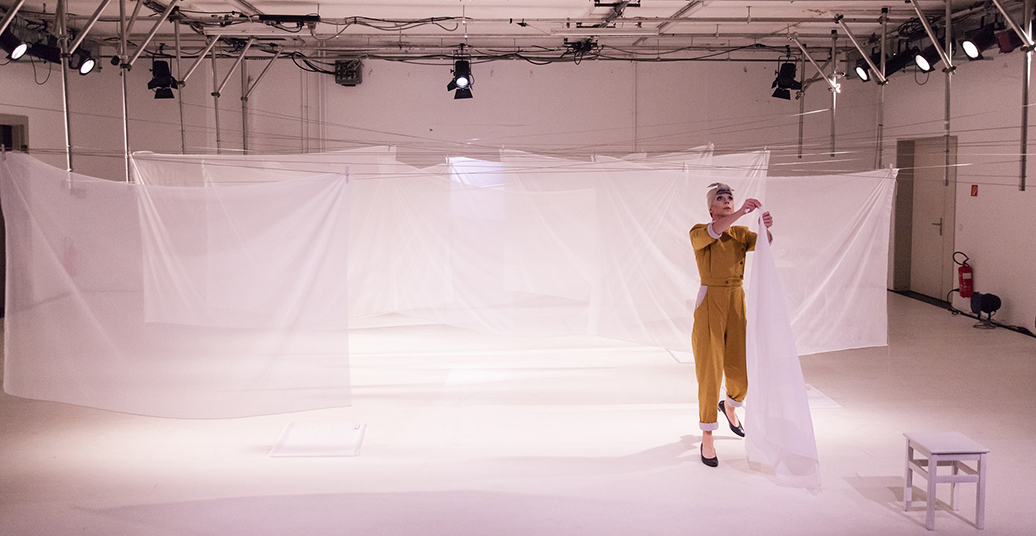 “The Touch of the Other”, Olympia Bukkakis ©Mayra Wallraff
10. October 2020, Jette Büchsenschütz

As a kick off to the Risk and Resilience festival, Olympia Bukkakis tells a very personal story of crisis, one in which she ties her own story as a drag performer with that of her female relatives, in “A Touch of the Other” at the Sophiensæle .

The beginning of the piece takes its sweet time. While the audience enters the Hochzeitsaal, Olympia Bukkakis is already sitting in the back corner at a sewing machine and cutting a thick piece of fabric in front of her. The stage is filled with clotheslines diagonally stretched at face level between the side walls and crisscrossing in the middle of the room. Below them lay precisely folded white sheets and clothespins. The gentle rattling of the machine has a soothing effect, like a lullaby. Her costume, consisting of overalls, a turban and pumps, simultaneously invokes three distinct female social roles. It is reminiscent of working class work clothes, the housewives of the 1950s who were called back home from the war factories, and – with the shoes – their responsibility to offer a pretty picture, unspoiled by the image of housework, to their breadwinning husbands returning home from work. “We can do it”, was the slogan on the iconic US American poster from World War II whose call to action was seamlessly transferred to the postwar era. The beginning of the piece – dramaturgically clever staged – takes its sweet, sweet time.

Hailing from Australia, Olympia Bukkakis has been a fixed figure in the alternative drag scene in Berlin since 2012 as a non-binary trans-drag performer. While her last piece “Gender Euphoria” was still strongly inspired by traditional drag cabaret and embraced the character of an entertaining and amusing drag show,  “A Touch of the Other” is strikingly calmer, more pensive, more emotional – and much more private. Because the piece’s material primarily stems from the stories of four of her closest female family members: her mother, two of her aunts, and her little sister.

Bit by bit, their oral tradition, in the form of interviews, is played back from offstage and via lip sync by Bukkakis, who effectively incorporates their experiences. They talk about typical women’s work, the burden of responsibility for children, badly paid jobs, and the inner conflict with striking as a nurse (but thankfully Brian has an income).

Olympia finally finishes her sewing and devotes herself to hanging the laundry. Unhurriedly, indifferently, mechanically, one cloth after another is pinned on the line. The female, private workspace is characterized by reproduction: always the same, repeated tasks (cooking-washing-cleaning-laundry-shopping).

“No subject is its own origin”, Judith Butler writes in “Gender Trouble”. Its constitution itself – and as such, that of gender as well – is a process of hegemonic alignment and regulation through discourse and social norms. But how do we escape this mechanism, circumvent it?

Hacking everything to pieces, the strobe light marks the start of a crisis. Protected by the semi-transparent cloths, Olympia Bukkakis removes the pumps, quivers, falters, stumbles, trips, and disturbs the meticulously hung sheets. She appears increasingly more confused, hectic, as if she is about to explode. Nothing remains of the rehearsed behavior she had maintained up until now.

Is now the moment for what the program promised us: resilience strategies? Equipped with a mobile phone and bluetooth loudspeaker, she attempts to discharge the pent up emotions of her reined in energies in a dance choreography – to sublimate. Over and over she starts anew, fails, repeats, fails… A seemingly endless loop: “A Woman’s work is never done”, we hear in the refrain.

This failure escalates into a final crisis, one which blocks all advancing: she lies resigned on her back, caught between self-recrimination and self-pity, and finally the song “Woman’s Work” from Tina Arena fades out. How do we manage to go on even though we’ve failed? How do we look for escapes in spite of the feeling of routine hopelessness?

It is these drawn out passages and pauses, which wear us out at first glance and test our patience – but lend the piece a fitting tempo and emotionality, which have little to do with a conventional, entertaining drag show.

After we have endured a few of these scenes, have been forced to feel the standstill and tormenting hopelessness, we are rewarded with Kate Bush’s “This Woman’s Work”, which Olympia Bukkakis now proudly and powerfully, as if enlightened, performs via lip sync. Sublime and emancipated, she finally strides off the stage. Kate Bush’s words resound inside of me: “I know you have a lot of strength left.”

Just like our identity (and that also goes for the self-agonizing  me-ideal, which so many of us have rigged up), our gender identity also has a social origin story, one which may have shaped us, but has not determined who we are. And changing it requires a lot of strength and resilience.

You can still see “A Touch of the Other” today, 10 October 2020, at 8pm at Sophiensæle. The Risk and Resilience Festival runs through 1 November 2020.