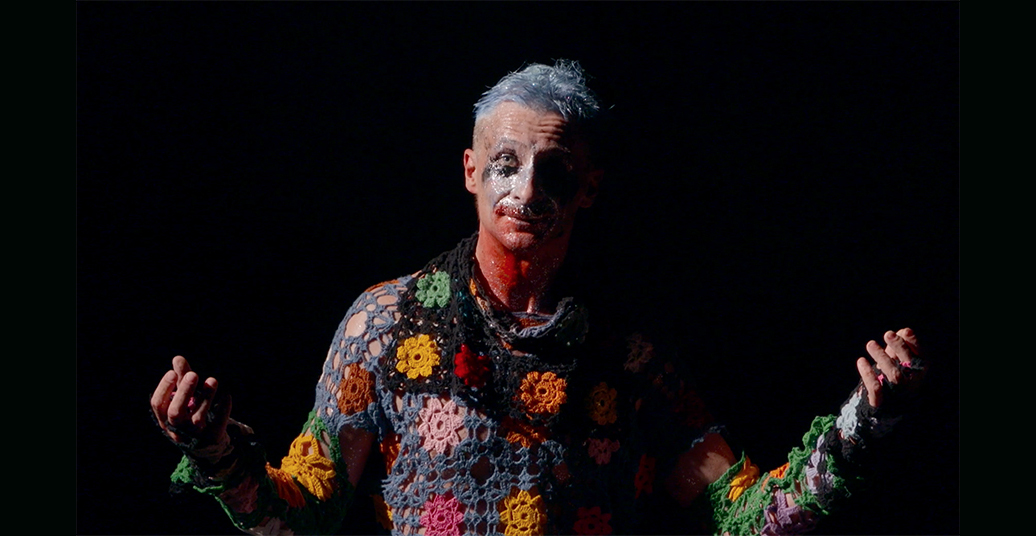 In “Retrospectrum – 5 solos for 5 decades”, which premiered at DOCK 11 on 15 October, choreographer Tomi Paasonen takes us on a deeply personal journey through his life, and his body of work thus far.

The concept of archiving live performance is a complex one; as the work inhabits a new body, or the same body at a different moment in time, it is inevitably translated and transformed. For Tomi Paasonen, in “Retrospectrum – 5 solos for 5 decades”, that process is perhaps uniquely transformative – this is the first time in over two decades of creating work that he has danced it himself.

Yet the starting point is not a choreographic history but a personal one. Paasonen recounts his childhood in 1970s Finland, and it is a story of joyful queerness. With electric blue hair, in the chiffon nightgown of his mother’s which he wore as a child, he describes dressing against gender norms for school, and scrawling huge non-normative bodies onto the asphalt outside his home. Paasonen informs us via the voice-over that, in a society where homosexuality was only newly decriminalised and still pathologised, he was nevertheless allowed to play the ‘female’ role of an angel in a school performance. As Paasonen dances, he movingly embodies that blissful freedom of a gay boy momentarily immune to the world’s disapproval.

The voice-over leads us through the next couple of decades, and their defining moments for Paasonen – his time at ballet school, his dance career and the injury which ended it early. His discovery of contemporary dance and counterculture is described in the guise of a disapproving balletomane with a heavy Russian accent. After the interval he stalks back onto stage on pointe shoes and crutches, in a white plastic dress and antlers, lipsyncing to Kate Bush’s ‘Sat in Your Lap’ – it is unapologetically camp and enormous fun.

For the final solo, Paasonen clothes himself in table coverings, crocheted by his mother and repurposed into a patchwork costume by Yuko Matsuyama. With glitter and paint now smudged across his boyish face, and the memory of him prancing around to Bronski Beat still fresh in my mind, as he speaks about moving back to Finland after his mother’s death to care for his father, it shows something about the nature of growing up which is touching in its simplicity.

At one point, footage of some of Paasonen’s previous works is projected onto the back wall in fast forward. Generally, however, the fact that the movement of the solos is pulled from Paasonen’s back catalogue seems almost inconsequential, at least in the conventional sense of a dance archive. The emphasis seems firmly placed on Paasonen as a person first, not as a choreographer – it is the fact that he is moving that matters. There appears to be no attempt to coolly take distance from the very personal subject matter, and I find myself unwilling to do so either – Paasonen is diving in head first, and invites his audience do the same.

Similarly, although there are some more abstract moments, it also feels as though leaving room for interpretation is not the main aim of ‘Retrospectrum’ either – Paasonen’s voice-over often explains to us what we are about to see. Instead, the work hinges on the frankness, charm and generosity with which Paasonen shares both himself and his story. Towards the end of the piece, Paasonen recounts how a homeopath, in treating his psoriasis, told him ‘You are too translucent – your body is trying to create a border between you and the world.’ It may not be good for his health, but Paasonen’s translucency makes for an extremely touching work.