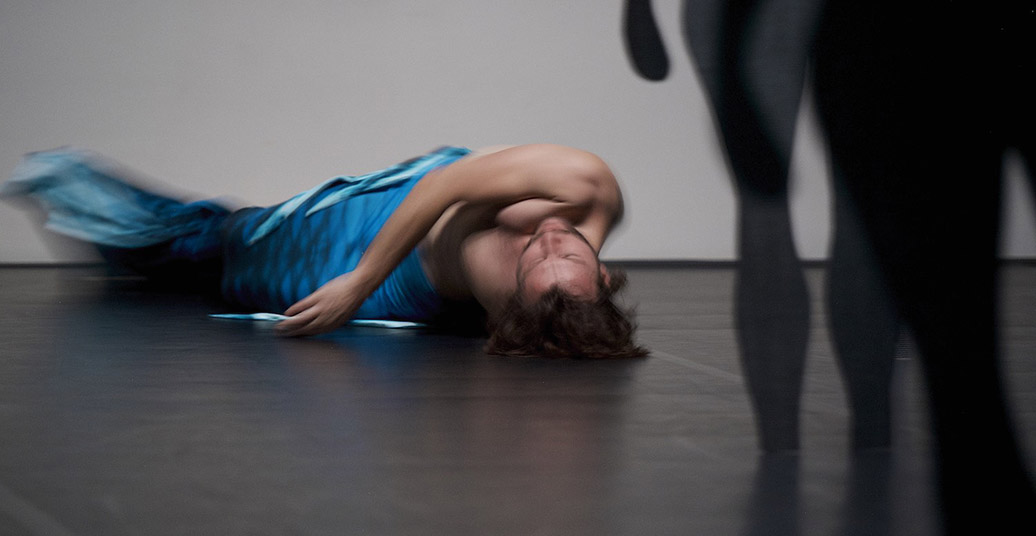 The first post-lockdown indoor performance at Uferstudios was the premiere of “Transhuman Hai” by Porson’s Khashoggi, 24 July 2020. This performance on the possibilities of artificial humanity fit well into Studio 1, which resembles an indoor swimming pool with the audience seated looking into the deep-end.

These days, trans-humanity isn’t solely restricted to the realm of sci-fi movies. The real-world possibilities of altering the body through technology — and thereby moving beyond its physical limitations — have grown and are growing every day. From pacemakers that regulate the rhythm of the heart to bionic hands that are capable not only of receiving commands from the brain, but also of touching and feeling through connections with the nervous system. At the other end of the spectrum, a humanoid robot named Sophia had social conversations with her visitors, and robot dogs are used in elderly care to fight loneliness. These are just a few examples in a vast and thought-provoking world, some elements of which are simply beyond the bounds of my imagination. What would happen to our identities if we didn’t have physical bodies anymore, but rather existed merely as uploaded minds? Could one fall in love with a robot? Or is this distinction between robot and human already far too binary?

“Transhuman Hai” by Porson’s Khashoggi (Xeni Alexandrou and Andrea Rama) aims to tackle some of these questions. Their work is dedicated to “the vision of overthrowing the established notion of the human body as an organic system.” In order to do so, they’ve created a sterile laboratory for “Transhuman Hai” in which — according to their programme notes — personalities will be encoded into computer chips, and preserved brains implanted into the skulls of brand-new clones. That laboratory has been aesthetically portrayed by fifteen or so large grey cardboard bodies without feet that hang around the room. Many of them are suspended just centimetres above the ground. Judging by the curve of their hips, the female body has been taken as a model. These forms floating in the white space impart a deep sense of serenity that is emphasised by a living body that is slowly crawling around at the back of the performance space. The sound of dripping water makes me feel as though I’m looking into an underwater world in which time has been slowed down and movements are ponderous. This is even before I realise that the body at the back resembles that of a merman with a big blue tail instead of legs.

These first few seconds of serenity are brutally disrupted by a soundtrack made up of fragments of sentences repeated over and over again with apparent randomness. They seem to be texts taken from fiction or documentary films and each has a specific soundtrack underneath it. These snippets talk about topics such as morality, character building, psychology, claustrophobia, books. The soundtrack is so overwhelming — so intense and constant — that it becomes difficult to pay attention to what’s happening on stage anymore. I feel relieved when we’re given a break from the barrage of words, even though it is in the form a song, instead of the silence I’m longing for.

In the meantime, another figure has appeared on stage. She talks to us in Italian, but her words are drowned out by the soundtrack. She walks among the suspended bodies, touching and caressing them — but there is no warmth in her touch. The lighting design reveals the previously invisible transparent fishing wires the bodies are suspended from, with multiple bodies hanging on each thread. She slides them to one side, forming a group. It’s interesting how her touching and manipulating the bodies makes them seem even more inanimate — even more obviously made of cardboard. It’s the human body here that is unambiguously in control of the material. I let out a silent cheer for the one cardboard body which breaks as it is handled. The resulting bend feels like a sign of rebellion.

All the while, the merman has continued along his trajectory through the space. Due to the lack of water, his journey to the front of the stage has been heavy, as though he has had to drag himself. Even so, his arm-movements are still somehow soft and flowing. Half-man, half-fish, he survives by doing whatever he can in the conditions he is given. At one moment, the human performer leaves the stage, walks to the rail along the edge of the ‘pool’ and leans over it, looking down on the laboratory beneath her. From this position of apparent domination, even the merman seems to be under her control. “Transhuman Hai” left me feeling confused. I had expected an exploration of the messy interaction and intersection between the human and the non-human, and the possible futures arising from that. In the images that this work creates, however, humanity appears to overpower trans-humanity at every turn.