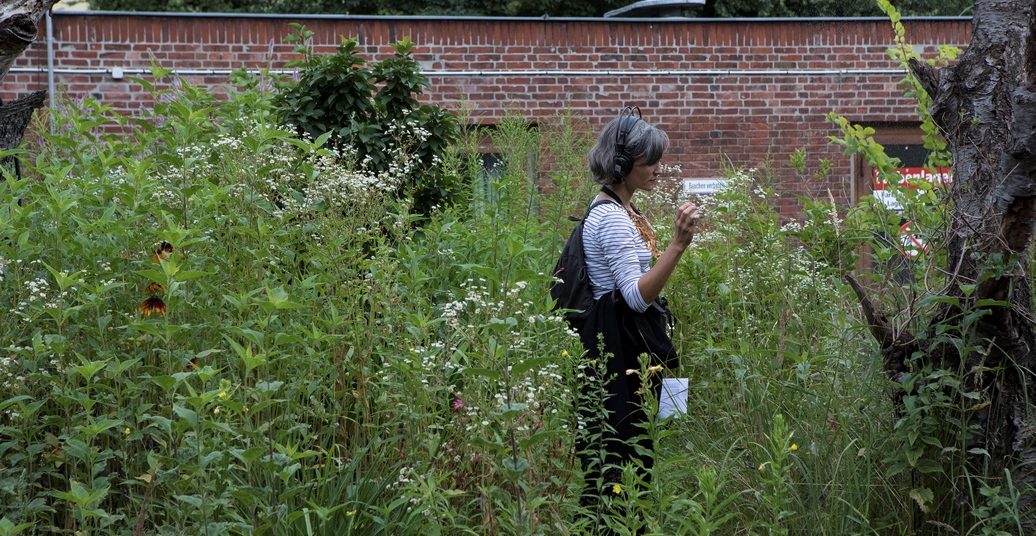 Tanzfabrik’s Time to Meet: Down to Earth — a festival as an experiment —  was curated by Juan Gabriel Harcha, Elisabeth Leopold, and Felicitas Zeeden and offered a playground for artists to unlock our imaginations in the courtyard of Uferstudios.

I took a hazel tree home with me. It didn’t look like a tree, though. It was just a little green sprout that seemed perfect for my one-by-two metre balcony. But under the right conditions, in the right spot and properly nourished, it would grow into a big tree, providing hazelnuts for those who cared for it and took the time to harvest them. Receiving a tree was part of the installation “Guardian’’ where one person at a time took part in a crash course in how to become a special agent and save a plant by giving it a new home somewhere else. The initiator of the project Lucy Palustris was unfortunately unable to be in Berlin, and therefore “Guardian” was taken on and developed by Juliana Oliveira.

A project initiated by one artist but presented by another was a good example of the fluid approach the curation team decided to take. After four days during which a group of artists came, thought, and created together in a kind of laboratory, ideas were shared with an audience who were invited on this 16th of July to wander between the artistic works, choosing their own order and rhythm. At the end of the evening the curation team explained that the idea for Down to Earth had originated more than eighteen months before with the aim of creating a collective project bringing together artistic voices that are not always heard in the performing arts. Over time, the project transformed many times. COVID-19 forced them to be even more flexible with the need to adjust to the online participation of several artists and limitations in production and presentation. This situation only made it even more relevant, however, to come together and work around ideas of approaching the future through hope. As Felicitas Zeeden stated: “With Down to Earth we asked ourselves what we could do to save the planet.”

This festival was more than just a showing of artistic products. It was also a gathering of potentials, alternatives, and imaginings. Small steps can impact the world — as the video installation “Landfill” by Patrica Coates a.k.a. Lucy Palustris, proved. A woman in pink stamped fiercely over a rubbish dump, and then inflicted beauty on this area by planting trees one by one. Was this a statement about all that we had lost due our need to produce and consume?

The sound-walk “Fragments of Impossible Possiblities” led us through the “Impossible Forest”, a little oasis of blooming plants, flowers, and grasses between dead tree trunks created by choreographer Jared Gradinger in 2016. “It looks like a forest, but it isn’t,” we heard through our headphones. The voices of different artists sent our minds in different directions. “What gets to count as nature?” quoted from Donna Haraway. Another voice asked us to try to imagine the end of capitalism — and was based on research that found people found it harder to imagine the end of capitalism than the end of the world. Links between racism, homophobia, and the destruction of nature were made and identified as coming from the same neoliberal world-view. The intensity of the words seemed to clash with the dreamy atmosphere of the forest, but looked at in another way, it was a combination that actually opened up new possibilities; if dead trees could become a forest in the middle of an expanse of bricks and cement, why shouldn’t we also be able to imagine the end of capitalism?

Pekko Koskinen also appealed to our imagination, but on a smaller scale. In the walking conversation “Exploring for (Im)Possible Festivals” we took a stroll together while imagining different kinds of festivals. How about a festival with only Walking Conversations? A festival of Long Views? Of Covering Floors? Of Missing Cooks, or Closed Doors, or Spots of Sunlight? As we walked, my perception of the environment began to change. I started paying attention to details while my mind drifted away, thinking up all those potential festivals. Because, why indeed were almost all festivals structured the same way? The walk reflected the wishes of Down to Earth to be something other than a traditional festival that presents a collection of works, and its ambition to be an impetus for collective thinking, creating, and being.

The most intense work of the evening was the short film “Tears of a black fatherLESSFATHER” by Thabo Thindi that alternated imagery of multiple Black Live Matters protests over the years with those of black children walking, playing, while looking at the camera. “Every black mother is my mother, every black father is my father, every shot body is my body,” one of the protestors called out. It was a statement of hope — no, a rightful demand — that those children could grow up in a world free from racism and inequality. This harsh depiction of reality pulled me out of my theatrical bubble. It screamed for change, here and now. Not just as a potentiality, but as a right.

Although the works were delivered with varying intensities, they were clearly connected. Climate crisis is linked to social inequality, and social inequality is linked to structures of production. All of these things are rooted in a capitalist system that has been constructed during history. And because it was built up it can also be taken down. In both practice and content, Down to Earth offered proposals for alternatives with the potential to break down our systems.