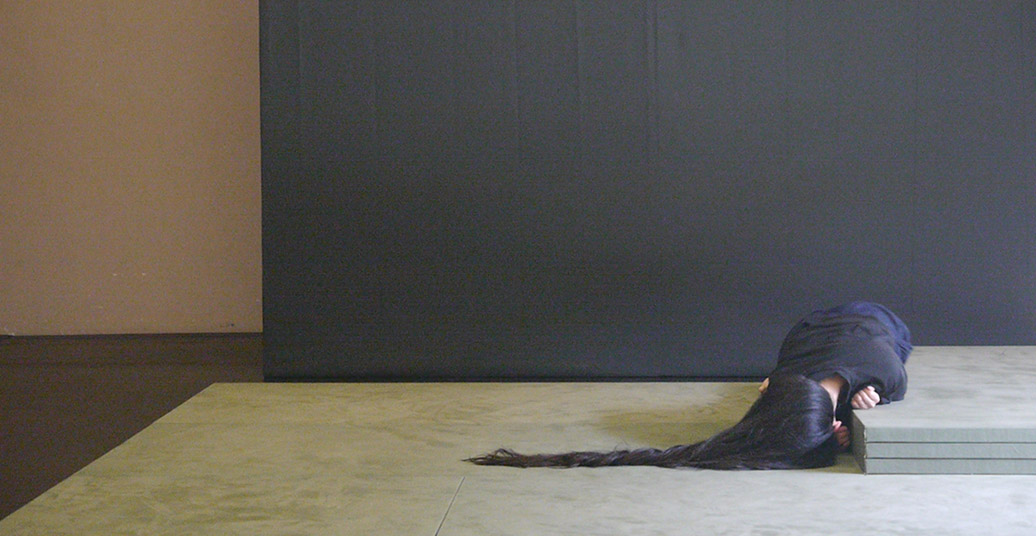 Sometimes you come across pieces that simply leave you speechless. Not because they passed us by and failed to move us. But because they touched us deeply. Regardless, I want to attempt to give an account of Isabelle Schad’s “FUR”. The showings with Aya Toraiwa were on 31 July and 1 August 2020 at the Wiesenburg-Halle.

After what felt like an eternity of writing about formats in which the body was present but always digitally conveyed, Isabelle Schad’s “FUR” was my first personified live performance. The occasion was the summer festival at the Wiesenburg in Wedding. I was consequently excited. Also, because I had never been in her wonderful studio, the Wiesenburg-Halle. The new gestures of coexistence — distance, face mask, and data collection— expand the ritual of attending a dance performance outside your own apartment. I’m thankful for choosing a piece like Schad’s “FUR” for my return to live dance. A piece where the minimalism of movement accentuates the vital body.

Emerging from the lockdown, the starting point for “FUR” is dancer Aya Toraiwa, her physical characteristics, rhythms, and energies as well as her knee-long mane of hair. Alone one a green surface with a low platform of green gymnastics mats, Toraiwa begins to roll while her hair paints spirals in our direction like a paintbrush. Rolling back and forth, she explores and defines the framework of her actions — edge, obstacle — and integrates minor variations —sometimes greater momentum with her legs, sometimes with her upper body — into her rolling.

Nearly imperceptibly, she straightens up and sits on her knees. The attention is on her hair, whose movement evokes images of gorillas walking on their knuckles, undulating and fluid dancing Medusas, Cousin Itt from the “Adams Family”, or whirling dervishes. As her white fingers comb through the long black hair covering her face, I see the demons of  Nō Theater and images of Japanese ghosts, which I know from old Japanese films  (like Kenji Mizoguchi’s “Ugetsu Monogatari” from 1953). Toraiwa’s face is — either covered by hair or because her back is turned to us — almost never visible. Her body stands for all bodies, every individual pore is expressive and exudes poetry.

In a way, the piece reminded me of a side argument from Jun’ichirō Tanizaki’s “In Praise of Shadows” (1993) in which the author talks about the patina and aura of traditional Japanese objects as compared to the almost clinically sterile Western aesthetic. Tanizaki praises the imperfect details of traditional Japanese life and style, which we know more familiarly as Wabi-Sabi. In Schad’s piece, Toraiwa’s fully illuminated body, alone on the stage, seems like it’s under a magnifying glass. Each individual movement is magnified. The simple and minimal movement sequences bring the body and its imperfections into the foreground. Thus, they celebrate the mysterious and mystical of the living as well as the sparsely furnished space of Schad’s Wiesenburg-Halle with its exposed brick and large glass windows, which  emphasize the beautiful wild nature outside.

Once again, something mysterious to write about. Mysterious because words are not enough to explain it. You have to have seen it.

Next dates: Guest appearances of “FUR” i.a. in Ljubljana (November 2020, tbc) are currently being organized. There will be additional performances in Berlin in 2021.