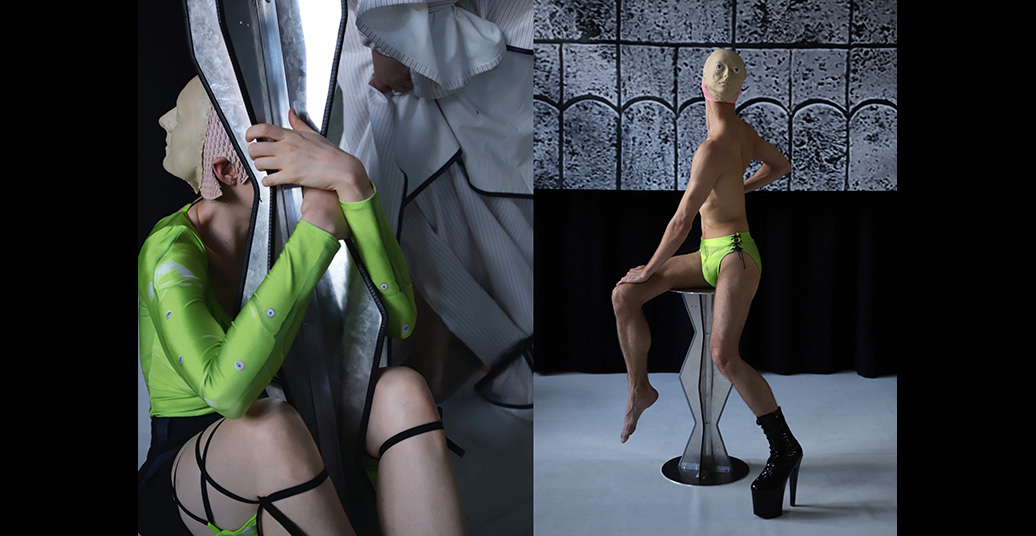 TANZPLATTFORM 2022 >>> Julian Weber’s “Allongé”, which premiered on 31 October 2020 as part of Tanzfabrik’s OPEN SPACES festival, takes the sculptural work of Constantin Brâncuși as a jumping off point, and the movement vocabularies of pole dancing and ballet as its material.

Reading the programme notes for “Allongé”, I found myself wondering where on a Venn diagram pole dancing, ballet, and the sculptural work of Brâncuși would intersect. It turns out that the answer, neatly demonstrated by the diagram itself, might be one of geometry. As the audience splits into two halves to sit on opposite sides of the space, with Weber’s set design of vertical poles and angular objects standing in between us, the room extends upwards and outwards, already creating a space of sculptural multidimensionality. Weber, ballet dancer Shade Théret, pole dancer György Jellinek, musician Evelyn Saylor and light designer Annegret Schalke sit on the other two sides, in front of large printed murals.

Théret begins to cut diagonal lines across the space, executing combinations of classical ballet vocabulary, dressed in chunky jazz shoes, cargo shorts and a lime green leotard. Jellinek follows her pathway across the floor, wearing tight briefs in the same lime green, and dizzyingly high platform stilettos. As Théret’s legs develop into high extensions, Jellinek’s stretch languorously into a sideways split. She jumps as straight as a rod, and he climbs the pole. This drawing of parallels between the geometric dimensions of each style seems to be a recurring theme – at one point Théret turns fouetté pirouettes as Jellinek, upside down with legs wrapped around the pole, spins high above her. She drops to the floor, and he simultaneously drops down the pole. It is a moment which demonstrates what might be the limitations of directly mirroring the ways in which the two styles project the body into space.

Far more interesting, to my mind, is Weber’s choice of presenting pole dancing and ballet within the same frame. Both are historically highly gendered, falling on opposite sides of our collective cultural Madonna-whore complex. Similarly, considering their spiritual homes of opera house and strip club, they are pretty much polar opposites on the scale of ‘high/low art’. Yet the piece takes both styles out of these contexts and reduces them to their formal essence. Théret approaches ballet more like a martial art, executing each movement powerfully and stone-faced, stopping mid-manège to punch the air and shimmy. As Jellinek pole dances, it is mostly free from performative sexuality – he remains serene, controlled, almost clinical in his movement. However, when the sound cuts out after a particularly strenuous sequence so that we can hear Théret panting, I am reminded of the illusion of female ethereality which classical ballet tries to preserve. And seeing a male-presenting body in underwear and ten inch heels, spinning round a pole, still feels somehow subversive. Using technique as a raw material to carve out something new, while allowing its connotations to nonetheless continue ringing in the background, feels like a pleasingly sculptural approach to movement.

While the dancers’ bodies are examined as geometric objects, the objects on stage become bodies; the sharpened hourglass figures turn on their own axis, are cradled in someone’s arms, and roll or flip across the floor. At times, I feel the process of personification of object and objectification of person has the effect of neutralising both – meeting in a compromising middle, neither body nor object can be fully realised. A notable exception is when Weber himself briefly begins to dance – the curve of his back alone breathes as much life into form as any of Brâncuși’s sculptures. Evelyn Saylor’s music also shows the dynamic potential of form, chopping, transforming and reassembling sound, moulding various genres into a coherent whole. Her voice work is particularly effective; at one point, she sings a haunting melody, digitally looping each phrase until she is harmonising with herself, before the sound distorts into driving techno without undercutting the original impact of the human voice.

“Allongé” certainly feels ambitious and intelligent, and, not particularly familiar with Brâncuși’s work or approach, I presumably miss a number of references. (At several points, Théret and Jellinek each wear a second face on the back of their head – the best I can come up with is that it might be an inversion of one of Brâncuși’s most famous works, ‘The Kiss’?) Yet the formalistic abstraction leaves me with questions. Not least of all: in that middle space where sculpture and dance cross, crafts inspired by the physical immobility and mobility of their material respectively, what can really move us?