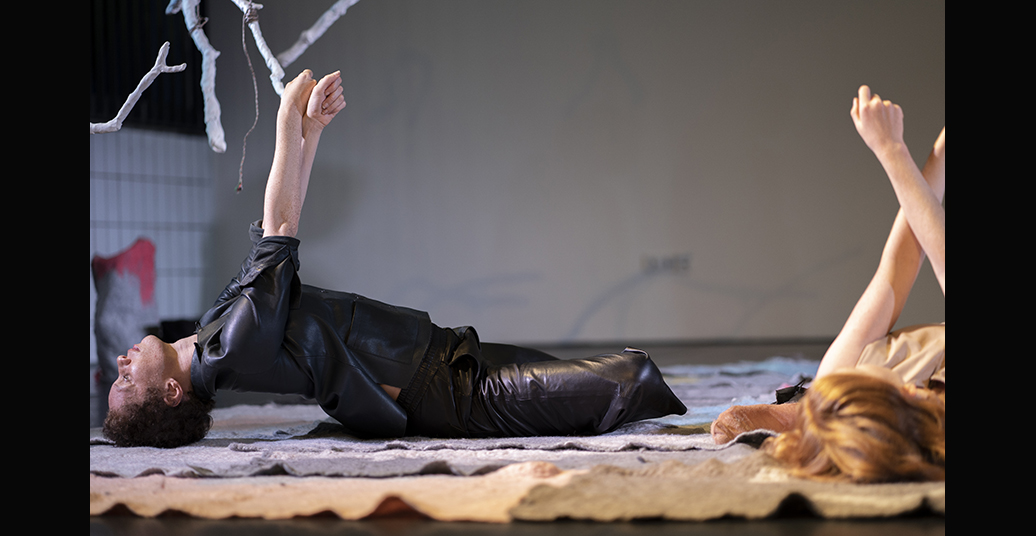 At first glance, Emmilou Rößling’s “The Fraternity”, performed during OPEN SPACES – How to get in Touch with… from 22 to 24 October 2020 at Tanzfabrik Berlin, seems like research on the topic of female togetherness. Beyond that, there is an emphasis on something more subtle, something which merges that which is felt with felt cloth.

Three dancers (Emmilou Rößling, Rachell Bo Clark, and Tarren Johnson) sit in a circle on the stage with their backs to the audience. They whisper to one another, sometimes quietly, sometimes loudly. They talk about everyday encounters and experiences. We observe them, only picking up on fragments in the process – like what you might overhear when listening in on three girlfriends. Without making a sound, they start to move slowly and carefully, muffled and almost floating, across the performance floor, which is partially covered by a felt patchwork blanket. While seated, they create various circular figures using their hands and feet. The result is kaleidoscopic images, which repeatedly flow into ‘tutting’ moves formed by their six forearms.[1] Like the dancers from Henri Matisse’s famous painting “La Danse” (1910), these dancers also appear similar despite their differences. A mobile made of white-painted branches and constructed with everyone’s help – sometimes by standing on the back of a dancer on all fours, at other times merely with support from one another – also floats. This supporting role of the group is especially evident during one moment when the three pour a glass together. The first pours a drink into a wine glass, which a second holds in her mouth. And only once the second bends backwards can the third drink from the glass. At the same time, they are independent and pursue their own agendas: they read their movements off tiny cheat sheets. Each performs her own choreography, though it is still a part of the whole. And not just because they are all performed on the same stage.

Nevertheless, this work conveys something more than this “togetherness”, which is why I want to talk about its effect on me. “The Fraternity” put me in a meditative state somewhere between reality and a dream. My perception of time slowed down, while my perception of space expanded. Emmilou Rößling’s piece brought me back to myself, and I left the performance with a notable calm, contentment, and lightness, which had little to do with the title “The Fraternity” and togetherness in a broader sense. The open ending – the dancers swap their clothing and sit together, once again whispering – hints at a timelessness (and cyclicality) of the three figures, one which also encompasses us, since we are floating with them. This work is an attempt to make the feeling of timelessness palpable – togetherness and participation take a backseat as thematic strands. Rößling’s “The Fraternity” plays with homonymy (‘felt’ like that which is sensed, but also felt cloth) and not with metaphors, which we normally employ to help us talk about feelings. We feel and float. We hold our breath as a dancer stacks seemingly unstable glass towers – and can watch her doing so forever. There is much more to this piece than first meets the eye.

[1] Tutting is a form of street dance.

“The Fraternity” by Emmilou Rößling is being shown once more tonight, 24 October 2020 at 8:30pm at Tanzfabrik Berlin Wedding, Uferstudio 1. The festival OPEN SPACES – How to get in Touch with… runs through 8 November 2020.