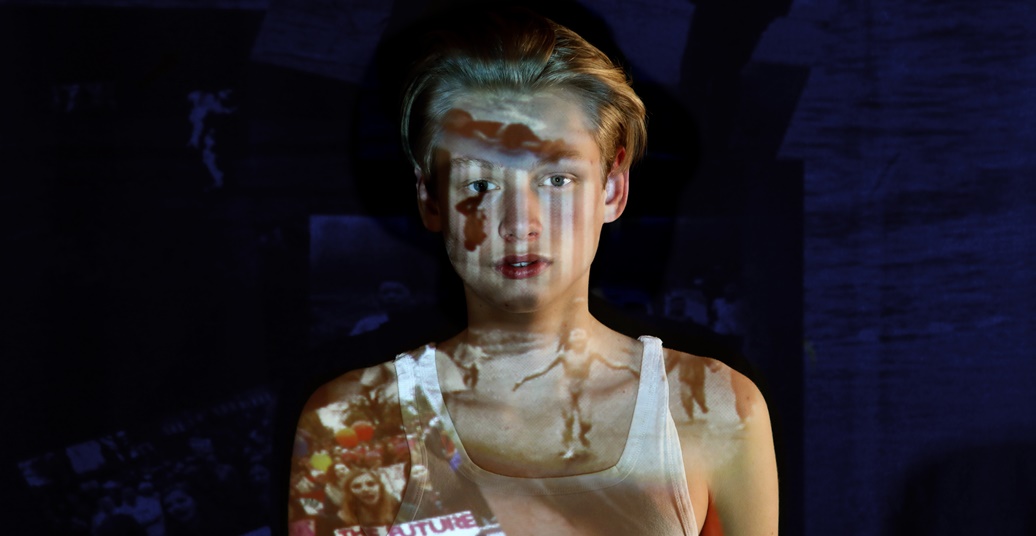 During this year’s anniversary edition of Tanz im August there was also space for young choreographers and emerging dance talents. With “Paradise Now (1968-2018)” young Belgian choreographer Michiel Vandevelde does an exemplary job of entrenching the vision of a new, politically ambitious dancer theater for a present day young audience.

They have long since become synonymous with today’s generation of 6 to 28-year olds: those photographic self-portraits, selfies in neo-German. Young choreographer Michiel Vandevelde seizes on the affinity for self-portrayal indicative of this age group, which spans three decades. In “Paradise Now (1968-2018), he undertook a near iconic ride, flooded with imagery, through the most important of events of world history since the student revolts of 1968. The age-old question of political significance and the function of the theater is revived from a future vision of present day dance theater with the aim of conceptualizing possible moral values for today’s youth while looking back at the anarchist student endeavors of the late 60s.

In 1968, two experimental theater performances in New York profoundly shaped the term “performance” in art and contributed to the contemporary, and often participatory, understanding of dance: the bacchanalian “Dionysus in 69” from Richard Schechner’s The Performance Group founded in 1967 and “Paradise Now” from Living Theatre, which sprung up twenty years earlier and was one of Antonin Artaud’s Theatre of Cruelty inspired anarchistic-pacifistic and spiritually tinged theater communes centered around married artistic couple Julian Beck und Judith Malina.

Berlin, 2018. Thirteen young people between fourteen and twenty-three fling themselves together in front of a curtain of glimmering strands constantly striking new poses and creating precise still images of epochal events between 1968 and 2017. As contemporary witnesses of a deeply troubled and confused world, they zap themselves in reverse chronological order through fifty years of documentary photography. Photographs from the 2017 Women’s March and Donald Trump’s 2016 election victory to Obama’s 2009 inauguration and the launch of the first iPhone in 2007 to the horrific wartime events and violent regimes in Syria in 2012, Srebrenica in 1995, Rwanda in 1994, Iran in 1979, and Cambodia in 1975 are re-staged. But, despite the frenzied topic shift, the young performers also expressively and vividly re-stage pertinent scenes from films like “Saturday Night Fever” form 1977 and “Titanic” from 1997. The final still image depicts the execution of a guerilla Viet Cong in 1968, who was murdered by the former Saigon Head of Police as if in passing. Switching between the roles of victim and perpetrator, the thirteen performers reference a photo by Eddie Adams that depicted a turning point in the Vietnam War and was also incorporated into the piece “Paradise Now”, the Living Theatre’s last collective performance. With this final still image, Vandelvelde’s piece is a successful reenactment of its historical original.

Nostalgia for the Collective

The thirteen performers from generation selfie, often viewed as uninvolved in reality, imbibe the originally four-hour, seemingly never-ending performance snippets with their readiness for absolute physical exertion. Back then, the latter was meant to prepare for the transformation of the world into an earthly paradise as a non-violent, collective-spiritual self-exaltation. An eternal feeling also ensues in Vandervelde’s accentuated version of the piece with The Who’s loop-like song “Love Reign O’er Me”. Arms around shoulders, the young dancers dance in a circle fitfully exhaling in sync and collectively getting in the mood for the ritual excesses, which can be surmised from a safe distance in the audience seats, and which audiences must have experienced in 1968 at the festival in Avignon and at other international venues. In Beck’s original, the audience sat around the scantily clad Living Theatre performers, who duly provoked them to participate.

Vandevelde, himself a former member of the fABULEUS company who studied at P.A.R.T.S in Brussels, keeps the staged debaucheries of his protégés in check. On the one hand, he probably does so for child protection purposes. But he also does it because he maintains a distance to the historical paragon by not breaking the fourth wall too often. The present day costume designs also attest to this.

What emerges during the one-and-a-half hour performance, despite the interjections of protesting bellows and the brief baring of genitalia by older performers, is the desire for more thoughtful collectivity – in the sense of a friendly, supportive solidarity as can be experienced in scenes of absolute physical exhaustion. Whereas Beck’s actors challenged the audience to a collective expansion of consciousness, Vandevelde’s young performers invite the audience on stage for sober reflection with a promising wink that no one will be touched. It is precisely here where another historical divide opens up between the former physically intense and politically ambitious theater and today’s conceptually shaped and often distal meta-level dance performances. The Living Theatre lived its ideals with flesh and blood. The philosophical musings of fABULEUS’ young performers on hope, despair, and the absence of resistance experiences seem strangely insipid and insincere. And so, the piece perpetuates the image of a contemporary youth only fleetingly interested in politics, while at the same time establishing a vision for a future, politically ambitious dance theater for young audiences. May the “going-through-the-motions” bear its fruit!