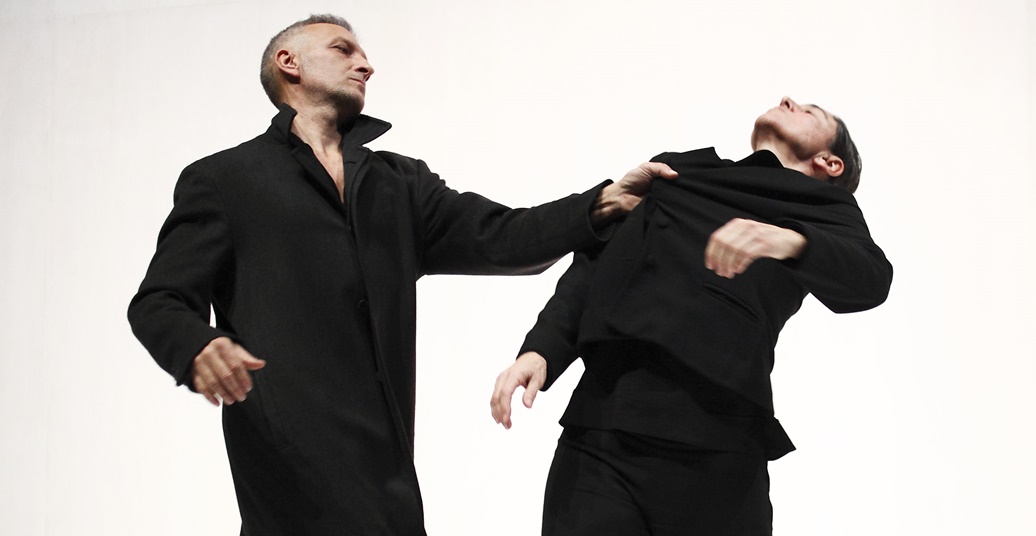 Within the framework of Tanz im August, French choreographer Noé Soulier attempts to explore the relationship between movement and thought with “The Waves” while Spanish choreographer duo Mal Pelo creates simultaneously delicate and powerful body poetry with “The Fifth Winter”.

“What does a gesture imply? How does the meaning of a movement unfold?”, asks French choreographer and philosopher Noé Soulier according to the the program for “The Waves”. He strives to reduce individual elements of movement to their essence and explore the connection between movement and thought. However, it has been a long time since I experienced such a disparity between program text and personal perception.

I see a lot of dance this evening: powerful jumps, legs thrust into the air like a handstand, constant turning on demi-pointe, stretched legs, dynamic flinging of body parts, rapid spinning throughout the space, expressive faces. The dancers, all with excellent contemporary technique, sometimes look like they don’t know what is happening to them. The piece is interspersed with individual dancer monologues whose content I do not remember and during which the dancers use their hands to pull on various body parts and on their skin, or draw invisible lines on their arms and legs. Flaunting themselves, selling their bodies?

The music, live drumming by two percussionists, is permeated with abrupt stops, rhythm changes, and breaks. The interaction between movement and music fails to reveal itself to me (which is not inherently bad), and the result is an undecipherable rhythm that lasts the duration of the piece, making the viewers uncomfortable until the bitter end. Whenever I feel a crescendo, like a certain quality could unfold, one in which movement, light, and sound unite or even contrast, there is another break, it gets dark/still/motionless – at which point, once again, the next monologue / the next group dance scene immediately commences. The evening feels like an arbitrary stringing together of dance and monologue scenes with indistinct dramaturgy and endless repetitions.

It is interesting to observe the starkly different dancers with each of their personal movement languages. However, I can not shake the impression that a very intelligent person thought up something very intelligent but was unfortunately unable to transport it to the auditorium. What is happening on the stage remains inaccessible and cerebral until the very end. I leave the hall after 60 long minutes along with other baffled looking faces.

Similarly physical and very dance-centric (and of course by no means contemporary dance), but yet completely different, is the work of Spanish choreographer duo Mal Pelo, made up of Maria Muñoz and Pep Ramis. While “The Waves” presents a disjointed juxtaposition of contemporary dance technique and philosophical concept, “The Fifth Winter” by Mal Pelo is what the title already hints at: a choreographic poem.

Two people wait for winter to be over. They wander across the bare stage (a white cube) in heavy black coats surrounded by the voices of their memories, which are uttered from offstage from time to time: but if we go, then where to? We must acclimate to the dessert.

The spoken text fragments are from the work of Italian poet Erri de Luca, and they form the perfect frame for Muños and Ramis’ delicate and simultaneously strong movement poetry. Admittedly, I was initially surprised by the movement language of both dancer-choreographers, which at first glance did not appear particularly progressive. Gentle swaying in time with their breathing, a pushing and shoving of bodies, flowing movement qualities, strongly expressive faces, and everything always somehow conceived from the body center. I think to myself, this is probably what contemporary dance classes in the 1980s were like, at the time of Tanzfabrik’s beginnings in West Berlin. Which is hardly a surprise, since Mal Pelo was founded nearly 40 years ago – Maria Muñoz and Pep Ramis have been choreographing together since 1989.

And yet the gentle poetry within the precisely created movement, the strong presence (I am very much in this moment), and the genuine bearing of the dancers reveal years of experience and profound body knowledge. Even when it all screams of dance theater, when props (standing lamps!) are carried back and forth, suddenly someone is doing push-ups, jackets are torn off bodies, and faces are contorted, I accept it all from them. And so the poem fades away, the stage empties, two people limply raise their arms, leave the space, a hanging lamp makes it last rotations in the air until the light goes out. One night. Sand, so, so much sand. The sky on my head, the sky beating against my head. […] Thousands of stars […] I am like a lost star in the sky, I want to line up with myself, but I can’t do it, can’t do it.