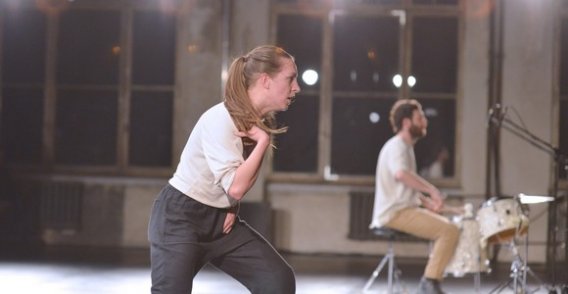 In correspondence with Lina Gómez

An artist profile on Lina Gómez and her work “Restraint”, which resounds with power, energy, and detail at Tanznacht Berlin.

Night three of Tanznacht. Uferstudios. Studio 1. People gather on the the stairs which form our seats and lead to the dropped stage in the centre of the room, where a drum kit is set up, a little to the left. We all squish together, some happy about this, others less chuffed, feet, knees, and backpacks everywhere. One drummer and one dancer enter the stage and, for thirty minutes, play with and against each other in noise, power, and action. The movement is one of stomping, shaking, trembling, sliding. But it is not freefall, nor frenzy, nor chaos. Rather, “Restraint” is a work of extreme precision.

The work is a powerful component of this year’s Tanznacht. First shown at ada Studio, and subsequently at the Sophiensaele’s Tanztage 2018, “Restraint” is a work as full of energy and endurance as it is of detail and nuance, fastening together often performatively disparate components of dance practice into one pulsing whole.

Indeed, wholeness is an important concept in Gómez’s work and creative practice. The usual working process, for instance, is one of togetherness. “I always like to start with everybody together,” Gómez tells me. “I like to bring different languages together, and it is with the dialogue between them that I would like to deal. Therefore I needed, in this case, dance and music together, affecting each other, inspiring each other, from the beginning.” Gómez says that while she had a clear vision of the type of movement quality she wanted for “Restraint,” the collaboration still remained “a constant negotiation.” Working on her own body, the material Gómez generates does not always transfer easily to others. Therefore, in the end, the work is a “co-choreography,” Gómez says, though one in which “every little details is written.”

Drummer Michaelangelo Contini was also an integral part of the artistic collaboration. “He was not just responsible for the music,” Gómez explains, “but was researching and developing material prior to and during the creative process.” In “Restraint” she cites motifs such as restarting after a pause with the “same” energy before the pause – an important contribution from Contini. Having conceived of it as a solo, it was on the second day of rehearsals that Gómez realized it was a duet, and, two days before the premiere, when she realized that the impact of light from Pocheron made it, in another sense, a trio.

I ask Gómez about the type of virtuosity that “Restraint” contains, a virtuosity full of stamina, detail, and technique. “I am fascinated by the things you mention, too, and I take them as continuous questions in my work,” Gómez says, “I was a sport girl when I was a child… it’s this environment where virtuosity, stamina, details, and technique are just part of the body, without thinking so much about it. There’s a specific quality, a grounded quality, a readiness, that fascinates and challenges me.”

Some forms of contemporary art practice shy away from such things that might control or limit, but limitations function as an interesting way for Gómez to shape her material. In particular, she cites repetition and the work of Brasilian poet Manoel de Barros: “Repeat, repeat until it becomes different…” she quotes in translation, adding “this phrase is always resonating in my life.”

Like many pieces of engaged performance work, Gómez tells me that despite its details, each time the performance is a surprise, effected by the energy and mood from the performers and audience unique to each day. But more intentionally, certain facets have changed over time, such as playing with the sounds that Julek’s body produces. Sounds, which started out as ways for Julek to reconnect her body with energy and attention, came to form another layer in itself, giving additional depth to the work, and increasing it’s complexity, Gómez explains.

For drummer Contini, while the work may thicken, its repeated performance also allows him to engage in other aspects of the work. “The more I perform ‘Restraint’,” he writes, “the less I am worried about the technical skills that the performance requires. That allows me to concentrate on the dialogue, the contrast, and the communication with Julek’s dance. I would like to perform it 10 days in a row.”

While the capacity of Tanznacht does not allow for 10 performances in a row, the performers agree it was a special experience. Tanznacht brings in a public audience, but it is perhaps first and foremost a hub for Berlin professionals to watch one another’s work, and Gómez cites the opportunity to share it in front of colleagues they admire as particularly valuable. “It is also important”, Gómez explains, that “it is possible to show a work in Berlin more than eight times and still have an audience that wants to go and see it. It was really nice having people in the audience that were seeing ‘Restraint’ for the second, third, and even fourth time! That is something really special for us.”