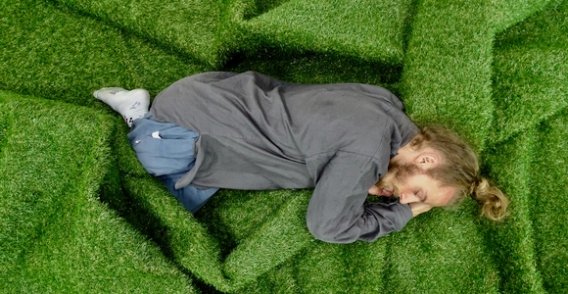 Luxembourgish choreographer Jill Crovisier delves into the images, impulses, and connections of our imaginative mind in her work ”The Hidden Garden.”

This summer, on the grounds of Uferstudios, much has been stirring due to the presence of Jill Crovisier: movement research, daily profit classes (described by one participant as ”a party every morning”), and the rehearsal and presentation of her 2016 work ”The Hidden Garden.” Crovisier, who is resident in Berlin for six weeks, supported by Luxembourg’s Fonds Culturel National-FOCUNA Scholarship, and has danced internationally for more than ten years, is now focused on developing and refining her own unique movement language, which has previously produced works including ”MATKA” (2016) and ”SIEBEN” (2018), as well as ”Zement, the solo” (2017), which was shown as part of the Lucky Trimmer series.

While still engaged in ”developing her specific signature” Crovisier’s work is already impressively distinct. In ”The Hidden Garden,” Crovisier focuses on the question of what happens to our accessing of our imaginative minds as we grow up as a starting point for her work. Introducing us to a sharply lit square patch of grass, our own little garden marked very clearly as both an abstract and real space which allows our minds to enter, from the beginning, a type of virtuality. We are introduced to a strange creature who shuffles across the stage with a bouquet of flowers for a head, before revealing his face and natural human form. Such a surreal start demands already that we fuse real and unreal images as our first point of order, moving our attention to the ”regular” form of the human body and its movements not as a given, but as something that comes subsequently. As such, Crovisier opens our minds from the outset into what things could be, look like, and do.

Through a series of vignettes delineated by short blackouts, we peer into this secret garden in which the figure, embodied to full capacity by the able Sami Similä, shifts through moods, impulses, and games, sometimes with oneself, at other times with invisible opponents. Similä’s highly athletic but totally clear movement lets us run with him through more direct intentions like sorting, giving, and fighting to magical manifestations like the pawing centaur he becomes, whirling and bellowing to absurd but totally alluring affect. At other moments, though, we also glimpse images which feel immediately relatable: ourselves in front of a mirror, listening to music that’s too cool for us, or the rapture we feel when we hear soaring song. Similä embodies this instances as we do sometimes in our bedrooms and living rooms, and as we would in our own secret garden. Seeing him do so so unabashedly, and so beautifully, makes us question the constraints we put on our everyday vocabulary of action.

The end of the piece sees Similä submerge himself under the thick grass carpet, beginning slowly, but eventually twisting his way to find new patterns and forms for the materiality. Despite being foreshadowed by a few brief but dark vignettes which bore similar lighting and sound (and which now make more sense), this big shift in mood and concept still feels a little jarring. The disruption of the secret garden, which has made so much possible both for the figure and for our own minds, is challenging. Nonetheless, the evolving landscape is captivating to watch. As Similä emerges to find a place of rest between the newly created mountains of the earth, there’s a sleepy sense that perhaps it was all a dream. I hope not.