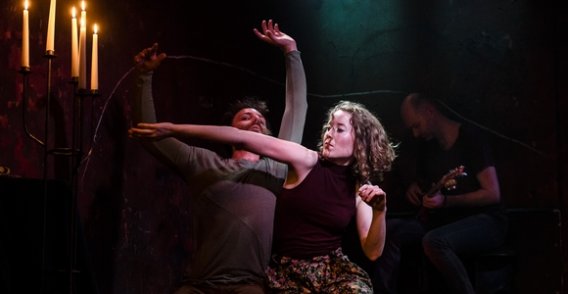 Squeezed in eccentrically behind the Anne Frank Zentrum, an ice cream shop, a comic bookstore, and a few other bars in Mitte’s Hackesche Höfe lies Escheschloraque. Known to many a local and tourist alike (if fewer a dance critic), Escheschloraque is a bar in the most typical sense of the word: hard acoustic, uneven wooden floor, red lighting, and a loudly friendly but watchful front doorman. They are expecting me on the guest list, and welcome me with a stamp and a wifi password, and as I wait outside on the picnic tables surrounded by American tourists betting on what the night’s show will be like, a young woman approaches me and asks me if there is anything I need to know.

Her name is Caroline Gerbeckx, and, in 2011, it was her who began the Escheschloraque performance evenings, wishing to fill Berlin’s ”slow night” with a little more fun. A contemporary dancer as well as a bartender, Gerbeckx felt that ”Berlin needed more stage” and began inviting artists she knew, as well as patrons of Escheschloraque, many of whom are dancers, actors, performers, and musicians themselves, to fill their weekly Tuesday slot. Now in its seventh year, Gerbeckx tells me that she and the bar still run the Tuesday evenings but, unfunded, are run on passion and a lively community who now reaches out to them; a small door fee is given to the performers at the end. Shows come in all sorts, and while artists are previewed by Gerbeckx, they are allowed to show something new and experimental, untethered from what they might have done before or what they might have shown elsewhere. ”We have very few rules,” Gerbeckx tells me, but all pieces must be at least 30 and no more than 40 minutes long. ”It’s still a bar,” she explains.

This evening’s performance is a new offering ”Arising/Passing: a moving soundscape” from dancer Victoria McConnell and musician Joshua Tennent, who have previously worked in collaboration, and who are joined by artist Alexander Windner Lieberman. Pre-show the artists are chatting and fraternizing with patrons; it’s gritty and smokey with a mould-green floor and copper-coloured walls, and feels like I am time-travelling to the Berlin that made Berlin famous. And, as such, McConnell and Lieberman’s first offering is especially apt: entering the stage, they take several minutes to slowly light a six-stick candelabra, then they sit together, then McConnell traces an outline of the space in chalk along the walls, down the stairs, into the floorspace of the bar, defining a little pool of stage space while Lieberman parfumes the room with incense. Through this process, the room transforms, the audience quiets, the performers become focused. By the time this ritual is complete, we are ready for the performance that begins.

Built on the theme of emergence and exchange—notes, melodies, partnerships, roles—McConnell and Lieberman take turns moving to the music. The two take turns moving and being still. While one twists, turns, and plays with the motif of tracing, the second dancer watches, sits quietly, or occasionally reads lines from tiny copy of the Dhammapada, a book of the Buddha’s sayings, a somewhat overly esoteric and disappointing choice for a piece already styled with many alternative trappings. As Tennent’s tones rise and fall, the speaking dancer toggles with a loop machine, occasionally awkwardly, but more often to a beautifully layered effect.

The dancing on a stage only a few metres wide is impressive. Lieberman’s moves are occasionally clunky though he does do some interesting work with the stairs which appear to be sucking him in, downward, upward, and across. McConnell, technically strong and agile, performs vividly and does a particularly able job of interacting with her unusual architectural surrounds, moving her body against the wall and floor, into crooks, and into planks against the wall so convincing that we can really imagine her walking on it. More so, she takes care of the space, responding intently to musical shape and carrying the partnering, making sense out of the three improvising energies each performer offers.

It’s not always clear how the musician, who seems gripped in solo playing, is responding to the dancers, but there are moments of collision which are notable, such as sonic vibrations and moving ribs, or a softening sound with softening bodies—not perhaps revolutionary, but not everything needs to be. It’s nice to see dance outside ”the scene” with a boisterous crowd of people who continues to buy drinks and whisper loudly. After all, it’s 10 p.m. on a Tuesday night. I am happy to have found this little spot to come without expectations, and to have been pleasantly surprised.