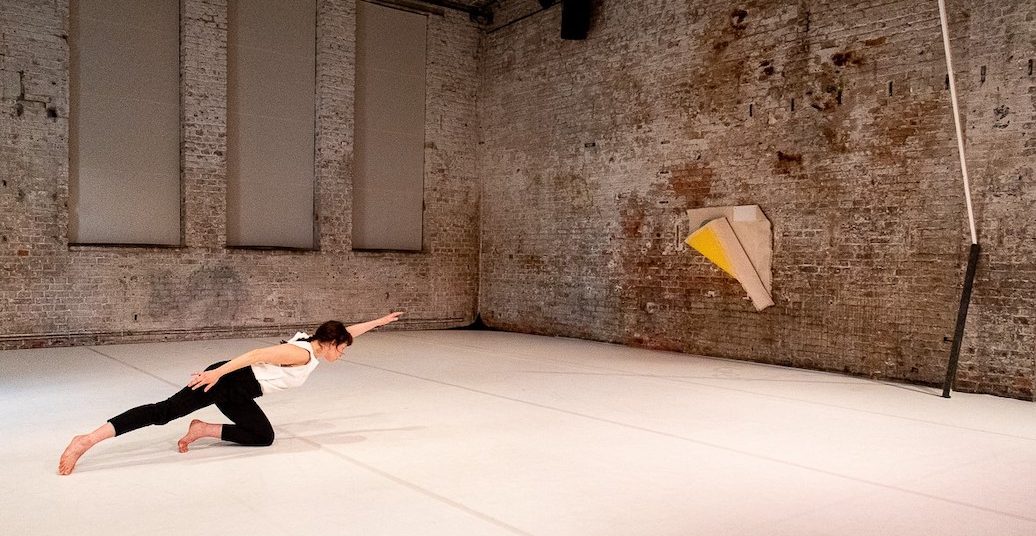 “New Rear” by Mor Demer premiered on 30th September at DOCK 11 after many cancellations during 2021 due to the pandemic. Demer, an artist in residence at DOCK ART, creates a sensuous movement and aesthetic landscape that offers space to contemplate.

When we enter the DOCK 11 Theatre space, Demer is already moving across the floor in silence, elegantly dressed in a stylish geometrically-patterned white t-shirt and black pants. She is at the back of the stage in the right-hand corner. The stage set consists of a white dance floor and a white square of light on the stage. I slowly notice some other scenic elements, such as wooden sticks and a canvas curled up on the wall.

The first movement section consists of slow and measured movements low to the ground, travelling from the back to the front of the stage. I have the feeling that Demer is paying attention to every millimetre and every cell of her body. Small hand gestures accompany the movements of her body as she lowers herself to the floor. When she has reached the proscenium, she positions herself on one knee, lifting and straightening the other leg behind her and balancing it with the opposite arm. In this contralateral position, she rotates on the supporting knee. This movement is physically challenging because it requires balance and it somehow contrasts with the previous harmonious movement sequence on the ground. There is still no music, but the sound of her breath is becoming louder.

Afterwards, she stands up and takes a black tambourine that is hanging on the left-hand wall and starts playing it. She accompanies the hitting of the tambourine with notes sung in a deep voice, as she looks along the diagonal. She starts to speak, like a prayer about what could be considered as ‘new’.  She pronounces sentences such as: “New smells plastic. New is always constructed by how. I invent my prayer: I am a rockstar. We inspire we expire.”  When the prayer finishes, she unveils six or seven, light grey, medium-sized, soft plastic balls from within the curled canvas on the wall. A ‘slippery dance’ then starts, where Demer rolls on the balls and plays with them. Then, she starts a dance that recalls the poses of statues. She seems to be measuring the space with her body and the repetition of these poses. She follows a movement sequence by tracing spirals on the ground and walks backwards while she reads out another prayer. The lights turn suddenly red-orange, and Demer represents poses that appear to have some influence from Balinese dance. The music suddenly ends, and the light shuts off. The audience takes a few moments in silence before warm applause.

I found the precise spatial placing and the various sections of Demer’s work well balanced and rigorously organised. Each movement and aesthetic detail was clearly and deliberately conceived —for instance, her clothes recalled some scenic elements — as in a ritual where every action is perfectly placed in time and space. To me the most compelling element of the work was how Demer let a prayer emerge from the dance. She constructed a ceremony where each movement was deeply linked to the words pronounced.

The performance is accompanied by a booklet composed by Mor Demer herself. Demer is now developing her project “To Mend”, ‘a topological field research in public space’ (Demer 2021). You can find more info on her work on mordemer.com and on the website of DOCK 11.

The premiere of “New Rear” would have taken place several times during 2020 – 2021 and had to be postponed due to the pandemic. The work premiered privately in May 2020.