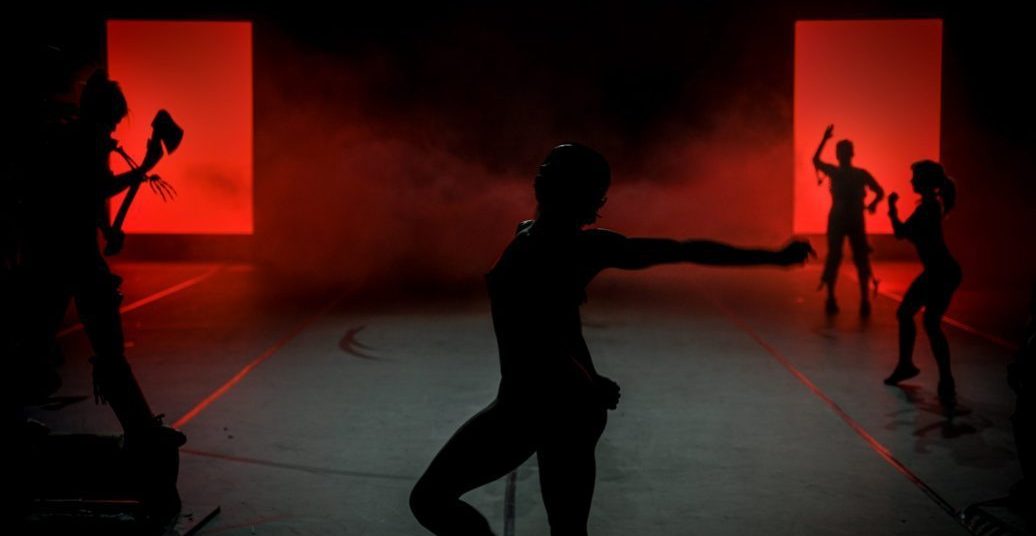 In “A Divine Comedy” by Florentina Holzinger, which premiered at the Ruhrtrienniale in August and which opens the Volksbühne dance season, Totentanz, orgasms, techno, an obstacle course, bodypainting, the dissection of a rat, a body set on fire, humour, a flying piano, and much more cohabit in a powerful theatrical piece.

Dante Alighieri’s Divine Comedy begins with its main character lost deep in the forest — a moment that could be interpreted psychologically as a loss of direction in life. Holzinger’s piece, meanwhile, starts with collective hypnotherapy. With this beginning, Holzinger situates the narrative into the present day. A few moments later, I learn that the character of Dante Alighieri himself has been embodied by a woman (Annina Machaz) named ‘Dante’ as part of an all-female naked trans-generational cast. She is dressed only in a red Renaissance cape over her shoulders and with a wreath of laurel leaves on her head, as well as a pair of sneakers.

I will attempt now to give you a taste of the show, even though its complex structure and the richness of its details mean that any description would be incomplete. Holzinger places Hell, Purgatory, and Heaven onto the same set: on either side of the audience seating, there is a screen flashing up phrases like ‘dark and deep’, and the signs ‘Hell’, ‘Purgatory’, and ‘Paradise’ also make an appearance at the appropriate point in the narrative. On the left-hand side, there is a DJ, naked and with a fake skeleton riding on her back. Meanwhile, on the right-hand side, a performer is pretending to dissect a rat. The images of the dissection are intermittently projected up onto the screens. Two staircases are visible at the back of the stage, and two cars hang from the ceiling.

In ‘Hell’, Dante’s lover Beatrice is introduced, played by the appropriately named Beatrice Cordua, a former Hamburg Ballet ballerina, now in her 80s and in a motorised wheelchair. An obstacle course follows, and then a techno dance, a biker, a Totentanz performed by naked performers with fake skeletons on their backs, and even two stunt women who throw themselves down the stairs. ‘Purgatory’ develops in an orgiastic painting performed by the full ensemble in reference to 1960s action-body painting, followed by performers pooping onto a painter’s palette. We leave ‘Purgatory’ quickly behind and ascend to ‘Heaven’ which is defined by the side screens displaying clouds, a joyous masturbation scene, and sexual intercourse between Dante and Beatrice in her grave. Finally, a grand piano is brought on stage and is hauled up to the ceiling, player included, while it is still being played — like an ascent to Heaven. Meanwhile, one of the cars crashes onto Beatrice’s grave.

“A Divine Comedy” is in line with Holzinger’s previous works (such as “Tanz. Eine sylphidische Träumerei in Stunts”, 2019) in that it re-enacts classics alongside a movement language informed by martial arts, stunts, sport, and clubbing, and is performed by an entirely naked women cast.

Upon leaving the theatre, my overwhelming feeling was one of having had a huge amount of fun watching the piece and I felt energised by it. I was intrigued by the theatrical skill needed to construct a two-hour long piece informed by cinematic strategies (sometimes referencing splatter and horror movies). Three aspects of the work especially caught my attention: the reinterpretation of the concepts of salvation, the role of the women, and the re-establishing the significance of the comedy for a larger audience.

Firstly, I was struck by the fact that Holzinger’s work doesn’t appear to search for any eternal salvation or redemption, in spite of the message in Dante’s “Divine Comedy”. Instead, it looks for the material and emotional pleasure of having a body and everything that goes with that.

Secondly, Alighieri’s work clearly defines the role of women as instrumental in guiding Dante towards the redemption. Even though the women in the original work are few, they are indispensable if Dante is to complete his journey up to Heaven. In the original, Beatrice only shows up in Heaven, but in Holzinger’s Beatrice is present from the beginning in Hell — as though Hell and Heaven are merged in her person. As previously mentioned, by choosing a cast entirely formed by women, Holzinger makes a clear statement about gender roles, even though she herself has affirmed in interviews that she is not directly focused on gender issues (Holzinger 2018a). Despite this assertion, I believe Holzinger’s work encourages the presence of powerful women’s bodies on stage by offering a radicality in the actions that she requests them to perform.

Finally, in Italian culture, Dante Alighieri is considered our most esteemed poet (this year commemorates the 700th anniversary of his death) who, through the Divine Comedy in the 14th century, helped give birth to the modern Italian language. When Dante decided to write this work in the Tuscan dialect of Italian instead of the expected Latin, he made the Divine Comedy comprehensible to the wider population, not just the upper, educated classes. And by elevating the Tuscan dialect above other varieties of Italian, he initiated the process for the creation of a united Italian language. The work was originally entitled simply as the Commedia and it saw much popular acclaim. The ‘divine’ was only added much later by the poet Boccaccio. Holzinger’s work somehow returns to the intention of Alighieri’s initial title — not only because Dante is shown here as a caricature (with all his physiological necessities unambiguously expressed) rather than as a respected poet, but also thanks to its union of the classic (such as the figure of the ballerina) and the popular (such as techno and stunt) which expresses the comedy in its most important essence as an artform that speaks to a wider public.