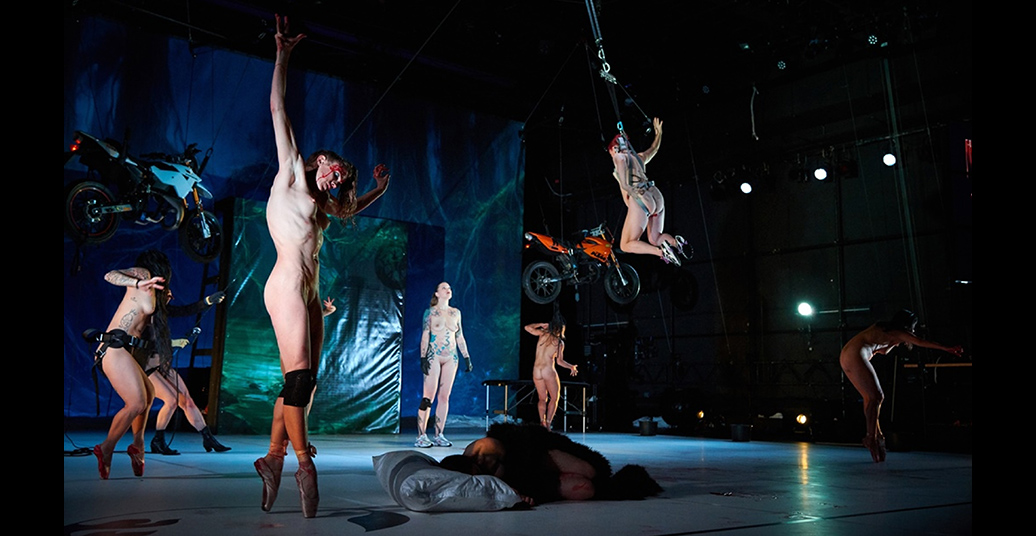 During the rise of ballet at the beginning of the 19th century, romantic ballets were divided into two parts: a realistic one followed by a fantastic one — so Florentina Holzinger informs us during the intermezzo of the all-woman performance “TANZ” at Sophiensæle.

We’re only halfway through the performance, and already, an impressive amount of imagery has flooded over us. During the first part, we found ourselves in a ballet studio in which 79-year-old Beatrice Cordua (the first ever to dance “Les Sylphides” naked) taught the other seven performers how to “govern their body”. Although she was without clothes, revealing a body ingrained by time and encircled by an awkward sound-device belt, authority seeped out of her with every encouraging word and every gentle movement she made. This fierce lady embodied knowledge, experience, and expertise, and every instruction was received with the greatest respect. So, yes, it made total sense that the dancers undressed when she told them to, followed advice on how to masturbate best with complete seriousness, and stood on all fours, their buttocks facing the audience, while their vaginas were inspected. Live close-ups of vaginas appeared on two screens at either side of the stage, and this abundance of vaginas was an exhilarating freedom. YES, WE HAVE VAGINAS! YES, WE USE THEM! Every now and then, one of the performers took a pee into one of the buckets around the stage.

Lesson Two: How to be Light. While Renée Copraij was taught how to dance “Swan Lake”, in which gravity is of no relevance, high above the stage, Laura Stokes and Veronica Thompson began a trapeze act, in which they hung head to head, connected through a ring in their buns. I could hardly watch as Thompson spun, suspended only from her hair, but it was only a harbinger of what was yet to come.

Within all this constructed fakery, the skin of performer Lydia Darling’s back is pierced with hooks, live on stage. This time, the red fluid is actually blood. One of the wicked witches hoists her up by a rope attached to the hooks. She hangs by her skin. There is a moment of adjustment and overcoming, and a moment of intense silence in the audience, before she becomes a wicked witch herself, and dances the dance of death. With a broom in her hand, she moves forcefully through the air, groaning. Her stretching skin is a sign of supernatural powers.

After two-and-a-half hours, I emerge from this well constructed overload of eclectic imagery, diverse disciplines, spectacular stunts, and cultural references. Although every now and then, I needed to retreat from the overwhelming magnitude of it all, I’m mostly left with a great sense of admiration. The exciting bravery, the uncompromising dedication to the work, the ode to womanhood, and the power of imagination will stick with me for a long time.

“TANZ. Eine sylphidische Träumerei in Stunts” by Florentina Holzinger will be shown again in Berlin in the frame of Theatertreffen 2020.