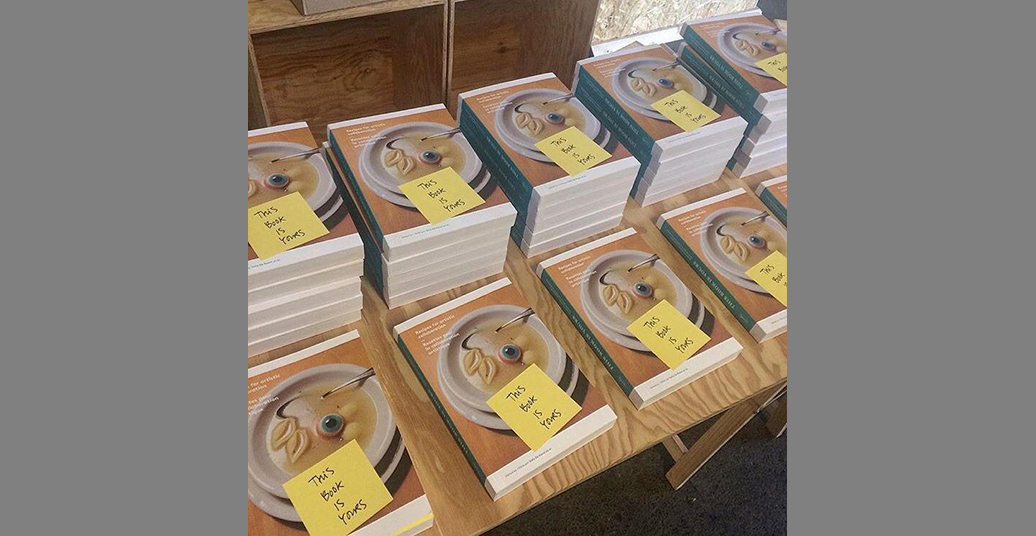 On 21 March 2020, Sally De Kunst was scheduled to present the book “This Book is Yours – Recipes for Artistic Collaboration” at the Berlin office of Vexer Publishing House with a cooking workshop. Like many things in Berlin and worldwide, this event – a collaboration with Tanzbüro Berlin – could not take place. So I invited Sally De Kunst to respond over Skype to a few questions about this unusual recipe book on cooking and artistic collaborations. I found it particularly relevant at this current point in time as we’re spending a lot of time at home – probably also cooking – and gaining a greater awareness during this period of isolation for how very much our way of life depends on collaborations.

“This Book is Yours – Recipes for Artistic Collaboration” is a manual for artistic collaborations and spans the period of a four year Arc artist residency in Romainmôtier, in French-speaking Switzerland. Housed in a former pilgrim hostel located in a cloister listed in the Swiss Cultural Heritage Registry, the artist residency was an institution of Migros Cultural Percentage and active between 1997 and 2018. The book is neither a retrospective nor a documentation of the artist residency activities. It is rather a tool and an inspiration for rethinking one’s own practice.

Sally De Kunst directed, reconceptualized, and innovatively shaped the residency from September 2014 to December 2018. She previously served as the head of the contemporary art festival Belluard Bollwerk International in Fribourg, Switzerland, among other things.

In the introduction, you briefly explain how the book came about. Could you tell us when you realized that it would take this form (recipes for cooking and collaboration)? In short: what came first, the recipes or the concept?

Sally De Kunst: It was originally meant to be a book compiling experiences at Arc. We wanted to create another kind of art book. We wanted to share our knowledge of handling collaborations involving more than 300 people that we had acquired over the years – along with our personal and artistic experiences at Arc. We worked on various topics at Arc and experimented with a lot of tools and strategies. And we absolutely wanted to pass this insight along. The book took on even more importance when we learned that the residency would end in December 2018. The book is a trail that tracks what happened there.

We found the kitchen as a democratic meeting place especially powerful. We cooked and ate there together, we had discussions there and informal exchanges. We chose the cookbook format: as a reader, you can choose which recipes you’re interested in, you can make the book your own. Like every cookbook, where changes are listed in the text because the cake was too sweet for our taste, where another recipe on a loose sheet is tucked inside, or tomato sauce splattered the page while cooking, a serial book should be an individual object that you can turn to again and again.

How are your own professional experiences and methods reflected in the book? For example, your direction of the Arc Residency in Romainmôtier? What could a residency format and this method of working mean for artists?

When I arrived in Romainmôtier to direct the Arc Residency, I was looking for the right format for an artist’s residency and for an answer to the question “What is an art institution in Switzerland in 2014?”. I collected the opinions of a number of artists to better understand how a residency could optimally support them. Every year, we questioned what worked and what didn’t. And based on that we continued building, experimenting, and researching. The most important thing for the artists was having a place where they could research and exchange – where they weren’t entirely independent and isolated – but also not under stress to produce something. So a space to research, exchange ideas with experts, and where there was no demand for results. We played around with a lot of different ideas and formats, and we’re now happy to share this culinary and artistic knowledge.

The book is also a collaboration: were you able to use the ideas and methods described in the book? Are in studio collaborations different from those on paper?

For starters, we see the book as a metalevel for collaborative research. But it is also simultaneously a collaboration. The five people I invited to edit it all worked on different projects together at Arc. And they come from a broad palette of disciplines: anthropology, art, bacteria and plant research, drawing, curation, choreography, and philosophy. All six of us sat together for a number of days over the course of several weeks. We mapped out the chronology of Arc on the office floor: the projects, the public events, the topics, the knowledge, and also what recipes we cooked at the time. Around 40 other people wrote excerpts. And that’s how the book slowly materialized. Our mutual experiences with the Arc vocabulary, tools, and projects was really helpful.

How did the topics come about? And were they immediately associated with a recipe? What makes a pea soup particularly suited to informal sharing?

The topics came from an overview of everything that was done and researched during a residency. The dramaturgy of the book arose at the moment of retrospection. The recipes are the same ones that were also cooked at specific events. For example: during informal sharing, which we also invited locals from the region to attend, we always cooked soup. We had the idea for the nettle soup in the chapter ‘Commoning’ because we also cooked it while planting the ‘Keyhole Garden’ (permaculture garden) together. I always personally picked up the artists from the train station and prepared simple recipes like pasta alla norma on the first night. Everyone talked while cooking and drinking an aperitif.

What’s your favorite recipe and which essay do you find particularly important?

I don’t have a favorite recipe, essay, or topic. I think they all belong to the dramaturgy of the book. One essay that perhaps sums it all up is the one about fermentation, metaphorically speaking, in chapter 1. And it is inspired by the very first residency when I invited seven artists to reconceptualize the residency together.

And what topic fits particularly well to dance or choreographic thought processes?

In general, all the topics are important and could help with dance and choreographic thought processes. However, in chapters 9 and 15 under “Re-position your practice”, there are particularly practical tools like feedback, exchange in groups, and general cooperation that can be immediately applied. I imagine that could be very helpful.

Two titles in particular piqued my curiosity: “A Guest + A Host = A Ghost” and “Pizza Portrait”. Can you say more about them?

The first text is about the key concept of the artist’s residency: ‘Hospitality’. The title is a play on words by Marcel Duchamp for his guests at a Parisian exhibition in 1953. The etymology of the words ‘guest’ and ‘host’ is the same, and this makes for an interesting ambivalence. Our guests also become hosts when they themselves have guests or because we hosts sometimes become guests. That play on words encompasses this duality, and the ‘ghost’ is the interaction you have. However, I should also add that we had a ‘ghost in residence’, Marguérite, in the Arc building (though we never saw her).

“Pizza Portrait” is a recipe by Giacomo Cardoni. But there is also a second pizza recipe in the book by Lavinia Raccanello. Because it was interesting to see how the artists approached the same dish. Giacomo held a kind of pizza workshop, and Lavinia was most concerned about the preparation of the dough. We see both recipes as a metaphor for different artistic approaches.

The title of the book “This Book is Yours” strives to be a call to action. During this strange period of pandemic, what do you think we could learn from this book?

That’s not an easy question to answer, but I can imagine that good nutrition can help – and there are some delicious meal recipes in the book, but also nutrition for the soul. We had a format called ‘Walk and Talk’. It consisted of walking in pairs and discussing something. New ideas emerge when walking, and the discursive exchange is distinct. So long walks alone or in pairs with a good conversationalist – at a distance – could be helpful now.

The book is linguistically very rich. It is a journey between numerous languages, mostly English and French? Is there a translation in English? Why these two languages? German, the primary language in Switzerland, is not included.

All the texts and recipes are translated into French and English. In the first part, the texts are in the original language. The second part includes translations. French is of course the language of the region, and English was included since our guests came from all corners of Switzerland, but also from other countries, and English simply became the common language.

To get a peek at the book: thisbookisyours.com