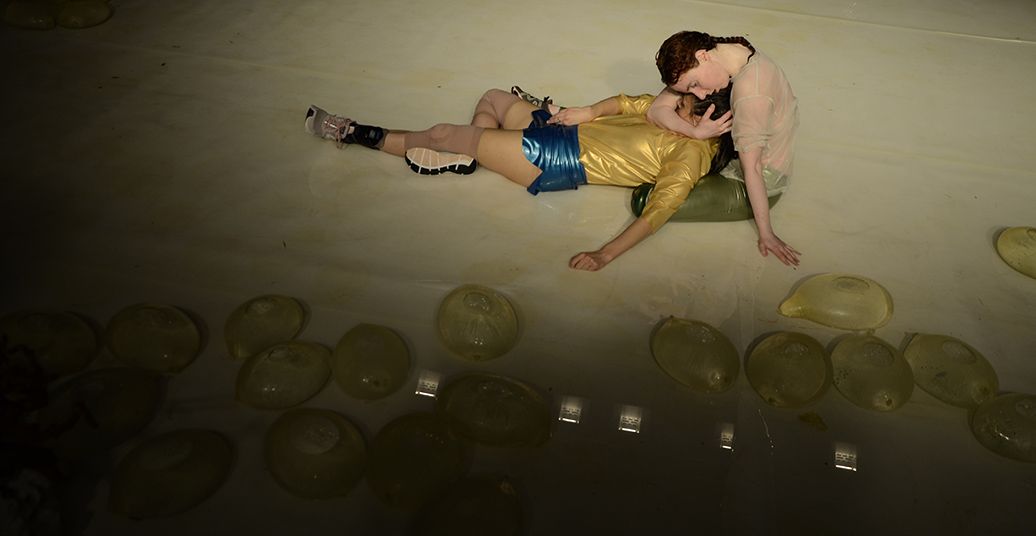 Sultriness, stifling heat fill Studio 14 in Uferstudios. The slightly musty, iodine-drenched smell of seaweed floats in the air. Three bodies lay lifeless on a stage floor cum shallow pool amid condoms inflated with water, seaweed or blood-red liquid, scattered branches and bramble. What initially appears to be lifeless flotsam, slowly starts to move. Bodies, at first sluggish and cumbersome but then increasingly more active and alert, attempt to lift each other and hold themselves up. But they slip, fall down, stumble, catch themselves again, and slosh in the water, which splashes about and makes waves. When they glide through the ankle-deep water and cuddle up together, it is reminiscent of the slimy, slippery consistency of the bubble-like formations of organisms. I feel how the humidity in the room is going to my head. The ice cold outdoors is long forgotten.

The three dancers Claire Vivianne Sobottke, Kasia Wolinska, and Karol Tymiński move in a moist milieu in which water has become a lover, and the biologically binary norms of sexuality are transcended. Sexuality, as staged in “Water Sports”, seems explicitly perverse in the sense of the anti-normative. Like a driving force intrinsic in all organic and inorganic things.

Both the bodies of the dancers as well as the bubble formations are part of an oceanic garden of delights. One that begs to be nurtured and cared for: it is replanted, streams are created and currents diverted, waterfalls and fountains are constructed. But above all: water is liberated from the constricted rubber skin of the condoms. Water – that unpredictable, bottomless, and volatile element and source of all life. Here, it is not merely an object of desire and a central choreographic material, it is also, and above all, a medium that all things organic and inorganic share in common. The bodies feed off water and experience orgiastic lust when attempting to merge with it. When a gentle waterfall gushes over Sobbotke’s body or one water condom after another is burst over Tymiński’s so that, at the mercy of the water, he can visibly no longer breathe, the line between desire and self-destruction disappears. Can desire only be quenched on the brink of total physical depletion?

If the fulfillment of lust, which borders the dangerous divide to physical depletion, was originally focused on the piece’s choreographer Karol Tymiński, during the course of the performance the two dancers Claire Vivianne Sobottke and Kasia Wolinska take center stage in the ecstasy. During what is perhaps one of the most beautiful scenes, Tymiński has perched himself relaxed on the edge of the pool. Sobottke and Wolinska repeatedly fling their long water-soaked hair through the space with grand sweeping movements spraying splashes of water deep into the stage area. The surging beat of the music takes over and blasts space and bodies alike, as they expand the area with increasingly excessive movements.

When Claire Vivianne Sobottke finally screams with full force into a microphone, the mood becomes palpably darker and more violent. The bodies drift towards the brink of physical depletion. A moment of transgression. The entrance into a sphere of orgiastic and unbridled overexertion of bodies, which bursts the physical limits and at the same time the socio-culturally determined ego identity? Or the utopian creation of an orgiastic form of coexistence? In the uncertain moment of overexertion, we plunge into that which is beyond expression.