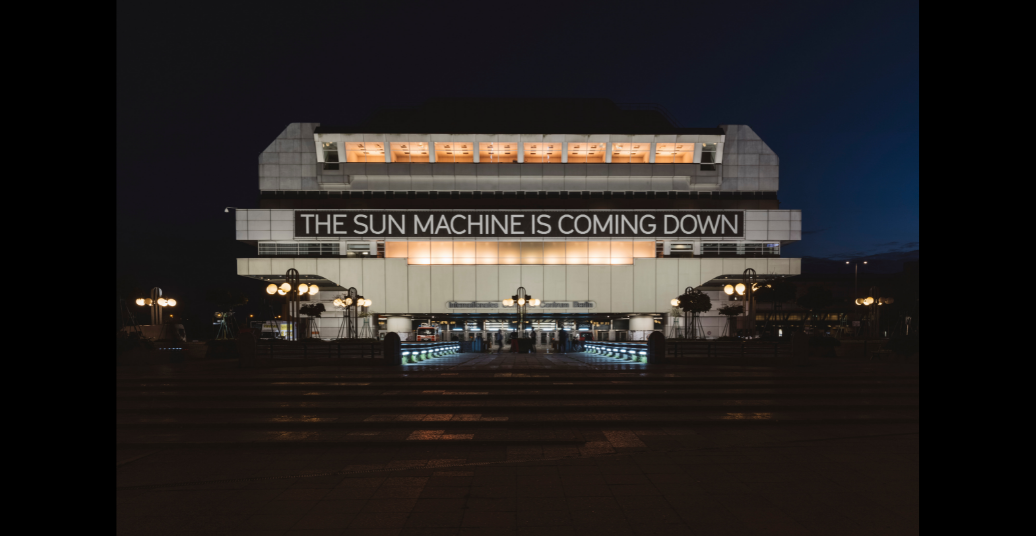 As part of 10 days of exhibitions under the title The Sun Machine Is Coming Down at the International Congress Centre (ICC) curated by Berliner Festpiele, choreographer Tino Sehgal presents “This Joy”, an impressive voice-movement piece, where the lightness of the score is brilliantly executed by eight performers.

With the event The Sun Machine Is Coming Down, the Berliner Festspiele reopen the historical International Congress Centre (ICC) after seven years of almost complete closure. The only exception was between December 2015 and August 2017 when the building was used as emergency accommodation for refugees. Initiated by Thomas Oberender and developed by a curatorial team, the event brings together a programme of permanent and temporary art installations, dance, concerts, circus, and panels that together make a three-and-half hour experience for the visitor. The title derives from a verse of the song Memory of a Free Festival (1969) by David Bowie, and it recalls an upcoming period of transformation, that, when translated to our present time, feels like it is welcoming a post-Covid era. The building is absolutely fascinating, both on the outside and inside. It looks like an abandoned spaceship yet also evokes the feeling of entering some other past time. The ICC opened in 1979 and was designed by architect couple Ursulina Schüler-Witte and Ralf Schüler who also designed the iconic Bierpinsel.

Sehgal’s “This Joy” takes the form of an ongoing performance for eight dancers based on Ode to Joy, a poem by Friedrich Schiller which was set to music by Ludwig van Beethoven as part of his Ninth Symphony and which is now used as the anthem of the EU. Previously conceived as a contribution to the exhibition “BEETHOVEN BEWEGT” (2020–2021) at the Kunsthistorische Museum Vienna, “This Joy” is presented here in a new version.

The performance takes place in a small windowless congress room, with a square motif on the carpet and low ceilings. Some dark grey seats are placed to form islands, where the audience can sit. There is no theatrical lighting other than what is already present in the room. It is a room which could potentially be exhausting and claustrophobic. Coming from some other gigantic spaces of the ICC, it takes me a while to adapt and feel comfortable here. However, I later discover, after having spent more than half an hour inside, that Sehgal’s work fits this room perfectly, making the space feel quite cosy by the end.

When I enter the room, two performers are singing and moving, making a succession of faint sounds and small movements where voice and dance connect and correspond to one another. The performers are moving in synchronicity not only with their own singing, but also in response to the voices of the others. After another performer enters and joins them. I slowly work out that each vocal composition is a choreography for a single part of the body and acts to highlight the moment of encounter between dancers.

The first feeling I have is that the performance reminds me somehow of joy manifested through vibrations: three performers react to each other’s voices with quick and lively shakings and circles of their heads and the shoulders, followed by movements of their fingers and hands. The second sensation is joy as calm and quiet: three performers lay down on the sofas, first making micro-movements and then melting into the sofas and then the ground as though they were disappearing. The third feeling is joy as encounter: where each performer is continuously listening to the other, responding to inputs and being very attentive to the audience, and looking for an emotional, connection with us. In this light, I think of it as a reference to the meaning behind Beethoven’s composition, which was dedicated to the joy of brotherhood and sisterhood between people.

The second time I enter in the room for another twenty minutes or so, a three-person choreography is taking place with some movements that recall court dances. From the point of view of sound, I am reminded simultaneously of a sounding board and a cavern, where each sound can be heard perfectly. At times I have the feeling that the performers are like birds and use their voices to reply to each other. My overall feeling is of a performance full of light that requests time and attention and which deepens my senses.

The Sun Machine Is Coming Down – Art at the ICC invites visitors to freely explore the architectural icon, which will be open for ten days, until 17 October 2021, in interaction with artistic works.

To the daily programme www.berlinerfestspiele.de/en