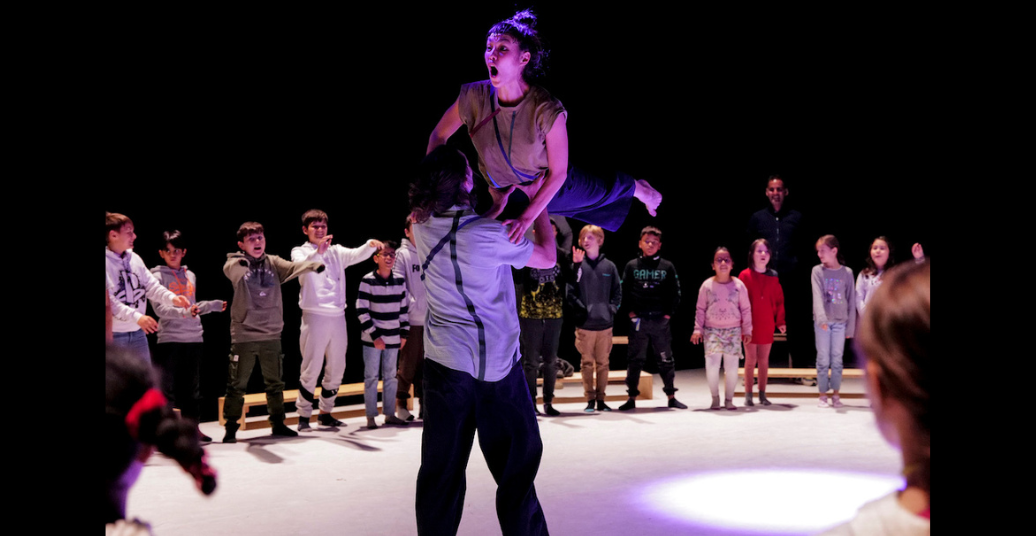 People of all genders are equal. Everyone is equal. EQUAL! EEEEEKWALLLL! Isn’t it clear by now? “EQUALITY!”, a duet by Compagnie Lindh & Weingartner is made for young audiences and brings to the stage the age-old discussion on equal-ness among genders. Presented at the opening of PURPLE – 6. Internationales Tanzfestival für junges Publikum at Uferstudios on 31 May 2022, the performance insists on its point in no less than all-caps followed by a firm fist of an exclamation mark.

A man and a woman get ready for a face-off to prove their equality. I settle into a seat along the ring of chairs, with an excitement perhaps similar to the one I (had I been alive) may have had for the great ‘Battle of the Sexes’ Tennis match between Billy Jean King and Bobby Riggs, nearly five decades ago.

My assumption that this issue had already been resolved for my specific social milieu and generation — at least intellectually — is put in question by the large turnout of adults for the performance. Adults unaccompanied by children, may I add. Certainly, in my experience of lived reality, the fight for gender equality remains a battle of our times. Now, as gender-affirming hormone replacement therapy becomes more accessible and common, the nuances of equality among genders continue to be debated and unpacked further. For instance, in March 2022, swimmer Lia Thomas’s victory at the NCAA in the women’s category after ‘medically’ transitioning, has been contested for the perceived advantages from her time living as a man. So I am curious to see how the notion of equality is explored and broadened, through another physical dimension such as dance.

Rebecca Weingartner and Benjamin Lindh Medin together create a work with high-energy, physicality and humour. Absurd antics devised to physically challenge one another shape the choreographic material and drive the conversation around the subject at hand. “EQUALITY!” begins with the two performers entering the performance space as a single body. In a jumble of hands and legs, they cling together in such a way that when one is standing up to face the audience, the other is upside down. They appear as inverted mirror images of one another. When the mirror images peel off one another, we meet Weingartner, the female contender and Lindh, the male contender, on their quest to establish equality.

Through an exchange about their likes and dislikes, the man and the woman at first emphasise their sameness and then also their differences. Their similarity in their love for the colour green and broccoli soon evolves to a sameness in their personal traits. They proclaim and then celebrate how they are equally funny, equally beautiful, equally ugly, and equally emotional. That the German word gleich means ‘the same’ as well as ‘equal’ is used cleverly by the performers to bring about transitions in their choreographic dramaturgy as well as to complicate the idea of equality: Does equality mean absolute sameness? Can we, together, be equally unique?

The duo challenge each other by proposing a range of physical feats, from somersaults and hip-hop moves, to comical moves imitating a washing-machine. Each challenge is met by the opposing contender with a competent retort by repeating the movement. The response may not always be equally impressive, but it most certainly is unique — and this is something they applaud in each other. Weingartner and Lindh, even with their two slight bodies, fill out the circular performance space with their energetic movement scores and stage-presence. They engage intuitively with both children and grown-ups in the audience, leaving many of the adults, too, in fits of giggles.

The man and the woman are shown sparring, contorting, and comparing their physical prowess. It occurs to me that equality in this contest is mostly measured in tangible quantifiable terms around one kind of display of strength – who can do more spectacular backflips? Who can carry the other for longer? Who can outdo the other? Within the physical dimension, I somewhere missed this opportunity to expand on the notion of what strength and ability actually are in terms of the discussion on equality. Who can fold the most laundry? With both performers having equally long brown hair, who can tie the neatest plait? Who can give the warmest hugs? Children, often more than grown-ups, are capable of grasping these nuanced sensibilities.

Despite side-stepping this nuance, Weingartner and Lindh together create many moments in “EQUALITY”, when the tough exterior is breached. They frequently erupt in laughter and sometimes express deep contemplation. They are also constantly changing their positions — sometimes in competition with each other, and, at other times, rooting for and supporting the other. Their masquerading competition frequently ends in a physical double-bind, their hands and feet entangled. It is clear that the only way to extract themselves from this double-bind is to work together, sometimes with the help of a young audience member, and at other times, through gentleness. In this way, we also slip into moments of vulnerability, when the performers share moments from their lives, when they apparently do not conform to expected gender norms. Briefly here, “EQUALITY!” treads into the notion of gender as a fluid spectrum.

I realise, as I write this now, that the performers never mention until the very end of the piece, that they are playing a man and a woman. They mention many other biographical details and various other vital statistics, but never their gender. Do children (who don’t read the programme notes) immediately identify this contest of equality as one between the genders? What about assumptions made by adults in the audience, when we move out onto the streets, without any programme notes for every passer-by?

“EQUALITY!” (9+) by Company Lindh & Weingartner was shown on 31 May and 1 June 2022 in the frame of PURPLE – 6th International Dance Festival for young audience at Uferstudios Berlin. PURPLE festival is still running until 4 June 2022, you find the schedule, full programme, and ticket modalities at purple-tanzfestival.de.