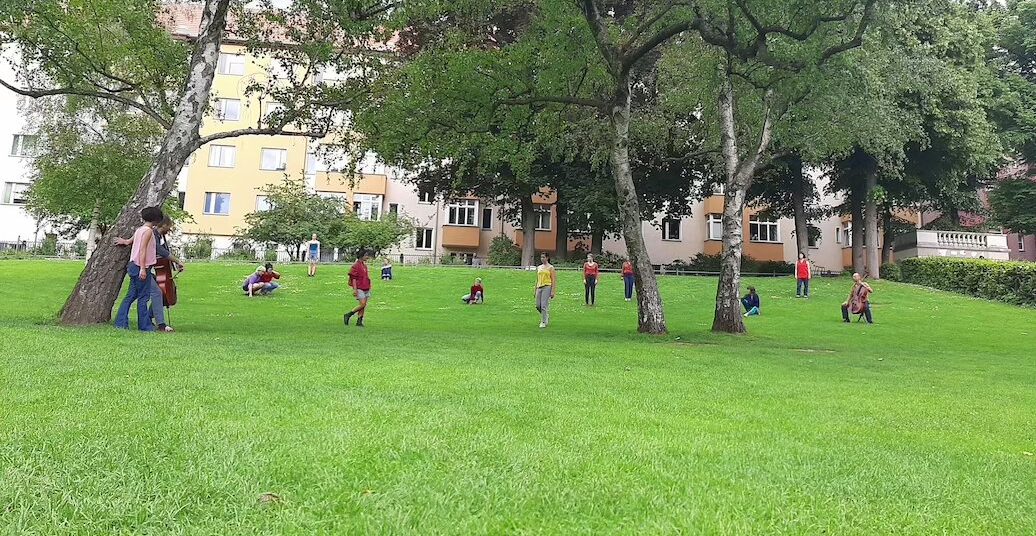 The lush green grass of Berlin’s Körnerpark gives their two bits on the performance “Embodying Landscapes” that took place at the park as part of the Performing Arts Festival Berlin on 25 May 2022.

There is momentary confusion. Which one is the performance?

On this sun-kissed summer evening, several groups of people are out in the parks of Berlin. But which one of the groups is the performance? A bunch of teenagers are challenging each other to push-up battles with a cheering audience around them. Gleeful children rattle down sloping dirt paths on bicycles. Languid bodies, infused with a joie de vivre, bask in the sun with their derrieres planted upon these green lands. Confusion is inevitable: which one of these spectacles was the performance announced as “Embodying Landscapes”?! All these bodies seem to be melting into the essence of the landscape.

I, the omniscient grass of Körnerpark, know better. I have been waiting. After all, someone had to jump through several hoops at the relevant departments of the Bezirksamt to get permission for the performance to take place here.

My green bristles have been looking forward to the warmth of human feet after the long winter. I grow in shades of light and dark, tempting eyes to linger on me and to delight in my touch. I am working on the malleability of my hips so that I can bend deeply as hands caress in arcs all over me. I yield to the excited summersaults of hairy dogs. My tips comfort their itches. I take pride in my verdant rolling tapestry that stitches the city together. It gives me joy to provide shelter — for animals both two-legged and four. A strange shelter I make, not the safety of a roof, but the assurance of the ground. For all these reasons and more, I look forward to holding space for these dancers whose work promises to be inspired by my qualities — inspired by the natural and urban landscape of which I am also a part. And hence I dare to state my opinion! Yours truly, the grass of this greatest of all cities, Berlin!

Unlike wooded Treptower Park or wild Volkspark Humboldthain, I, the grass of Körnerpark, am uniquely punctuated with flower bushes and water fountains. Concrete, stone, and webs of ivy plants collide and conquer each other across my complex multi-layered surfaces. The performers of “Embodying Landscapes” are to be found on one of my sloping sections. Some of the meandering audience members and passers-by plonk themselves upon me as I had hoped they would. Others, meanwhile, just sit on a wooden fence, straight and squared, as one would sit before a traditional proscenium. The performance has already begun.

Five bodies move to the sound of a pair of live cellos. They improvise to the music, moving to the flow of internal rhythms that seem somehow synced to one another. At times, some of the bodies withdraw into the background or rest by the trees, only to be replaced by other dancing bodies.

It is mentioned in the programme notes that the 12 dancers performing in this iteration of “Embodying Landscapes” had come together for the very first time the previous weekend for an improvisation and composition workshop, led by choreographers Rossella Canciello, Stefania Petracca, and Roberta Ricci. Following the workshop, they have gathered here to perform for this audience assembled by chance.

As they move over me, I feel the diversity in their prancing. They are all women, of ages ranging from 21 to around 60. Their movements are not all ‘regular’ professional dancer’s movements. In their daily lives, they each embody a very different habitus, which now appears to slip into their improvised movements. Here, channeled through the knees, I sense a young dancer with hours of daily practice. Elsewhere, I gather from the bones, the steadiness of Tai Chi. I keep beaming my most lustrous shimmer. It is an invitation to the dancers. I invite them to accede to gravity and embody this landscape through leisure. But my invitation isn’t taken up too often.

There are other elements too in this natural landscape — trees, twigs, birds, the vast sky — to be perceived and improvised to. Even the water fountain nearby has been amped up to its highest, so that the sound of bubbling water all but engulfs every other sound. The cellos’ notes, reminiscent of deep ocean waters and shallow waves, add to the auditory landscape. I find myself contending with all these other elements as the dancers move in response to their natural surroundings.

I suspect, however, that these other elements too only hold fleeting resonance with the dancers. It appears as though this outdoor space sometimes overwhelms their attention with its vast openness — perhaps because the weekend workshop for this performance was held at an indoor dance studio. I can sense their surprise at my grassy touch and at the sloping ground that retreats below them — so different from the solid, flat studio floor. My presence under their shoes causes friction, impeding smooth turns and flowing movement. So while the upper halves of the dancers’ bodies draw vast arc-like movements, as if painting virtuosically in the air, their feet are arrested in jerks that end with grounding lunges.

In some bodies, I sense an acceptance of this ‘natural’ predicament. Their movement patterns weave in that which is offered by my slopes — a playful tumbling fall-and-catch and physical expressions of shifting off-centre. Nonetheless, even these are no more than momentary engagements with the landscape. Even among the trained dancers, the habits of bodies tend to supersede the opportunity of simply experiencing the grass. Those are the moments when I lose connection with the bodies — when they begin to move as they would in a mirrored studio. But, after all, being grass, and sans a human body, perhaps I am expecting too much. Perhaps, it is not so easy to let go.

Other performers in the group tap into the notion of the park as a space of rest and gathering. Two bodies end their flurry of movements with an eager lean upon each other’s backs as they slip downwards, to sit upon the ground. As they remain unmoving, their collective breathing becomes visible in this position of supported rest. Like so much in “Embodying Landscapes”, this rest too is brief. A manic churning of inspirations from nature is apparent in the embodiment of this performance by the 12 bodies.

I accept my place as the humble grass. Just one among this landscape’s many elements.

The site-specific performance “Embodying Landscapes” by Rossella Canciello, Stefania Petracca & Roberta Ricci (Cello: Gábor Hartyáni, Hannes Buder) with the participants of an Intensive Workshop the previous weekend in DOCK 11 took place in the afternoon of 25 & 27 May 2022 at Körnerpark.

This year’s edition of Performing Arts Festival Berlin is still running until 29 May 2022, find the full program here.