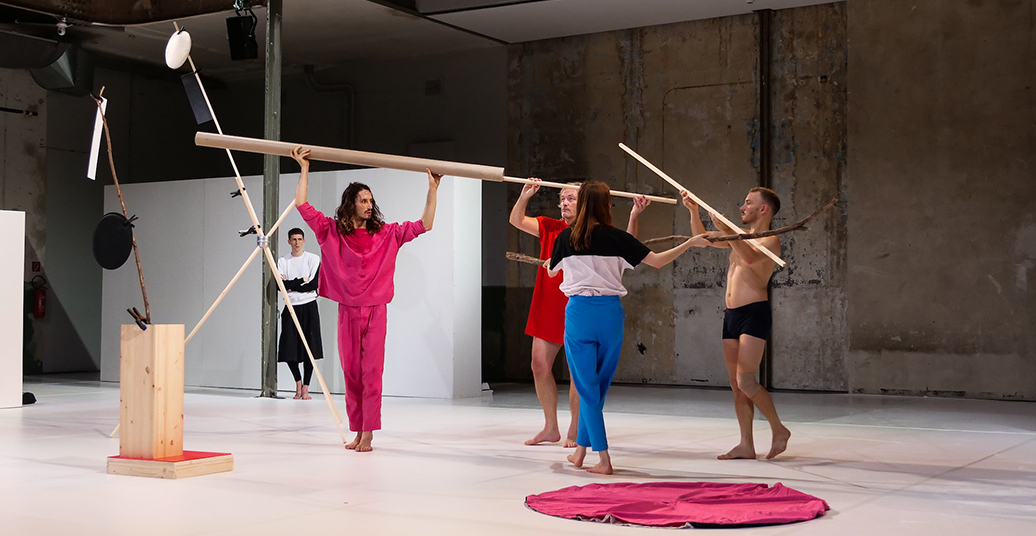 Peter Pleyer has been an observant participant of the Berlin dance scene for 20 years, not only as a dancer and choreographer, but also as a dramaturg, lecturer, and Director of Tanztage at the Sophiensæle (2007-2014). He talks about his own past, the present with COVID-19, and the near future of more sensible and effective networking within the equally diverse and precarious contemporary dance scene in Berlin.

Jette Büchsenschütz: In your performance “Ponderosa Trilogy” (2014) you refer to yourself as the son of Robert Rauschenberg and Steve Paxton. How did they, of all people, influence your choreographic development?

Peter Pleyer: It’s not so much about the influence that the two had on my choreographic work. The anecdote refers back to my first solo, “Choreographing Books” (2005), which I created in Berlin. It features a book by Jill Johnston, a critic who accompanied the Judson Church as a writer and is herself a lesbian. In her book, she reveals private details about the Judson Dance Theater clique and the Cunningham Company. And she writes about Robert Rauschenberg, Cage, and Cunningham, who were always very reserved when it came to statements on their sexuality. It was the 50s and 60s!

Jill Johnston’s narratives really resonated with me. I was interested in the stories being swept under the carpet or happening behind the curtains. The ones that aren’t public, where you don’t believe what you see, but instead keep prying and looking in all the corners. And that’s where I read that Steve Paxton and Robert Rauschenberg were a couple when I was born. And it was totally obvious to me that, in another, utopian, fantasy world, the sex those two had could have called me into being. My life in relation to dance history!

You came to Berlin in December 2000, so exactly 20 years ago. How has the dance scene changed since then?

Oh so much! When I came here, I was really impressed that there were three ballet ensembles. Kresnik was at the Volksbühne, there were Tanzfabrik, DOCK11, TanzTangente, Sasha Waltz… And I thought: it’s cool to come to a city with so much dance. But then I quickly realized that there was a serious lack in the independent dance scene structures – the quality was also seriously questionable. I saw a lot of dance between 2002 and 2005 that I didn’t like. Rent wasn’t very high, I had a job and plenty of time to check out a lot and try to comprehend the structures behind it – which wasn’t very easy.

The ZTB – Zeitgenössischer Tanz Berlin / Contemporary Dance Berlin e.V. was also founded that year. Barbara Friedrich was the first director of this association and accomplished an incredible amount for the independent scene, also in her role as Director of Tanztage Berlin. I was on the board of the ZTB, making me a co-founder of the HZT (Hochschulübergreifendes Zentrum Tanz / Inter-University Center for Dance Berlin, note from the ed.) in 2006. In this sense, a whole lot has happened in the past twenty years. But there have been enough setbacks. All three ballet companies were merged into one, Kresnik disappeared, there’s no longer a fixed dance company at the Volksbühne or any other theater, and Sasha Waltz is no longer directing the Staatsballett. Not so much has actually changed structurally since then.

Qualitatively it has. Not just with the establishment of the HZT, but also with the start of Dance Studies in 2005. That of course led to significant improvements at the dramaturgical level and in the way dance was discussed and written about. But since there is still too little structural funding in contemporary dance, not much can be firmly established. I see it with myself: one of my biggest deficits is that I’m not combative enough.

What is the backstory behind the creation of the company Cranky Bodies? Why found a company now during the pandemic – and in your case perhaps also, why only now?

The idea to found a company has been growing steadily alongside my pieces since 2014. That’s the year when I was invited to show my solo “Ponderosa Trilogy” at Tanzhaus Düsseldorf and got my first grant in Berlin for my big group piece “Visible Undercurrent”. The company grew with the idea that dancers, musicians, and visual artists could work together, learn together and produce together here.

Actually, the company’s founding had less to do with the pandemic than with the support of DOCK11 and the revival support for “Cranky Bodies” that existed at this point in time. It was less about founding a company like Sasha Waltz or Toula Limnaios’, and more about testing out what a company can mean in the 21st century. The company as a research project. What does it mean when we call ourselves that?

A company provides cohesion, you can apply for additional funds with one, you can perform differently. Founding Cranky Bodies is the result and continuation of six years of work in this group.

What can we imagine with “cranky” bodies?

There is indeed a historical reference to the piece “Cranky Destroyers” (1988) by Stephanie Skura, which was really significant in the late 1980s. Cranky means bodies that aren’t mainstream, not necessarily young, but encompassing all possible body types. I myself don’t necessarily have a dancer’s body. Definitely an agenda point for the future: getting more and more cranky!

What can we or should we – and by we I’m specifically referring to dance professionals – learn from the now two lockdowns? This question is being hotly and controversially contested in the art world.

What I like is that people suddenly have more spatial awareness. They’re learning to judge and maintain distances and hold space for one another, even if the motivation for doing so certainly isn’t respect, but rather fear. What matters to me personally is that we ourselves have more freedom of movement. I noticed that, for example, at the Black Lives Matter Demonstration, where people were no longer marching side by side in one direction. Instead, people knew to establish communication from a distance. The spatial distance was ideal for gaining different perspectives. These are aspects of the pandemic that I find fun.

But I also reflect on the aspect of touch: when you can’t physically touch someone, what tools can be used to create this energetic connection, which functions very differently than visual touch. Is there a possibility to open hearts? Can we communicate more through our eyes? Are there perhaps possibilities to exchange energy, which we haven’t yet tried, which might all of a sudden be more important than physical touch? We don’t always have to be flinging our arms around one another. Instead we should also consider what closeness do I really need, who do I want to maintain more distance from?

You actually just answered the last question I wanted to ask you. But I’ll ask you anyway: is dance perhaps exactly the medicine our bodies now need during the Corona pandemic, as New York Times dance critic Gia Kourdias already described in April?

I also believe that we’re better equipped to deal with the restrictions as dancers. However, we’re even more aware of what we’re all lacking right now. Being together in groups – to come back to Cranky Bodies again – is simply different. When you can dance and compose together for an hour as a group of nine, so much knowledge can be articulated! The mutual perceptions when coordinating and timing – there is so very much that we’re missing.