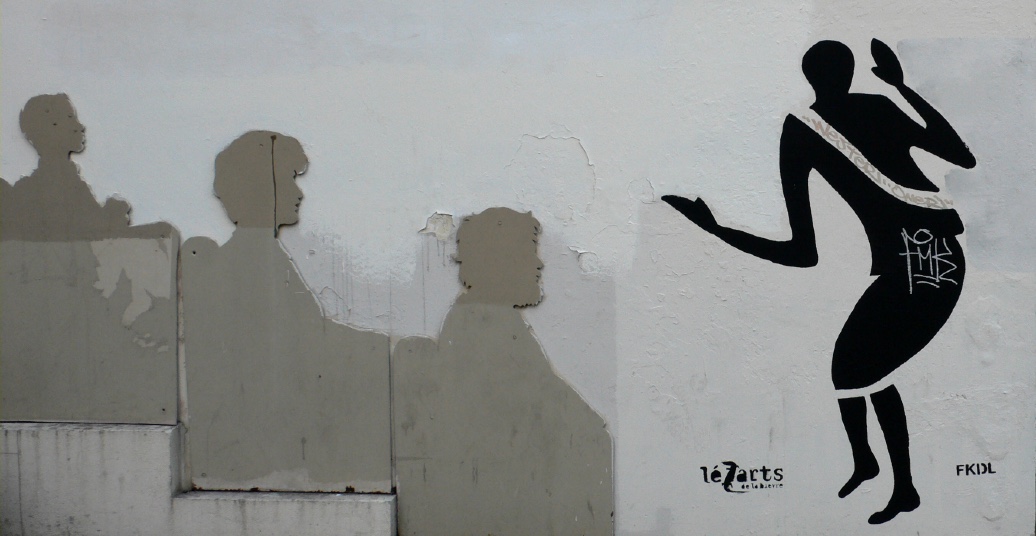 Goitseone Montsho* reckons with, and contemplates how, Black femmes use fashion to return, pacify, and engage the white, male, and cis gaze in Berlin’s performance scene.

A picture of a woman sits on my desk. She is Black. She stands on what can only be considered a soapbox, and around her are white eyes watching and prodding at her naked form. It is a well-known French print called ‘La Belle-Hottentot’,  and it is of Saartjie Baartman, a nineteenth century Khoikhoi woman, who was paraded on European stages as a ‘freak show’ due to the objectification of her large buttocks and her perceived ‘otherness’ in relation to white ideals of femme bodies. This is a picture that says a million words, and has stayed with me on my journey of self identification and has been profound in defining the white male cis gaze.

Saartjie Baartman is always depicted naked or wearing a loose brown covering. But her buttocks, which are the ‘show’, are always in view. In this European discourse laced with pseudo science, is a theory that a woman is someone given respect or humanity based on their humanness. Saartjie Baartman fails this ‘human’ test and this allows those who come to see her ‘performance’ to prod and poke and fetishise her.

The Collins Dictionary defines a performer as: ‘a person who acts, sings, or does other entertainment in front of audiences.’ The word ‘person’ in the definition relies on a sense of personhood, of agreement, and of humanisation — something that was not a given to Saartjie Baartman or many other Black femme bodies who find themselves on the stage. The stage for their perceived ‘otherness’ is already set before they can perform on a stage of their choosing. This could be seen as a ‘performance’ within a performance. The practice of exhibiting Black female forms, in juxtaposition to whiteness and as a validation of white superiority, is a historical precursor to how Black femmes are seen and received on the stage.

The year was 2009 and I had just moved to the city of Berlin. In the very same city, I watched on my laptop as South African athlete Caster Semenya sprinted through a sea of white bodies, sporting thigh-high jogging shorts, her chest proud, and her wide shoulders jutting out of her muscle shirt. She made it first to the finish line at a record breaking 1:55 minutes for the 800 m sprint. Caster Semenya would later have to defend her title and her place in women’s running competitions when the IAAF barred her participation based on ‘hyperandrogenism’, a condition that supposedly makes her body produce more testosterone than the ‘average’ woman.

“Society wants to pin black femmes into a box and there is no box…” said Maiy Cade, a performance artist based in Berlin. Black femininity is diverse and unique to each individual who wears the label. There is no monolithic definition for something as encompassing as ‘Black femininity’.

“The way we adorn ourselves is to creatively say I am … I am … I am,” said Keith Zenga King, a theatre curator. From slick back pony tails, baby hairs, and box braids, to long colourful acrylic nails, head wraps, and cornrows … on Black bodies, these are always considered ‘tacky’ and ‘unprofessional’. There are no specifics in regards to what we consider Black femme fashion. It is merely fashion worn by people who identify as both black and femme. However, due to the historically oppressive nature of how Black femmes are received in public spaces and performance stages, it will always be political. It is filled with the audacity to respond to the reduction of one’s body as a site of poverty, of disruptions, and of violent projections. It returns a shady gaze to the expectations that come from what is seen as less, to a place of self-determination revolutionising the idea that ‘poor Black people can’t have access to nice things.’ What the runways refer to as‘streetwear’, and social media as ‘instagram baddie culture’ is a form of commodity fetishism of Black femme aesthetics without credit — and sometimes even humanity — granted to its producers.

White women — specifically white middle-class women — are often allowed the privilege to ‘perform’ various aspects of their femininity, and even co-opt Black femme aesthetics, without being labelled as ‘tacky’ or ‘unprofessional’ and without the hyper-sexualisation of their performances of self.

On stages set by mostly white directors, white management, and white creative eyes, Black femme performers find themselves being pushed into stereotypical roles or having to reduce aspects of themselves in order to survive performance spaces. Recently, the Berlin State Ballet had a call out from one of its former ballerinas, Chloé Lopes Gomes, who accused the institution of failing to protect her from the outrageous and persistent racism perpetrated by her ballet mistress. The incident has prompted a wide range of responses and support from Black performers notably from Misty Copeland, who has been an advocate for diversity in the dance community. Learn more here.

Recent movements sparked by anti-police brutality protests in the US and the Black Lives Matter movement have put a necessary spotlight on the fashion and performance industry, forcing corporations to ‘diversify’ their practices. Although this has mostly been done on a superficial level by rebranding and tokenising the experiences of Black creatives, it has also bought conversations about Black performances to the forefront, and has inspired small actions of change.

Fashion is intrinsically tied to oppression and Black fashion aesthetics have always been seen as ‘ghetto’ until proven fashionable by the white gaze. Black performers therefore face the painful reality of racialisation and hyper-sexualisation.

“As a Black femme body regardless where you go in the world people are going to have a certain perspective of you and you are going to be boxed …” said Esther Jeroboan, a performer from Berlin.

According to Eurocentric classificatory practices, the Black female body is a ‘primitive’ other that deviates from the Eurocentric standard. From Saartjie Baartman, to Caster Semenya, this perverse history of othering — based on what the white cis male eye can see and its reactions to what it sees — has violent repercussions for Black femmes and informs how they walk through the world. It is the eye that says Black femmes who dress a certain way do not deserve justice when something horrible happens to them. It is the eye that forms ideas about Black femmes and therefore their place in society.

The Black creative response to the cis white male gaze has given birth to a myriad of productions, mainly from Black femme performers, Black creative directors, and artists setting stages for their own performances on projects that centre Black femme bodies and their various experiences. The hierarchy of performance shifts greatly when Black femmes are given space to self-determine and the freedom to represent themselves. The intersectionalities of Black culture, specifically Black femme aesthetics, therefore continue to disrupt and resist this experience of being constantly watched and policed.

From Saartjie Baartman, to Caster Semenya, and, today, Chloé Lopes Gomes, European stages were never set to accommodate and represent Black (and especially Black femme) bodies in their full expression, and have always relied on racist tropes of what it means to be Black and femme in its creative depictions. Black femmes like Maiy, Esther, Keith, Chloé and Caster continue to command this relentless gaze upon the very same stages that were set to discount them.