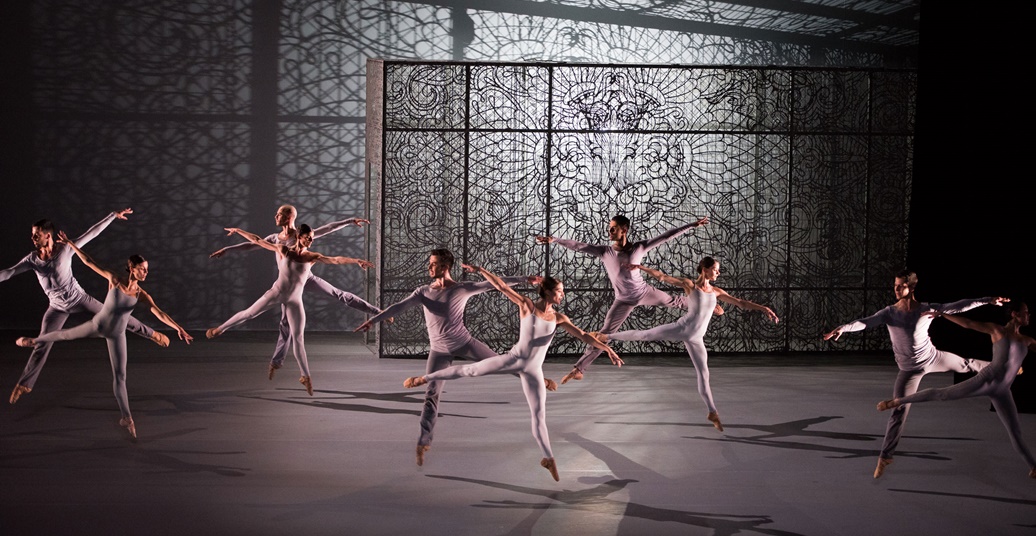 In honor of its 30-year anniversary, the Haus der Berliner Festspiele heads underground from “Trois Grandes Fuges” to post-digital visions for the future.
Before this text embarks on the three “Grandes Fuges”, standing ovations, canceled flights, and three outstanding choreographers – Lucinda Childs, Anne Teresa De Keersmaeker, and Maguy Marin – I am first drawn to the basement.

“Nice Software” – Or: Does Neo-Liberalism Bear the Serpent Head?
THE AGENCY with “Medusa Bionic Rise”

Following all this “high culture” (three times Beethoven), is it all just downhill? In any event, it is a truly courageous curatorial decision to juxtapose the three grandes dames of the fugue with the experimental and immersive performance group format THE AGENCY. From musical and dance flights of fancy, we descend into the orchestra pit. There, in the pit of the Festspielhaus, a futuristic spaceship appears to have landed. Or did we simply miss the dawn of the post-digital age? In “Medusa Bionic Rise” – “MBR” for short– THE AGENCY declares the conquest of the physical, of humans themselves, to the benefit of its absolute optimization.

“When technical progress already holds undreamt of possibilities, why not take advantage of them for themselves?”, ask the performers, whose intent is to give the impression of being half-way along the path to becoming man and machine hybrids. They speak to us through mechanical gestures, move absently/remotely-controlled through the vaults following the example of digital prototypes. They herald from a world in which death knows no boundaries, where mankind has transitioned to demigods and trans-humanistic beings. These modern day Medusas don’t turn onlookers to stone. Instead they spend their nights in fitness studios, still feeling good all the same.

THE AGENCY balances itself with emphatic indecisiveness on the narrow border between self-exploitation and self-empowerment. The performers demonstrate their fitness with sit-ups, knee bends et al – don’t forget to smile–, pose on catwalks and behind frosted glass in flashing sneakers while flaunting their bodies, call on the audience to complete small but harmless “challenges”, and offer them home-mixed “post-work energizer drinks”. (After 40 sit-ups we are rewarded with a sticker). In the back tier of the space, there is a kind of co-working area where you can view video messages from supposed post-digital transformation influencers who have adorned themselves with genetically modified facial skin, showcase fashionable prosthetics, and explain how to hide yourself from online facial recognition with simple makeup tips. It all teeters between a merchandising event and a happening.

Over the course of this two-and-a-half hour performance, which strives towards immersiveness because there are no recognizable boundaries between “theater” and “reality”, viewers hardly have an opportunity to react with any modicum of subversion towards this dubious situation (save for leaving the room). It is not really possible to engage the performers. Their gestures are directed towards a (digital?) exterior, an imaginary fanbase(?) and mainly remain representative. A performer sits next to me. She looks deep into my eyes, introduces herself as “Spike”, and wants to recruit me as an “MBR member”. Before I can actually consider or am even able to find out more about the conditions of the secretive membership, she is gone. This intermezzo is indicative of the basement club atmosphere, where despite close proximity and an immersive concept there are hardly any points of contact. The performance, with its event-like nature, invokes neo-liberalism mechanisms in which everything –even social togetherness – has become a product. With red ribbons around our necks, distributed to all viewers upon entering the space with a suggestive look and a compliment from the bouncer – “nice software” –, we have already effortlessly given our consent. This small symbolic trick identifies us as part of a sworn society, and functions fairly well as such. Again and again I encounter groups of people, arms crossed, standing in a corner – the red ribbons between their shoulders lend them authority and a raison d’être, it gives them permission to linger with “importance” instead of “boredom”.

Whereas dystopian visions of immortality and “survival of the fittest” should cause you to choke on your bubble tea, the criticism of this self-optimization craze is almost served up too innocuously (the only thing that really bugs me is the gooey energy drink). Everyone looks good. Airy athleticism, wantonly serene. Though there is an atmosphere of latent discomfort, it is bearable.

THE AGENCY works on the point of intersection between art and economy. Neo-liberalism has become the source of its research, and that is perhaps why “MBR” itself vacillates indecisively between criticism and exploitation/affirmation of the same criticism. When the doors open to pleasant techno music at the end of the piece, I hand back my red ribbon in order to reemerge strangely untouched from the digital underworld.

Three Grandes Dames and an Odyssey

Perhaps Beethoven is to blame for THE AGENCY’s Medusas lack of terror. In any event, three intense “Grandes Fuges” preceded them on the Haus der Berliner Festspiele’s big stage. Even without two canceled flights from Lyon and the odyssey to Berlin (including warming up in a train compartment), the Ballet de lʼOpera de Lyon dancers deserve the utmost respect. After an already impatient Berlin audience, which had been waiting for a good hour (?), learned that the dancers were only able to set foot on the stage shortly before the performance, a standing ovation and thunderous applause was somehow inevitable.

When Beethoven presented his Great Fugue in 1825, critics at the time alleged he was insane. And almost 200 years later, this work sounds in parts undanceable in the three musical variations from this evening. What is exciting are the approaches the three choreographers took towards the Great Fugue. Of all people, it was Lucinda Childs – post-modern dance icon – who chose the most classical path. The 12 dancers move with strict formality, reduced movements, and ballet vocabulary to the orchestral version of the music by the Orchestre de lʼOpéra de Lyon from 2016 and in so doing visualize its structure. It is pleasant to watch and, to the point, dance and choreographic precision. Anne Teresa De Keersmaeker makes Beethoven’s impact felt – she focuses on the physical power of the music, has her 6 dancers rolling on the floor with relaxed power, jumping in the air with tucked up knees and elbows, and whirling around acrobatically until the music suddenly extinguishes the light in the last full jump. With her quartet, Maguy Marin manages to create the most exceptional and perhaps most resistant approach. The four dancers, dressed in red skirts and tops, refuse to follow the music, oppose it, and highlight above all its destructive, heavy (over)tones. With rounded backs, twisted limbs, and thrusting back their heads with unbound, flying hair, they fall again and again to the floor, stand on broken scales like weeping willows, emphasize the vulnerability of the body. When they constantly rise up against an unknown but omnipresent and apparent threat, clap their hands on their thighs and challengingly, almost angrily, direct their gazes towards the audience, the whole struggle becomes palpable and it is almost impossible to escape the four. Through the dance, the oldest recording of the music feels alarmingly edgy, merciless. And thus the festival begins with three big exclamation points: music, dance, emotion.