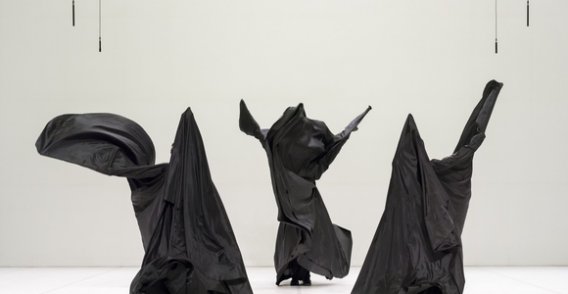 Jacques Ranciere, writing on Loïe Fuller’s dances in various works including in Aisthesis and Modern Times, insists that her ever-shifting shape was not a statement about the “universal movement of life”, but a series of images which produce one other: an image which begets the next image. It was her freedom, allied by the cloth, to create any movement, any form she likes, he maintains, that, coupled with the emancipation from the “perversion” of ballet’s “twofold constraint or narrative expressivity and mechanical virtuosity”, let Fuller fulfill an “expansion through which the self-affirmation of the individual loses itself in the power of the un-individual.”* It was a paradigmatic power which lay in a series and multiplicity of images in which a vital visual chain and a blending of object and body took place.

Paris-based Polish choreographer Ola Maciejewska, also a reader of Ranciere—her recommended books to the Tanz im August library consist of Ranciere’s Aisthesis , Bruno Latour’s Resembling the Social and Michel Serres’s Parasite —reinhabits the movements and images of Loïe Fuller. In Maciejewska’s version, however, the mechanics are not of one body creating an evolutionary chain of images but on shifting morphologies with already multiple origins which change and challenge our perceptual boundaries.

Beginning with a bare and blindingly white stage, we get our first experience when one lithe brown naked human comes onto stage and slowly begins to unfold black fabric onto the floor. Two clothed compatriots follow, similarly laying down and unfolding their parcels of material, and here we are given one of the first big differences from, and paths into a revisioning of, the original: the weight and temporality, viz. somehow the reality, of the materiality. Once the black circles are laid and climbed into, the three performers strikingly and somewhat spookily pace the stage geometrically, introducing us to the live-recorded sound and its amplification (captured by six elegantly dropping microphones) that will augment the rest of the work—an apt choice that keeps all of the components of the piece originating in the essentials of body/fabric/form but adds incredible drama. Cheekily, representation of Fuller’s own iconic motion pathways starts out glibly, before descending into expansive, battering swings of movement.

As the lights decrease to near darkness, we descend into a still lagoon of object solos where for perhaps the first time, but not the last, we will be introduced to wholly otherworldly forms. This is one of the supremely startling and touching aspects of the work: moments in which the real and unreal come together before our eyes in ways that feel so vivid they are transformative.

As movement reenters the scene, progressively robust, we arc toward a visual and—due to the nature of the live-recorded sound—auditory climax. In her post-show talk, Maciejewska says she was touched by the connection between the performers that evening, and indeed what we witness is not just an aesthetic climax, but also a social one. If Fuller’s work is an “intoxication of art and industrial accomplishment”,** “Bombyx Mori” lets the seed of Fuller’s figure and fascinations grow into something deeply stirring in our own time: objects not only of mechanism, cinema, and illusion, but also of palpable materiality, and the porousness of animal, human, and object. Through Maciejewska’s eyes we see a wickedly beautiful future, a dark, precise, and sensory post-humanism in which a networked sociality and energetics move vitally between organisms of all sorts.