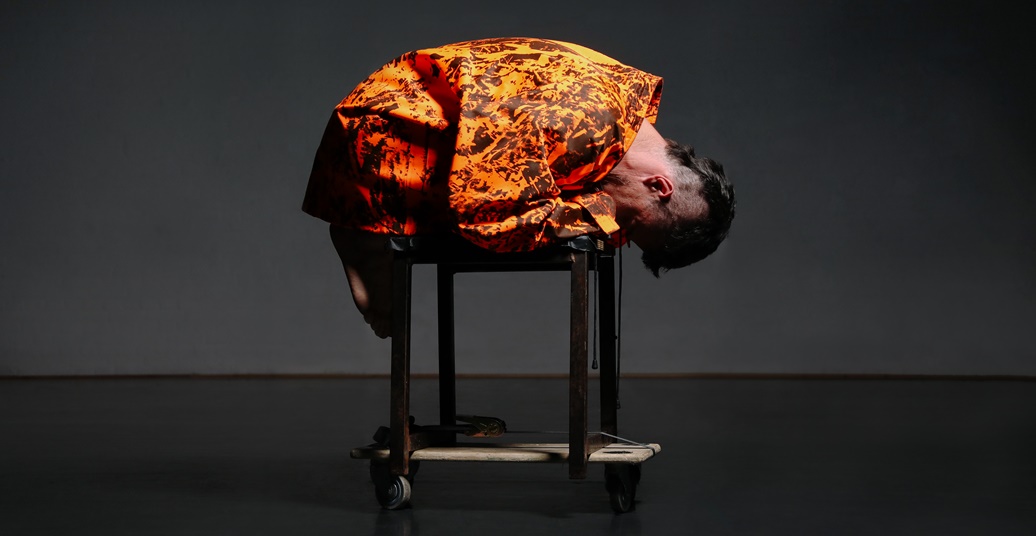 A figure, whose upper body is covered by a heavy, orange-black speckled cape, paces through the rows of the audience with slow, precise movements. Like a bird whose plumage is cloaked by the cape, the dancer deliberately chooses each step, placing the entire sole of his foot on the floor, stopping the movements with his knees – his gaze is fixed, slanted downwards, absently/manically on the room before him. In this way, Thiago Granato enters into a kind of ritual or necromancy, beads of sweat form on his brow and drip to the floor. His shoulders bounce up and down, the jacket sleeves are cast aside as if he wants to shake off the past (and at the same time the future?).

Granato has devoted himself to a matter as rampant as it is legendary: the archive. As a metaphysical thought space, it confines everything around us while simultaneously eluding accessibility. “Trrr” responds to this paradox with some despair. An almost choleric cry, disbelief: “EVERYTHING THAT EVER EXISTS WILL DISAPPEAR” stirs the audience from its trance and temporarily delivers Granato himself from his agony. With a long breath, he sucks in air. And with it, the light disappears into total darkness.

What follows this concentrated and finely-worked prelude is an attempt at a narration that is at moments saturated in vanity and severe pathos. Thiago initially positions himself bent forward and kneeling on a lit pedestal in the middle of the space. A collection of loudspeakers and cables crisscrossed by colorful lights towers above him – offstage voices, ghosts of the digital age. The body-cum-living sculpture rears up, revealing its nudity, and presents itself as a metaphysical layer of sound and sacral light in unashamed (self)-exaltation.

When the mysterious and naked figure moves in half-shadows, arms chopping through the space in swiping motions, it elevates itself to a projection screen for life’s big questions (Past! Permanence! Infinity!). However, this kind of subjective transcendence remains wholly and subjectively attached to the body. It does not manage to save itself beyond the narrative level. The problem begins in the moment when Granato starts whispering words fraught with meaning throughout the room in a disguised voice in an attempt to give his figure a prophetic character… The questions, which can then be posed hardly transcend the worship of the body as a projection screen, as a place of longing for transcendence and self-invoked omnipotence.

When he strikes up a song together with the audience at the end of the piece, I find it difficult to join in. There are no more ghosts in sight.