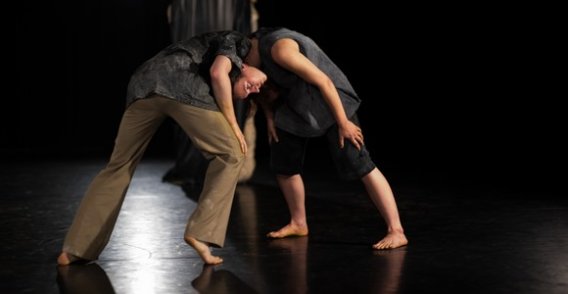 In honor of its 40 year anniversary, Tanzfabrik Berlin invites us to look back at its beginnings – but not without opening the Uferstudios stages to young artists. A review of the program from 17 July 2018.

40 years of Tanzfabrik Berlin. This also means a return to the West Berlin of the 80s, a self-imposed refuge for all the creatives, the political, the dissidents, those who lived and loved differently. This island in the middle of the former GDR will forever remain a place of longing, one to which we (today’s dance scene) can only glimpse back on in dreamy-eyed wonder – even if some of us had not yet been born.

The history of Tanzfabrik is first and foremost a history of performers. In her video installation, Andrea Keiz assembles clips from 22 interviewees who belong(ed) to the first generation of Tanzfabrik, though the filmmaker emphasized that the list of those who should have been asked was much longer. She asked dancer-choreographers from the early days about their training and artistic/collective development – how they started dancing, how they came to Tanzfabrik, and when they departed.

The task she embarked upon, with the intention to reflect back on this piece of Berlin dance history and also fill a gap in historiographic research, is undoubtedly not an easy one. It is hardly innocuous to talk about beginnings. An exchange with Claudia Henne at the vernissage already made clear the kind of sensitivity that peering into the past requires. The questioning of the past ushers in a struggle for interpretational sovereignty, for attention, and an effort to present one’s (own) history in “the right light”. With her installations, Andrea Keiz wants to highlight the ambiguity inherent in oral history, to establish a polyphonic collection of perspectives and vantage points. Even before anything at all appears on screen, it is apparent how all human relationships, the entanglement of art and life, farewells and new beginnings have shaped history. The “collective”, referred to with well-chosen words – a delicate question of who belonged when and for how long – lasts to this day. It is precisely those collective, horizontal structures that appear to have demanded so much from their actors. And yet it is perhaps precisely these struggles to which we owe the diversity (The discussion culture! The experiments!) of the Berlin dance scene.

“One-Way-Ticket to Berlin”
Andrea Keiz is less concerned with drawing linear lines than bringing personal memories to the fore. We see erstwhile dance pioneers in front of their bookshelves and house plants, names intersect – “I came to Berlin because of XY”/ “XY invited me to do a piece with him*her” / “there was a room available in the flatshare”…

It is also worth glancing back to understand the evolved structures of today’s dance scene. For example, the role that former Wigman students like Helmut Gottschild and Petra Kugel played in the development of dance in Berlin is remarkable. That is how Christine Vilardo, the “Woman from America” and Gottschild’s former student, landed at Tanzfabrik. The connection to the United States, the “home of BMC” (Ka Rustler), was decisive in the development of post-modern dance in Berlin. Trisha Brown danced across the rooftops of New York, and performances took place near/on/in parked cars and trunks (Abendspaziergang (Evening Stroll) 1982) in the Tanzfabrik courtyard.

“West Berlin was not Germany for me”, says Lotte Grohe. Ingo Reulecke speaks of “young savages”. Dieter Heitkamp relays how he slaved away in the gymnastics and sports world in the FRG in “Sieg der Körperfreuden (Victory of Bodily Pleasures)”. In addition to the personal narratives of the interviewees, the historical video material clips assembled in the video installation are gripping. They make clear which artistic fields were being explored – like encounters between music and dance in the piece “Begegnungen (Encounters)” (1989), or work with text collages in the piece “drin und gewinn, immer so hübsch (in and win, always so lovely)”, based on a text source from Gertrud Stein (1983).

“And Then the Wall Fell”
From our present day perspective, it all seems so carefree: like freedom and adventure beyond the constraints of production. “No job, no money, but a whole lot of time)”*1 The institutionalization of Tanzfabrik, increasingly professionalized structures, funding from the Senate, the visions – it all collapsed a bit with the fall of the wall. It would be fascinating to capture the voices of dancers in the new federal states as well, for whom 1989 might have primarily signified an awakening rather than a demolishing. Here, too, it becomes obvious from how many perspectives history can be related…

From our present day perspective, it all seems so carefree: like freedom and adventure beyond the constraints of production. “No job, no money, but a whole lot of time)”*1 The institutionalization of Tanzfabrik, increasingly professionalized structures, funding from the Senate, the visions – it all collapsed a bit with the fall of the wall. It would be fascinating to capture the voices of dancers in the new federal states as well, for whom 1989 might have primarily signified an awakening rather than a demolishing. Here, too, it becomes obvious from how many perspectives history can be related…

It would be worthwhile, and a rather trailblazing effort, to embed all these connections into one comprehensible and scientifically sound narration – a chronology of Tanzfabrik and contemporary dance in Berlin! One thing is clear: this history can only be told polyphonically – along with the protest, discussions, and conflicts.

The plan is to edit and make available all the full interviews, the installation, and any additional quests for traces on a website. 40 Years of Tanzfabrik – A History in Motion.
*1 Andrea Keiz’s response to the question of how she found herself at Tanzfabrik.

II) André Uerba: “Burn Time”
It almost seems as if the loose ends of history, without which one is unable to glance back in time, have been unraveled, strung together, and hung up in horizontal lines in André Uerba’s choreographic installation “Burn Time”. Spaces are formed by transparent threads along which the performers position themselves to set them aglow. Like fireflies, the quivering flames ascend imaginary, rickety steps. The performers position their thumbs precisely on the lighters – ssss. Flickering and crackling fills the room. The small flames do somersaults in a calm race to quickly extinguish themselves. As they run along the sides of the transparent rectangle, it seems as if a theater curtain is opening – and behind it more new spaces appear: no end in sight. The calmness of the performers Phillipe Enders, Jorge de Hoyos, Sonia Noya, Olivia McGregor, Jan Rozman, and André Uerba envelops the entire room– the flames cause images, memories, thoughts to flare up and drift away. “Burn Time” demonstrates anew that beauty can be an unadorned and clear concept, even if the impact of a conspiratorial meeting temporarily imposes itself. Oversized shadows appear on the walls calling to mind Plato’s Allegory of the Cave. There is no yearning for the “outside”, of which we know nothing. We can hear each other breathing. Some of us have laid down – above us a collection of dancing flames – a starlit sky.

III) Lina Gómez: “A Passo di Mulo”
The works of choreographer Lina Gómez are challenging and moving because they ask the big questions. What remains (of us) when we move on? In “A Passo di Mulo”, four dancers stroll through imaginary landscapes, turn their backs on the future, and enter into resonance chambers between music and the body. Bella Hager, Julek Kreutzer, Camille Chapon, and Diethild Meier expose themselves, each other, and the audience to a series of transitions. As border-crossers between worlds, they brave paths through “dust, mud, water, stone”. Music and singing (Michelangelo Contini, Aaron Snyder, Maja Olenderek) resound from beyond the stage, still filling the space with all their power. As with her past stage pieces – most recently in her solo “Restraint” for Julek Kreutzer – the rhythm, which spreads, abruptly ceases, and reverberates throughout the body, is inescapable…

A frenzied figure, whose face is initially cloaked by a cape, (Diethild Meier), hastily and tenaciously struggles across the floor through golden dust. Bent forward and supported by her forearms, her body twitchingly slumps down over and over only to right itself once again. Driven by an unknown force, she falls over in all directions – flailing arms pave the way. Her dance evolves out of an imperative urge to persist.

“A Passo di Mulo” touches on the topics of migration, flight, transit, parting, and beginnings. It poses the question of what we leave behind and how we lose and find ourselves. What remains is a diffuse vibration in the room and the impression that something important has just occurred.

An oversized sculpture made of multi-layered blankets sits enthroned above the undefined landscape observing the events like a phantom – patron saint of all travelers? Two clay blocks lie abandoned on the floor and are set in motion by invisible strings. It is these snapshots, stations along the way (that knows no arrival), that set the stage for the choreography: heads drooped on shoulders, bodies leaning against one another and spiraling into the landscape together. Their forging ahead is akin to a trap when they circle backwards towards the future on a seemingly predestined path, free themselves from the clutches of the other, and yet remain stuck to one another. Ahead of them that which has already come to be.

Again and again, the dancers contort their bodies, topple over, cross the space in hectic poses, stumble through time oblivious to everyone around them, and pick themselves up again. The dance has happened to them. In the moments when music, song, and dance form one entity, the choreography touches the spheres of ritual, of magic. Perhaps that is why it is difficult to approach “A Passo di Mulo” with language, and almost impossible to approach it with rational categories … It is a rapture – with the future at its back.