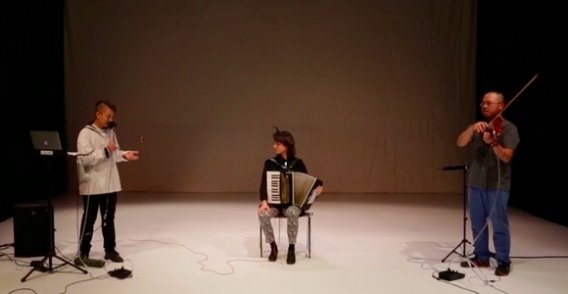 For Tanznacht, Antonia Baehr brings back “Röhrentier”, a work of sound, structure, and spiders, created with and for composers-performers Johnny Chang, Neo Hülcker, and Lucie Vítková.

“Röhrentier,” Baehr writes in the programme, is based on a dream, inspired by the “physical principles of communicating vessels her performers are connected by tubes which “not only make invisible sound waves tangible acoustically, but invest them with thingness.” Visually, we see three performers in one line; black concert attire on a stark white stage. Two have instruments, the third is a Professor, who will tell us what will happen before it happens. Always. Off to the side there sits a sound tech. Between the figures are tubes, one line below, one above, nearly invisible. Professor Thousandtingles will walk us through the subtle and precise states of sound, creating connectivity between the members, and, through their commentary, to the audience. It is a bizarre, observant, and imaginative work that pulses with humour under a serious new music aesthetic. Sasha Amaya sat down with Antonia Baehr to learn more about Röhrentier.

Sasha Amaya: Thanks for agreeing to meet! I was super fascinated and humoured by your piece. Can you tell me a little bit more about how this work started?

Antonia Baehr: This project began two years ago. It started like this: Andrea Neumann and Christian Kesten, organized and curated a festival called Labor Sonor : Moving Music [a platform formed in 2000 by Gregor Hotz, Andrea Neumann, and Steffi Weisman] where they invited choreographers to create for composer-performers [at Ballhaus Ost]. They wanted to have a trio and I said, okay, I trust you, just find me three composer-performers, and they invited Johnny Chang, Neo Hülcker, and Lucie Vítková. I didn’t know the three of them, only Johnny [Chang], a bit. We started the process so that each artist would show their work to the rest: first Johnny showed making coffee in different ways, and a postcard project of theirs. Lucie Vítková and Neo Hülcker had already collaborated as a duo and showed me what they had done and also their solo work. Then I went away and based on this and their desires – what they like to do – I retired and had a dream that they would be connected, inter-tangled through tubes going into the bellies of instruments and going out of them, and in my dream they were big tubes. When you perform music together you connect, but this was dingfest gemacht [determined and formed], when the connection is materialised, made into an object. The dream was so vivid. So I thought to take it as the facts, make that a score, and put it into reality.

Amaya: I was curious as to what role sound plays in your work. Was this something new for you, or a fresh take on something you had worked with or on before?

Baehr: I think I have a lot of friends who are composer-performers. Also, since I work a lot with scores in choreography and for performance, I am very inspired by my colleagues who are musicians who work with scores, too. In the scene in Berlin, there is a lot of [interdisciplinarity], and I go a lot to concerts and have a lot of exchange with my musical colleagues, possibly more than with my choreographer colleagues.

Amaya: Can you tell me more about the character Professor Thousandtingles?

Baehr: Neo [who manifests Professor Thousandtingles] is working with ASMR

[autonomous sensory meridian response, the name for the tingling which
begins on the back of the scalp and follows down the spine and limbs]

, and the internet of practice where people use very fine microphones and make videos in which they talk to the audience, to the viewer, in a whisper because the microphones are so fine. It’s about combing hair, petting cats – some people react with a tingling sensation – so they work a lot inspired with that. They have an ASMR channel. And I think this is interesting, this youtube attitude, “okay now it will be like this and I show you this” and this whisper that comes from technical reasons. So on this channel Neo is this character Thousandtingles. And a character I have is this professor who explains everything that happens… before it happens!

Amaya: This piece has such a new music aesthetic – and a new music feel! I just came back from a new music festival and your piece somehow captured so much of that two week experience in one hour. It really has the sense, feeling, and look of a classical music rehearsal. All the mannerisms were there.

Baehr: I don’t know new music, it is all new to me. Neo is really in the new music scene. I am just observing funny things. Like they always stand in a row like this [points to stage], or how it is dramaturgically set, with one thing following the other, “now it must be like this and like that”, as if it could be no other way, but actually it is quite absurd sometimes. So I guess there is a little comment in there about structure.

Amaya: But I glimpsed a little bit of your rehearsal and you are also super detailed, super precise, and super structured in some ways. Was the process for this work very structured or have things been in flux?

Baehr: The piece changes: it will be different tonight. New ideas. [Laughs] For example, it seemed short yesterday because new music pieces are twenty minutes, and dance pieces are forty minutes. So we’ll do it longer today.

But it is really based on what I got from them, what I saw from their work, and also bringing them together somehow. Lucie’s work – she is playing the accordion and tap dancing – it’s so amazing! The spider comes from Neo’s universe. The hair is from my universe, though, from a long time ago when I had my sister play the cello and attached her hair to the bowstring so that everything would be connected and that nothing would happen without an unconnected reason.

I think all of my pieces are about connections. So this is also here. The relationships between people, between animals and people, between faces (Spiegelungen) – the empty space between two beings, and this one

, too. I think of a poem from Christian Morgenstern “Der Lattenzaun”:

Amaya: Antonia, what are you reading right now?

Baehr: Ahhhh, what a nice question! “A Little Life,” a novel. I read a lot of books at the same time; I like to do that. And I want to read Donna Haraway again.