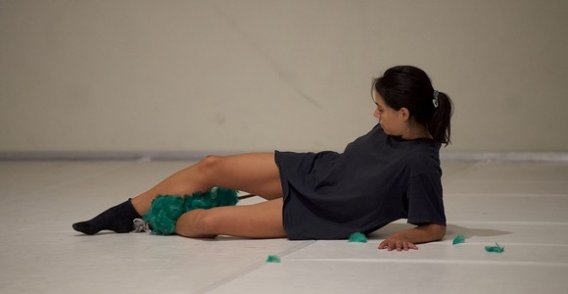 Tanznacht opens its 18th edition, especially jubilantly marked due to the 40th birthday of its part-ner Tanzfabrik. Tanznacht’s mission is always that of celebrating what is made in Berlin, and this year, curated by Silke Bake, the festival consisted of an overlapping schedule full of big names but also many younger artists.

Opening night consisted of six shows, but only one of them with no scheduling competition, namely the one and only Xavier Le Roy, who restages “Untitled” (2014). Nestled together in the heat, we settle in to two bits of information delivered by Le Roy: first, don’t worry, we are running a bit late but the next show won’t start until we finish, and, two, that he has completely lost his memory. Right. But we are all feeling celebratory, kind, and jovial, and so in good spirits we try to help him. What is the last thing you remember? Do you remember your answer to the last ques-tion? Etc. One child suggests that Le Roy might remember if he sits for a long time to remem-ber. He replies that he is a bit shy, laughing, but this is a very nice suggestion, and lets her de-termine the length of time. After a few seconds she says “long enough,” to the chuckle of adults, and Le Roy’s mind remaining blank, the author again drops out of the picture, sort of, and indeed he does such a good job of releasing control, his answers so neutral and so open-minded to silly provocations. And rather than frustration, we enjoy the time together in virtue of it being time together, bringing us thickly into community.

Le Roy decides it is enough for now, and so the lights drop to black, and we wait in the darkness. It’s an odd wait, because we are excited and, having spoken from the spot of our chairs feeling buoyant and daring. After some minutes in the dark, I am tempted to utter some shrill scream in an Agatha Christie meets Tanznacht moment—there’s just too much energy in the room—but I am working, and a law-abiding audience member anyway, and I don’t. Finally, our eyes begin to open up to two grey lumps in the room, one long and heavy like plasticine, the other a soft ball, and, as light breaks in, just a touch, grey and obscure, we sense tumbling forms sifting into one another, the inanimate and animate blurred together seamlessly, confusingly, relaxingly like some Platonic form of contact improvisation. As the light increases, bodies separate, so that one lone figure flails and turns as a dimly lit grey spectre marionetting through space, his master twisting on the floor in an enchanted turning of that dialectic. Lovely, but markedly less enchant-ing than the churning of forms from which it came .

Part three begins: the human form is revealed in its fleshy pinkness, the solid blue pullover, the details of a face. Le Roy’s limbs hinge separately and together, animated differently, having come through the other side of the tunnel, screaming sound. There’s a wonderful mix of mastery and experiment in this work, but I wonder about the importance of three, that mystical number, and if it is really necessary, or if two planes of opposite kinds of enchantment would have been enough, would have been even more.

We applaud and run to the next piece, which has, as promised, waited for us, but just barely. “THE HALF”, creators Igor Dobricic and Diego Gil claim, begins with a cut that “releases the dance from the music and the music from the dance,” which then escalates into a series of cuts by which things—bodies, durations, rhythms, memories—are halved. Four performers—really performer-choreographers whose names are well-known in the local scene: Oihana Altube and Paz Rojo, Tian Rotteveel, Felix Marchand, and Pablo Fontdevila—carry out these tasks, often, but not always, accompanied by a DJ who, allied to the conceptual arc, remixes the sound.

We are led through genres, even some Purcell; it is always interesting to watch movement push through and be differently enveloped by different sounds, but whether this is a revelation into the “affective ecology…made of potential perceptions…offering alternative modes to perceive,” as Diego Gil puts it in the programme note, is not so clear. Noteworthy though, is Pablo Fontdevila, inwardly focused, though without a DJ, whose movements remain circuitously fascinating. In this instance is it perhaps possible for the outside eye to witness ways in which the body halves itself, abbreviates, and regenerates. There are, too, some particularly nice placements of light, one set rigged so as only to flash as if from the outside windows. For the most part, however, these larg-er allegiances between segmented movement and the four individuals to grander themes remain somewhat obscure.

Again, as herd dropping and receiving a few new members, we carry on to a small, quiet, lightly coloured studio to watch Julia Rodriguez. She is sitting as we enter, in the far right corner, in a big dark tee shirt and white sneakers, with her legs splayed open in frog, and, though somehow I barely notice it at first, no underwear on. The softest of lounge music plays in the background. We wait. And then, in closing her legs, though we will only realise it much later, she performs her first vanishing act.

Rodriguez’s work is precise, beautiful, gentle, intentional. We see her place, displace, replace small balls soundlessly on the cream floor; we see her hide objects in the heater, on top of the ledge; we see her hide and reveal her feet within stacked cushions. We watch carefully as a lus-cious forest green feather duster slides up the space between her legs, almost magically—what is hidden? What is revealed? What lies beyond? Twice she breaks the atmosphere with loud, ostensibly European sound, the first time, donning a wig, faced away from us and trilling a tune not unlike Mozart’s childhood melodies; the second time breaking into a buoyant yet serious Scottish-style jig before the piece snaps shut to end. Just before this final burst of sound and song, we get words. Quiet, precise, intentional. What disappears? Objects, funny ways of view-ing things, women. It’s so brief we would almost miss it, evaporating into the air before us. But we don’t. We have been asked to wait, to look, to think, to remember, and, when we do, we are left with a perfectly balanced piece of poetry that is as ephemeral and fragile as it is dark and deeply moving.