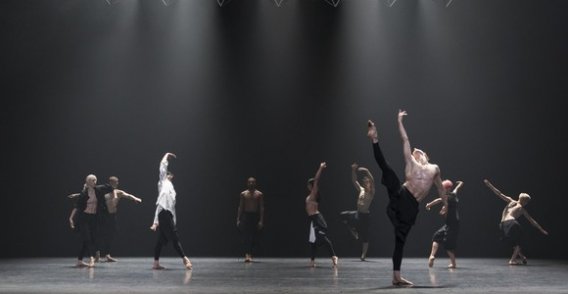 Wayne McGregor brings his virtuosic choreography to Berlin audiences for the first time at the Haus der Berliner Festspiele from August 17th to 19th.

For the 30th anniversary of Tanz im August, Artistic Director Virve Sutinen aims to reach out to new audiences, and, she acknowledges, “°ne cannot reach out for new audiences without revising the programme lines by including different aesthetics, styles and proposals.”* Diversity has been a key feature of this year’s festival, with works by artists at different points in their trajectory, from different locations and working contexts, and with very different ideas about form, content, and the making of art.

One of these artists is Wayne McGregor, who, though totally famous in his own England, makes his Berlin debut. Formerly known as Random Dance, the Company Wayne McGregor is unique in their virtuosic movement research and their trademark angular, spiralling vocabulary. McGregor has also choreographed for some of the world’s biggest ballet companies where he has brought unusual shape and form, loud music, and various colour palettes to big and spectacular, albeit still tailored and contemporary, effect.

For Tanz im August, the company premieres “Autobiography”, the first in a series of work which aims to intercept, and forge dialogue with, concepts in science through choreography. For this venture, McGregor has focused on DNA coding, taking the opportunity to be inspired structurally and thematically. Thematically, the work revolves around 23 scenes (the number of chromosomes in DNA) from life, which include “knowing”, “instinct”, “aging”, and “sleep”, amongst others. Structurally, inspired by Cunningham, McGregor and his team made an algorithm out of his own DNA sequence (wrought by researchers at Utrecht) which then determines the sequence in which the choreographic fragments will be danced: each performance is played out uniquely, including not only the order of scenes, but who is dancing which roles, and even if some sections are done “forward” or “backward”, all rehearsed just two or three days in advance.

To watch such an enterprise is at one impressive, and rather baffling. Though the piece is bookended by the themes “avatar” and “choosing”, we jump between every other section in a way that feels not always exciting but sometimes simply disjointed. Though the very point may be this randomness, a nod to the way our genetic make up combines, choreographically it leaves us excluded from a greater narrative or sense of being. In particular, the trappings of the set – the showy lights, the moving ceiling, the extreme sound, so often all pitched at great intensity – are thick, and seem to make us unnecessarily distant from the theme of life, the human body, and the human experience. What we get instead is massive showmanship, and, as such, remain very far removed from the work, if dazzled.

But dazzled we certainly are, for the dancers themselves are stunning. Though one could wish for more connection, not only between the work and the audience in some way, but also between the dancers, they are all clearly professionals at the top of their physical and mental game; a few individuals in particular stand out not only for their incredible technique but a deeply magnetic presence. Each of the fragments, not least considering in how many different combinations the partnering might be made, is impressive, but there are some moments of male group work and partnering which are not only stunning but also stirring. The respect for this type of excellence must be appreciated. As the dancers twist, spin, and leap on stage, one gets the impression that this work, which appears both an extreme challenge and an exhausting pleasure to embody, is a choreography that is perhaps as equally satisfying to do as to watch. As long-time McGregor company member Jessica Wright explains post-show, the work changes every night in a way that is perhaps not perceivable for the audience but has great impact inside the team: not only are such shifting combinations mentally gripping for those involved, but also allows the emergence of poetic possibilities amongst its members as they meet each other in each performance at difference times, at different stages, sometimes meeting for the first time early and seeing much of each other, at other times meeting someone later in the performance when one is exhausted and the other fresh to the scene—a little theatre of life played out amongst the company bringing chance and meaning to them differently each time.

Having first seen McGregor’s work eight years ago in Edinburgh, where it was an exhilarating and important revelation to me into the ways that balletic and contemporary forms can come together with new media, I am grateful that Tanz im August’s view of dance remains broad enough to include voices which say totally different things. Though the years, and also my time in Germany, have changed what I see, what I look for, and what I might find valuable in dance, what still ultimately makes me appreciative of a festival is real difference, which means not only work from different places and in different styles, but work which begins from and ends in a profoundly different aesthetic and worldview. Company Wayne McGregor exists in a country where art funding is largely driven by identifiable learning outcomes and interdisciplinary work between art and science (and especially art which “explains” science somehow). The relationship between dance and science remains thin, and, like a painting which needs a didactic to be fully appreciated, “Autobiography” is perhaps not McGregor’s strongest work. Yet, it is an experiment, an adventure, and a supreme show of technical excellence, and, as such, it accomplishes its own goals exceedingly well. Indeed, it may not possess everything that the local scene commonly holds as good or important, but it does show a totally different way of seeing and doing things, reminding us that the dance world and the world more broadly are not always on the same page or of the same mind, but can still co-exist and be appreciated, and for that its inclusion is significant.