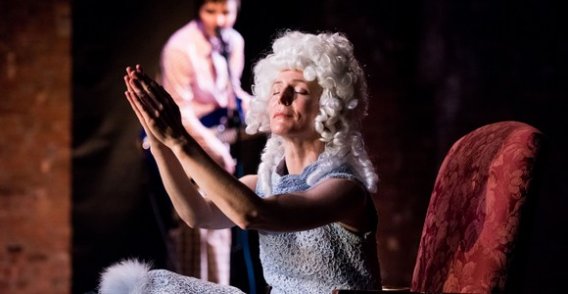 To hear thoughts without censorship is usually a disquieting thing, but whether these thoughts are produced with some sort of apprehension and self-reflection, or a total lack of it, makes a profound difference on the listener. Thus, when faced with the unabridged thoughts of one certain Samuel Pepys – a specimen of the English reformation’s middle class – we are treated to a staged examination of unembarrassed misogyny, rampant philandering, and a total lack of self-control.

Fixing together the charmer and the churl, Big Dance Theater employs its five-person cast and the talent of artistic director Annie-B Parson to focus specifically on two aspects of Pepys’s diaries: dancing, and his general mistreatment of women. His dancing is presented as wonderful if a little bit silly: despite his job as a secretary, clerk, and later parliamentarian, there were periods during which Pepys took daily lessons with his dancing master, a nod to the general dedication to artistic forms, and the importance of art in social-climbing, of the past. But even this has a dark side, for Pepys is troubled by his wife’s daily delight with her own dancing lessons, and, when he stumbles upon his wife not dancing, but so unnecessarily talking, with her dancing master, he quits her lessons and thus obliterates this daily pleasure and edification from her life.

We soon learn that not only do double-standards fester in the sphere of Pepys’s passion for dance, but more broadly throughout his general approach to life, particularly as concerns women and their treatment. While he feels weakly regretful when he cheats on, lies to, and strikes his wife Bess, the concern springs at least half as much from the woe he knows it will cause him as any real empathy toward her. He hopes he can distract and appease her with a new bonnet, new lace, new curtains, and, in very bad scenarios, a new gown.

Scenes from Pepys life are collaged together with the glue of hyperbole, song, and video, a loud and abrupt style which is specifically and pleasurably American. Equally so are the fast-talking interjections from two Youtubers on the side, which punctuate the work with quippy banter about what is and is not Jacobian, the rules of foreign pronunciation, and the merits and flaws of Samuel Pepys. As such, they not only provide some context, but more importantly a searing criticism of academic and literary cultures which not only respects the work of, but more problematically valorises and protects questionable figures, dead or alive.

The real strength of this show is its seamless sliding between past and present. At one point, after reading a passage from Pepys’s diary and his interactions with others, so abusive and yet recorded as totally normal, one performer simply states « The past is sad. » While this may be true, the present is also troublesome, and toward the end of the work we see, with impact, Samuel Pepys peel away to become an everyday guy who charmingly tells us his stories of unchecked lewdness near the fire before transforming again to become a veritable Larry David pawing his way perniciously through the office. As such, we are given a firm picture not of a series of unrelated incidents or anomalies, but of a series, nay, a genealogy, of misogyny and power relations.
The dancing in “17c” is, if we are frank, fairly minimal, and, as I exit the Deutsches Theater, I hear omments about how the text was too fast and the lack of subtitling. Theater across cultures is always tricky, but for those for whom there was a way into the piece, the in-the-flesh genealogy of systemic sexism “17c” offers, not least in a spectacular show of lighting, set design, projection, and humour, leaves an indelible mark.