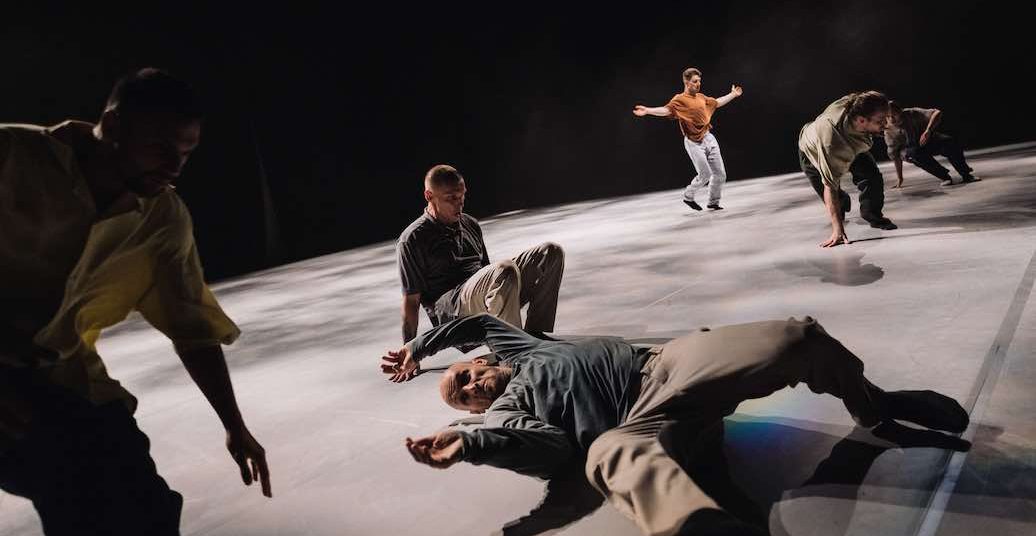 TANZPLATTFORM 2022 >>> “PACK” by Miller / de’Nobili, presented as part of Tanzplattform on 19 March 2022 at HAU2, showcases the virtuosity of its performers, and plays with group dynamics on multiple levels.

Unfortunately, illness among the cast led Miller / de’Nobili to present a shorter version of their piece, “PACK”, at half an hour long, and with four dancers instead of the original six. This text is therefore written with the acknowledgement that the work seen was a limited version of the artists’ original intention.

In Lord of the Flies, the novel by William Golding, a plane carrying a group of schoolboys crashes into a desert island and they must fend for themselves, attempting to organise their own micro-society. Ultimately, it is an allegorical work about civilisation, mob mentality and, in my opinion at least, masculinity. It comes to mind as “PACK” opens, and Egon Gerber, Anton Schalnich, Philip Lehmann and Nam Tran Xuan begin to circle the space. They approach each other, attempting greetings. Each handshake, hug, or kiss on the cheek must be negotiated as though it were being done for the first time. They appear to be testing each other’s limits, and their own, trying to establish the rules of this space in which they have found themselves. Sometimes they interact with warmth, sometimes with aggression. Trios cluster together, leaving one dancer as an outcast, or they drift in and out of synchronised duets. Certain meetings send them spinning out into phrases of acrobatic choreography. So far, a fairly straightforward dissection of the various dynamics which emerge when groups of people form, shot through with impressive, athletic movement.

As the piece continues, the focus seems to be placed more and more on the performers’ displays of bravura. They break out into twitchy solos or come together in precise unison, all the while impressing with their technical ability. Suddenly, however, the stage is flooded with cold light and, standing one behind the other, the dancers look directly at us. Schalnich says, “If you want to belong to us, you have to have a Schleimbeutelentzündung”, and the group scatters before reforming again into a line. There then follows an entire list of entry requirements if you want to ‘belong to them’ – you don’t dance in a theatre, you have a six pack, you have a b-boy attitude… In a sharp switch in tone, it is clearly tongue in cheek (as becomes clear, one of the dancers very much does not have a six pack) and undermines the apparent earnestness of the previous act. It seems an effective way of questioning why we feel like we belong, or do not belong, in certain groups. I also wonder if they are poking fun at assumptions we as an audience may have made about them, casting a more nuanced light on what came before. Was the previous representation of masculinity, which I had read as a fairly standard one, in fact laid out so that it could be called into question? And is the group in the auditorium being examined as much as the one on stage? The ‘pack’, until that point an insular one, turns outwards and, with humour, breaks the façade that any group is truly unified or homogeneous, or can be easily defined from the outside.

“PACK” is undoubtedly impressive, in no small part due to the talent of its dancers. However, alongside the pyrotechnics, it also raises some interesting questions. Hopefully Miller / de’Nobili will have the chance to present a full version of the work in Berlin in the near future.

“PACK” by Miller / de´Nobili is one of the 13 current and remarkable positions of dance and choreographic creation selected for Tanzplattform Deutschland 2022 in Berlin (16 to 20 March 2022, hosted by HAU Hebbel am Ufer).