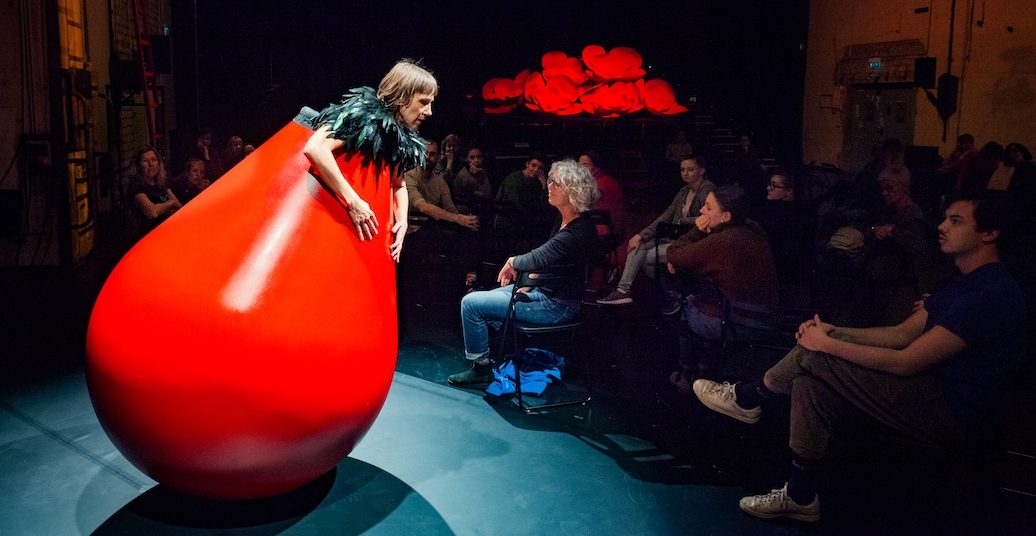 TANZPLATTFORM 2022 >>> At Radialsystem, Antje Pfundtner in Gesellschaft performed the solo “Sitzen ist eine gute Idee (“Sitting is a good idea”) on 16 and 17 March. These two texts were written as part of a two-day tanzschreiber writing workshop during Tanzplattform 2022 and under the direction of Mareike Theile, Johanna Withelm, and Alex Hennig. Inspired by a passion for writing and an exchange about dance and dance critique, the authors had an opportunity to challenge and expand their own writing practice. Texts: Heike Brunner, Doreen Markert.

Antje Pfundtner in Gesellschaft suggests: “Sitzen ist eine gute Idee” (“Sitting is a good idea”). Tanzplattform 2022 at Radialsystem was an opportunity to take a seat

The scraping of scattered folding chairs in the space and actors doubling as ushers in the hall, extending an invitation to join small roundtables, open the space and the dance theater piece with the question: What do you stand up for? Liberty, says one of the ushers, since freedom has constantly been a personal topic for her and her family and given occasion to stand up. My neighboring audience-goer would like to stand up for feminism, another for work and family, me for coffee. Antje Pfundtner begins the evening with friendly confusion and direct communication. A night on the topic of melancholy. The stage is the space, the audience part of the set, sometimes directly interacting, sometimes relegated to their seat, sometimes kindly robbed of it.

The composition of the spatial imagery is inspired by Albrecht Dürer’s copper engraving: Melancholia I. It is this work, which is often controversially interpreted. Because, for example, Dürer’s Melancholia I does not look lackluster, but has a twinkle in her eye, and he painted her with a balled up fist, all untypical melancholic characteristics. The first gesture is one that appears again and again in Antje Pfundtner’s movements. More actively stretched out to the heavens than resting in her lap when the question turns to standing up or revolting, when she talks about all the things she would stand up for. The artist sumberges the viewers in antagonistic forces in each individual scene, guides them through metaphorically grotesque images, she transforms herself from God to cloud by donning her cloudy white prop either on her head or under her chin, she captivates with the humor of subtle observation. The ladder in the copper engraving takes on a new function for Antje Pfundtner. She sits elevated on a fiery-red equivalent and declares that she is a dog trainer. Incidentally, the dog in Dürer’s image is fast asleep. From up above, she recites the perspectives of standing up/staying seated in terms of “real fans always stand up” or “I stand up because otherwise no one else will”. Her spoken theater arts, which fluoresce between poetry, quotes, and pontifications that are not always “human” but are themselves buzzed out as if from a fly or gurgled, remaining intelligible, spark laughter and tears. She dances Melancholia in various impulses and styles, from riot and resistance, rebellious and militant to submissive and weary phases. Voice and dance interweave in a staccato clang in the “The spot on my left is free” scene. Shouting the words faster and faster into the room while beating rhythmically on the spot as if possessed. This is one of the most powerfully eloquent moments. The words sometimes envelop the viewers in the space, immediately breaking up like clouds to occasionally reveal light after the rain. Density and space mount simultaneously, apparently in despair over remaining seated, over the chairs that remain vacant because someone is missing. Finally, the artist perfumes the people with notes of heart and piano , enchanting us with the variety of her movements and a precision that intentionally crosses over into the tragicomic.

I want to see more of this kind of “nonsense”. Another word, (stop the nonsense), which she skillfully intones, dances, and interprets. Let it rain blossoms for this versatile and evocative artist who, at the end, departs almost surreally like an endlessly wobbling Weeble and continues to count the years of melancholy existence.

Where is this going?

At Radialsystem, Antje Pfundtner in Gesellschaft perform the solo “Sitzen ist eine gute Idee” (“Sitting is a good idea”) (Dance: Antje Pfundtner). “What do you stand up for?” is the opening question to the viewers. The insurrection is incited.

I’ll get right to it: SHE had me sitting on the edge of my seat the entire evening. 90 minutes in a completely uncomfortable position, which I only first noticed towards the end of the performance. I’m sitting crossways on a folding chair, only using a portion of the already small seating surface. Upper body twisted to support myself with my right arm on the seatback. Weight mostly on the edge of the chair, at the very front.

At the start, we’re encouraged to ask these questions. Discussions arise in small groups. We’re sitting every which way in the space on black folding chairs. Some people are still looking for a chair. There are enough for everyone. We’ve come to sit.

I notice a huge, red insect eye staring at me from the ceiling. What does this eye see?

SHE – gleaming red leggings, black shirt – dashes through the space, elbows her way through, rearranges the chairs. Sits, stands up, sits. The viewers move out of the way, pack their things, relocate.

“Light a fire under someone”, this expression comes to mind.

“On pins and needles”, another expression that enters my thoughts.

And that is the effect this evening has on me. It jolts me. I sit on pins and needles, my suitcases packed. I’m ready to leave – always ready to stand up. One scene chases the other.

“What no one knows: where is it all headed?”

“The spot on my left is free”. Again and again, SHE pounds on the adjacent chair. It is the only red chair in the space. The pounding gets ever more intense, causing the chair to bounce around in a circle. But no one comes.

A cheer for nonsense follows (or was it beforehand?).

The words become sounds. SHE becomes speech. These sequences occur several times during the evening. Words flow forth from her, transform in their repetition, melt, reform, resound without meaning. Her movements adapt to the sounds. Speech is body is language is speech. In the midst of the ringing nonsense, the meaning suddenly reappears. SHE is playing with language, stripping it of all its power, SHE is literal, makes us laugh with wordplay.

Where is it all headed?

SIE goes through a sort to-do-list – scenes from the piece. Places one check mark after another. “I said sorry…I went potty… the flower, the flower, I haven’t done the flower yet. David, the flower please!” An oversized paper flower falls down next to me on the floor. “Ok, now we’ve done that, too.”

SHE exposes the production, SHE labels the restlessness. Then SHE jumps off the chair the next moment. Driven. Driven by what?

“I stand up because otherwise no one else here will.”

SHE stands up. Red.

“The history of the chair is one of misunderstandings.”

SHE wants me to stand up

SHE wants to remain seated.

SHE does not want to remain seated.

SHE will not stop.

One of the most poignant moments for me is when SHE suddenly stops. In the midst of these fireworks of pressing presence, these cascades of words, this turbulent and at times angry force, there is a moment when SHE suddenly sits still.

Where is it all headed?

When I close my eyes, I see glowing red spirals that wildly circle within and around one another. Until they abruptly stop. Sparks fly. A talking old cloud comes into the picture, a delicately perfumed bowtie on its shoulder. The scent of melancholy. It dissipates in a white mist. “Against disappearing” remains written in the air.

“I won’t stop”. That is her last sentence. SHE tells him, while SHE wobbles back and forth in a giant “Weeble”. Sad irony? Or a glimmer of hope?

And once again a few viewers move their chairs out of the way. Stand up…

“It’s now or never….”. I almost forgot that Elvis sang.

The Berlin premiere of „Sitzen ist eine gute Idee“ by Antje Pfundtner in Gesellschaft was shown in the frame of Tanzplattform 2022 on 16 & 17 March by HAU Hebbel am Ufer at Radialsystem.