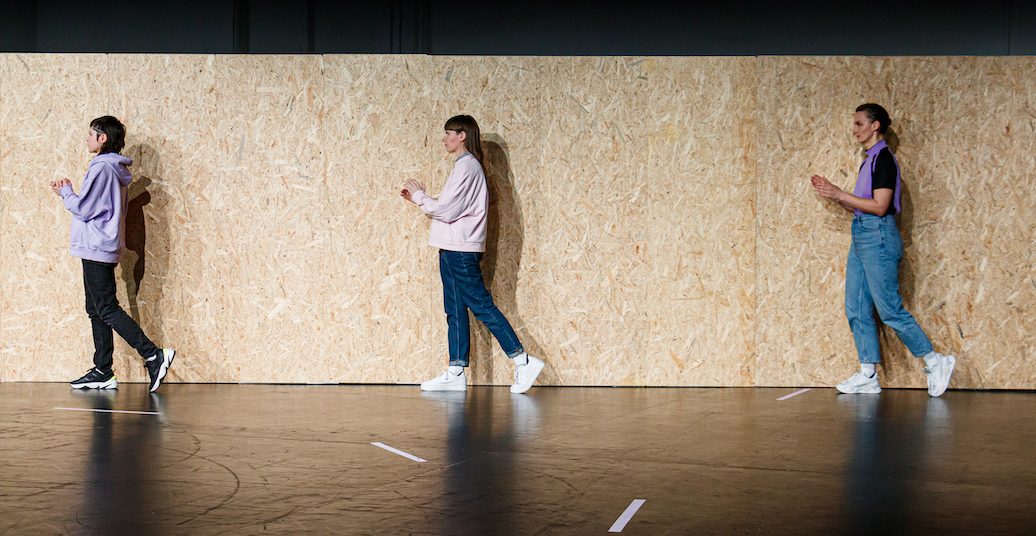 TANZPLATTFORM 2022 >>> Having premiered in 2020, “Flush” by Sheena McGrandles was shown as part of Tanzplattform 2022 on 16 and 17 March, and takes video-editing techniques as an inspiration. Movement and speech become material to be cut up, folded, manipulated and stitched back together, to form an absurdist patchwork.

Scroll down to read a second text on Sheena McGrandles’ “Flush”, written as part of the two-day tanzschreiber writing workshop during Tanzplattform 2022 led by Mareike Theile, Johanna Withelm, and Alex Hennig.

The stage at Sophiensaele has been stripped bare – a large chipboard wall stands on the diagonal, with conspicuous markings of white tape on the floor in front of it. It looks like a rehearsal room, an everyday space stubbornly resisting the urge to put on a show. McGrandles, Annegret Schalke and Ewa Dziarnowska emerge from behind the wall, walking slowly in unison. They perform a clap, a sneeze, or a fall, with each of them pausing at a different stage of the movement. The actions themselves are common enough, but the artificial freeze frames and pregnant pauses invite us to look at them afresh.

It turns out that the chipboard wall is made of five segments, which are pulled apart and repositioned, restructuring the space. The performers edit their actions and words, accelerating, reversing and slowing them down, or getting stuck in boomerang loops. It is most successful when the text or movement is so stretched out, or arbitrarily carved up, that the original intention becomes invisible, or irrelevant. At one point, Schalke sits on an upturned chipboard segment wailing along to the music, morphing between different postures, while McGrandles and Dziarnowska roll together on the floor, locked in something between an embrace and a wrestling grip. The absurdity cracks open, I glimpse a certain inexplicable humanity, and it is captivating. There are also minutely subtle moments, such as a hand going to touch a shoulder but then pulling back, repeating again and again, into which a thousand things can be read. However, there are also long periods where the material remains recognisable, playing with cliché even, as theatrical laughter, pain, or pleasure are performed in super slow motion. At these moments, I find it hard to see past the purely technical manipulation of the movement.

Stellan Veloce’s fun, synth-y sound design often serves as a rhythmical base for the performers’ disjointed movement. Dziarnowska tells a corny joke, one syllable per beat, before bursting out into staccato laughter, and McGrandles explains this by saying, ‘She’s a performer’. And in fact, all three of them are – they clown for us, gurning and lip-syncing, almost always turned towards their audience, playing for the (many) laughs. Video editing techniques, especially online, are often used to manipulate the body into promoting or selling something, including itself, and I wonder if I can find something in this work about the performative, capitalised body. Yet what exactly remains elusive.

“Flush” in part draws inspiration from Gertrude Stein’s description of her plays as ‘landscapes’, which favour repetition and abstraction over linear narrative. (It also brings to my mind the cut-up technique, popularised by William S. Burroughs, where cut-out sentences are recontextualised to invest them with new, more surreal meanings). Historically, dance has a noticeably different relationship to meaning and abstraction compared with literature or theatre – there has often been more space in dance for the surreal and the non-linear. So it then becomes interesting to consider: what happens when logic-disrupting principles are applied to an inherently illogical art form? Does it free the work from old constraints, or impose new ones? And am I perhaps more attached to meaning than I thought I was? Somehow, despite the work’s technical skill and charismatic performers, I struggle to connect with it – though I think I am in the minority.

The following text was written as part of a two-day tanzschreiber writing workshop during Tanzplattform 2022 and under the direction of Mareike Theile, Johanna Withelm, and Alex Hennig. Inspired by a passion for writing and an exchange about dance and dance critique, the authors had an opportunity to challenge and expand their own writing practice.

Nostalgia for the Everyday

The performance “Flush“ by Sheena McGrandles, presented as part of the Tanzplattform 2022, resembles a rhythmic play between pauses, slow motion, and fast forward and reveals what is quickly forgotten in everyday life.

In “Flush“ three performers, Sheena McGrandles, Annegret Schalke, and Ewa Dziarnowska, are stuck in a time loop, which they tie in knots, open up, close again, and unknot during the performance, only to roll it up again. In so doing, they create a performance that adheres to the aesthetics of videos.

Their work with pacing, standstill, slow motion, and fast-forwarded motions render visible what is otherwise invisible or hardly noticeable. Everyday movements, communicative gestures, and, in particular, facial expressions, which, when presented in this fashion, become comical and also create a nostalgia for the everyday. These fragmented everyday realities are relayed as episodes. Breaks and repetitions create a rhythm all its own, which create a “Flush” soundtrack along with the music. The three performers converge in front of a particle board wall, which is opened later on in the performance, offering space and framing for the choreography. The narratives unfold between break, slow motion, and fast forward while the performers move between, behind, and on the five particle board walls, simultaneously creating dramatic moments of sensory experiences that continuously drift off into absurd comedy. In a balancing act between the Netflix aesthetic and the style of old VHS movies from the 80s and 90s, the narrative pattern switches erratically, exposing interpersonal actions in the process and faithfully staging them as a melodrama. As a genre, melodrama allows for an interdisciplinary confrontation between music, text, and dance, which ultimately breaks down on the emotional level.

I catch myself jumping around in thoughts: to my parent’s old VHS movies where I can be seen as a child collecting sweets at a (long no longer celebrated) German fair while my mother translates events in Russian for my grandmother who will later receive the video. Then the particle board wall pops back into my line of vision and I think about the Berlin Wall and how I was born shortly after the fall of the Wall. And then my feelings and memories reel me in. Be it fear of the future, feelings of nostalgia for my childhood, the joy of once again being able to sit in a fully-occupied theater.

The protagonists in “Flush“ are simultaneously victims and heroes of life . They flounder and despair over it, or they enjoy moments of joy, success, love. How quickly we forget these moments and have wanted to be able to relive some of them once again. “FLUSH“ tells a neverending story, like a video in an infinite loop.

“Flush” by Sheena McGrandles was shown as part of Tanzplattform 2022 at Sophiensaele on 16 and 17 March.