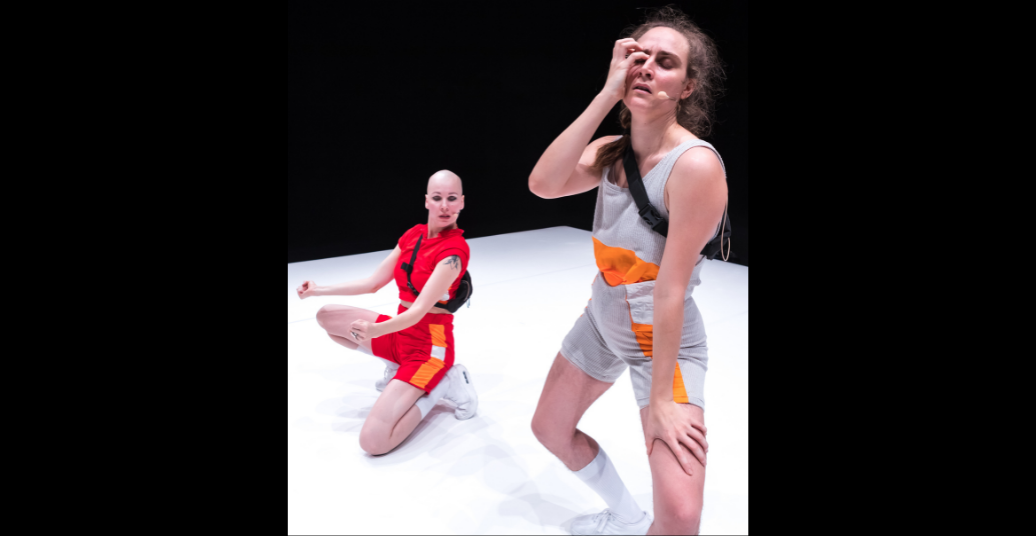 TANZPLATTFORM 2022 >>> In “SHE LEGEND”, Carolin Jüngst and Lisa Rykena appropriate the archetypical narrative of the masculine superhero cosmos and reinterpret it from a queer-feminist perspective. The restaging of the 2019 premiere performance takes place on 16, 17, and 18 March as part of Tanzplattform (Dance Platform) 2022 at HAU3.

A whooshing sound emanates from the loudspeakers. Sirens whistle, robotic bird chirping resounds, and there’s a beeping sound (music & sound design: Konstantin Bessonov). Carolin Jüngst (she/they) and Lisa Rykena (she/her) are reposing on the rim of a white square, which is laid out flat as a dance marley (staging: Lea Kissing). Hanging behind them from the ceiling, with its tip pointing downwards, is a large triangle with glaring red edges akin to a warning signal. It reminds me of the insignia of superhero(in)es, which is emblazoned across their chests as a hallmark. Jüngst and Rykena are wearing gray and neon-red workout shorts and bomber jackets with a marble pattern (costumes: Hanna Scherwinski). They start moving around the white square. At the same time, they stride forward, their hands in their jacket pockets, seemingly imitating the gait of a bird. Their movements are accompanied by loud sounds that lend a comic quality to their steps. As soon as they get close to the white floor or hover their hands above it, they appear electrified. The electric charge seems to make Carolin Jüngst’s long braid stand on end for a brief moment. Shortly thereafter, the two become braver, jumping around the square, throwing their jackets on the floor, taking running leaps using a white-cloaked trampoline, first teetering and then jumping into the white square.

In the next scenes, during which it is not initially obvious whether they are fighting against or with each other, their expressive movements blend with comic sounds, sometimes from the loudspeakers, sometimes as onomatopoeia and song from their own mouths, and sometimes with blockbuster film music. They once again find themselves in a situation where they have to save a troubled world. During their entire battle against an undefined opponent, they tear out one another’s hearts and transplant them to other body parts. It throbs in a knee, a face, a hand, in an entire body. Now and then it gets dark and the radiant triangle spins faster and faster, light reflections form bright storm clouds on the surface. Thunder booms and rain falls (light design: Ricarda Schnoor & Joanna Ossilinska). Jüngst and Rykena fall to the ground. Doomed to pursue a never-ending mission, they reawaken in a slimy environment following successful battles. The performance ends with an abrupt scream: “Fuck!” (dramaturgy: Helen Schröder). However, the battle continues.

The classification of the onstage events in a queer-feminist context becomes evident from a small booklet placed on the audience seats. In the brief introduction, Lisa Rykena and Carolin Jüngst explain their intention of teasing out the queer potential of the comic world by distorting the masculine hero narratives. The booklet includes comic sketches and illustrations by Jul Gordon, Larissa Bertanasco, and marialuisa.

In hero epics of Ancient and Middle Age mythology, it is generally idealized, archetypical men slaying the dragon or being close to godlike with their supernatural abilities. Even the muscular Marvel and DC Comics superheroes, including Superman, Spiderman, Batman, and the Hulk, are always ready to save the world – and often a woman – from the villain using their superpowers. In countless science fiction blockbusters hybrid beings, half-human half-cyborg, save the world, and a woman, from space invaders thanks to their powerful extensions. Heroines like Brunhild from the Nibelung Saga and the huntress Diana are ascribed attributes like virginity, which are conveyed as desirable in patriarchal societies. Similarly, Elektra, Catwoman, and Wonder Woman emerge as skintight clad superheroines and futuristic Amazonians or as villainesses of the sexualized fantasies of their male creators. They are often depicted with whips or in submissive bondage scenes where they, at least Wonder Woman, lose their superpowers.

It is this hunk of epic, violent, and sexist narratives that queer feminist fighters Carolin Jüngst and Lisa Rykena take on. Through collective gestures of (at)tempting, imitation, reconstruction, and new beginnings, and also with humor, they manage to demystify male heroism and the sexualized representations of female literary fighters. In their sheer unending struggle, they save the world – possibly from the villain called patriarchy, which has been wreaking havoc for millennia with his toxic tentacles. Possibly also from binary categorizations of good and evil, hero and villain, man and woman – as a potential response to Donna Haraway’s Cyborg Manifesto, which calls for the reconstruction of identity and relationship concepts.

“SHE LEGEND” by Carolin Jüngst and Lisa Rykena is shown on 16, 17 and 18 March 2022 at HAU3 in the frame of Tanzplattform Deutschland 2022. Check out SHE LEGEND – The comic to the performance.