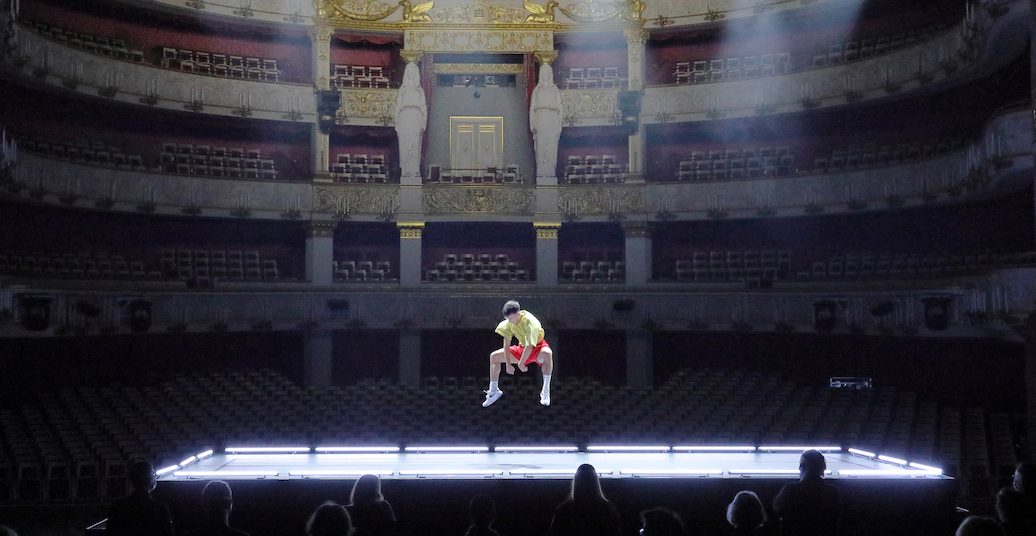 TANZPLATTFORM 2022 >>> Moritz Ostruschnajak’s “TANZANWEISUNGEN (It won’t be like this forever)” was the opening performance of Tanzplattform Deutschland 2022, hosted in Berlin for the first time since its launch 28 years ago. The Deutsches Theater served as the venue for this occasion, showing the work on 16 and 17 March 2022.

The duration of the performance was set at 30 minutes. My experience of it, however, began much earlier that evening. “TANZANWEISUNGEN (It won’t be like this forever)” by choreographer Moritz Ostruschnjak was showing at the opening evening of Tanzplattform Deutschland 2022. Choreographers, programmers, arts administrators, producers, and cultural journalists were milling about in the aisles. The air buzzed with excitement as friends and colleagues from Germany’s contemporary dance industry came together after two profoundly unique pandemic years. There were excited squeals of “hiiii” and dignified hellos. There were hands bristling with tension as they found ways to express themselves without hugging, and necks restraining themselves from leaning into air-kisses — the event proceeded under COVID-19 restrictions. A band was performing on stage, around the chatter. From my balcony seat under the grand chandelier of the Deutsches Theater in Berlin, I watched this scene of amiability play out among Germany’s dance elite.

The evening formally began when the band ended their performance with a rendition of John Lennon and Yoko Ono’s ‘Give Peace a Chance’. With this toast to peace, the programme was opened by remarkable speeches by two influential women in the cultural field. According to the Tanzplattform brochure, one was a political greeting and another a non-political one. Each of their speeches highlighted the resilience of performance makers in Germany who had created profusely and innovatively despite the COVID-19 pandemic. This admiration of resilience was continued with a reference to the war in Ukraine. My reading of the speeches was that both events — the pandemic and the Russia-Ukraine war — were thought to have led to a common experience and emotions among the dance community. One of the speeches also claimed that something had fundamentally shifted since 24 February 2022 — the day of the first Russian incursions into Ukraine. I pondered this alleged feeling of fundamental change for a moment, wondering if all those shudders in other parts of the world had not been felt here in the same way at all.

It was with this frame of mind that I entered the performance of “TANZANWEISUNGEN (It won’t be like this forever)” which began shortly after. Dancer Daniel Conant took his position centre stage, and, after a dramatic pause, began to create variations on rhythmic beats by stamping his feet, clapping his hands, and tapping his thighs and knees. The performance notes state that this is called Schuhplatter, a form of folk-dance from the Eastern Alpine region. Over the next few minutes, the pace of Conant’s beats gradually quickened, creating a hypnotising rhythmic pattern. Just as I noticed his laboured breathing, a person holding up a board crossed across the stage. ‘NEWS: It won’t be like this forever,’ the board read, eliciting laughter from the audience. This claim from a mere hand-scribbled board put me at ease. I wanted to believe it, that this — this situation here on stage of a body tiring itself for my entertainment and the ongoing war reported in the news — would not prolong forever.

Photos: Daniel Conant in “TANZANWEISUNGEN (It won’t be like this forever)” by Moritz Ostruschnjak ©Wilfried Hösel

Conant continued to dance as if he were a wind-up toy propelled by automatic gears. He switched to movements from other dance styles such as the shuffle and the waltz. His movements were somehow mechanical, their quality remaining unchanged even as he transitioned from one dance form to another. It appeared to me as though he was being led by another force that preceded his personal will to move. Perhaps he was merely following a set of Tanzanweisungen — dance instructions? But who was giving him these instructions?

While I made these observations, I stopped noticing the energy Conant was visibly putting into these movements. In this moment, sure enough, the news guy (Moritz Ostruschnjak) went by with a board stating just that — ‘NEWS: After a while we will stop thinking about it.’ Had I stopped thinking about it already? Had I really forgotten about Palestine, Sudan, Iraq, Afghanistan, Syria, and Kashmir? Could I ever forget about them?

On stage, Conant was continuing to bend himself into various movements from across the dance canon. I noticed some movements that looked like Tai Chi alongside imitations of balletic poses. There may have been a segment from a Pina Bausch work and another Gaga-style run across the floor. The automated quality of his movements seemed to imply a kind of ironic commentary on the canon, which led to laughter among some members of the audience. Sometimes, when I understood or recognised something, I laughed along. Mostly, I did not laugh.

Taken in the context of the Tanzplattform 2022, I wondered who the intended audience of Ostruschnjak’s performance was. Did it make a difference if the gathered audience was part of an ‘in- group’ that was familiar with the dance canon or not? Was that integral to communicating irony and humour? Was a sense of resonance established through creating a feeling of similarity among the audience members — that they had something in common which helped them understand the same ideas? Was this the same sense of similarity that also created empathy and care specifically for the Ukrainian refugees seen in the news?

“TANZANWEISUNGEN (It won’t be like this forever)” by Moritz Ostruschnajak was shown at the Official Opening of Tanzplattform 2022 at the Deutsches Theater. HAU Hebbel am Ufer is the host of Tanzplattform Deutschland 2022. From 16 to 20 March, the festival in Berlin brings together 13 current and remarkable positions of dance and choreographic creation. The entire festival program with performance dates, venues and ticket information can be found at tanzplattform2022.de.