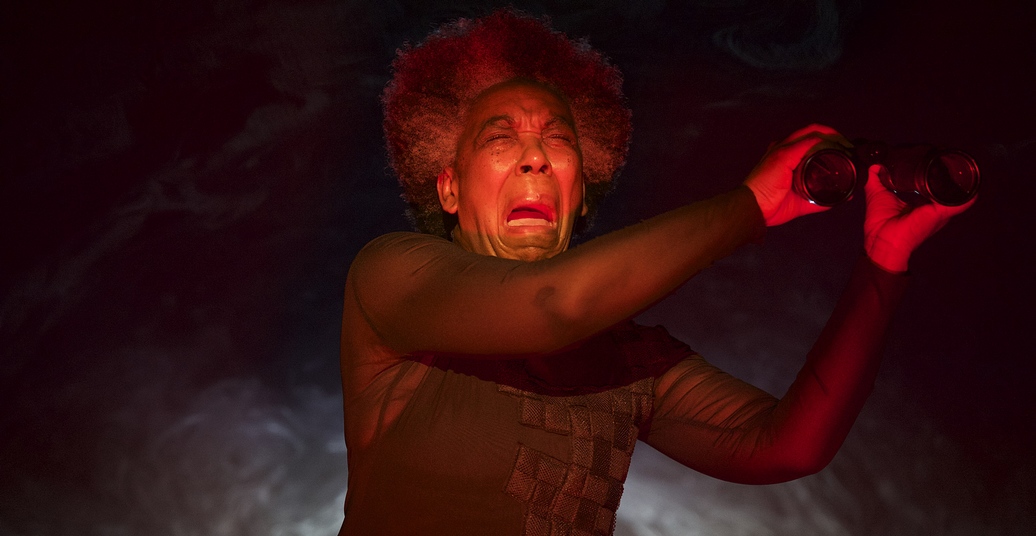 As the #darkred trend on TikTok with its romantic autumnal videos featuring pumpkin-flavored drinks from Starbucks, hoodies, and Pinterest wallpapers comes to an end, Brazilian choreographer Clébio Oliveira’s new piece, which carries the same title, is concerned with much more existential developments. “DARK RED” is his second work, following “koerper.welle” (2021), devoted to a “psycho-physical chronicle of the pandemic” from the perspective of the Brazilian diaspora. The COVID-19 pandemic struck Oliveira’s country of origin with greater force than nearly any other: it boasts the second-highest death count in the world, a result of President Jair Bolsonaro’s disastrous policies. The final week before the run-off election that will determine whether the nation will be able to turn back to democracy after four years of fascism is now beginning. At the moment, the future looks more grim than promising.

“DARK RED” was created in collaboration with dancer Zula Lemes, whose radiant aura could probably fill a theatre of any size—so it feels like a privilege to see her perform on the Acker Stadt Palast’s relatively small stage. Other than a black projector and an upright, open-faced box, also black, standing upstage right like a fortification of the corner, the space is completely empty: a literal black box. Zuma Lemes, too, is completely dressed in black (costumes: Atelier Liyanova Migliorati). Multiple pieces of clothing layered over one another create a mystical pattern made up of different shades of black. She seems like a visitor from another time.

The piece begins in complete darkness. As the lights gradually come up, we see first just the edges of Lemes’ silhouette, until after a while her face becomes visible. Her eyes are hidden behind binoculars, through which, judging by her facial expressions, she is watching a horrible scene. Surrounded by a cone of fog and light that extends out to the audience and seems like a continuation of her gaze through the binoculars, she doesn’t move at first. In sync with the light, a tapestry of electronic sound inexorably unfolds throughout the space; to its penetrating tones, Lemes’ body soon lapses into helpless convulsions. Now and then she lowers the binoculars, briefly revealing her wide-open eyes. Suddenly, she lets loose a loud, pain-filled scream that seems to mobilize her body and voice at once: her left foot in a clog, she hobbles around the stage, turns in circles, and convulses over and over again as if possessed. All the while she murmurs, speaks, growls, and sings strings of words in Portuguese which are for me incomprehensible but which I take to be litanies of grief. For me, “DARK RED” is laced with a fundamental opacity that at the same time perhaps characterizes every individual grieving process: loss’s existential shocks can throw the usual coherence in most people’s behavior so far out of balance that the unaffected are often no longer able to understand it.

Less than half of the hour-long performance is over before Lemes reaches the corner—and stays there until the end. From now on the audience sees primarily her back, her wildly gesturing hands, her fingers that move nervously to the rhythm of the music as if with a life of their own. Over and over she rotates, like a clockwork toy, around her own axis, and as she seems with each turn to lose more of her own agency, the beams of light dissecting the space and the relentless onslaught of noise become the forces that determine what happens (light design: Mirella Brandi, music: Matresanch). The dancing body increasingly becomes a plaything for external forces, so that before long “DARK RED” is no longer a solo, but an unequal, multimedia trio, a demonstrative exhibition of the powerlessness of an isolated body whose resilience has long been broken. At some point, in the dead end of the corner, Lemes collapses to the floor. The performance ends as it began: in complete darkness, literally and figuratively without prospects.

In his recent book Performing Mourning, dramaturg Guy Cools writes about the importance of witnessing grieving processes. Mourning, he argues, must be understand as a genuinely collective act—only through the presence of others does it become possible for mourning to lead to healing. For many, this encompasses the specific experience of grief in the pandemic: the inability to gather on the occasion of death also gave rise to an inability to properly mourn. Against this backdrop, “DARK RED” can be understood as a mourning ceremony, witnessed by the audience, in which the roots of dance and performance art in ritual—still powerful today—come to light.

The dance performance “DARK RED” by Clébio Oliveira with Zula Lemes can be seen at the Acker Stadt Palast from 20-23 October 2022. Tickets are available at ackerstadtpalast.de.