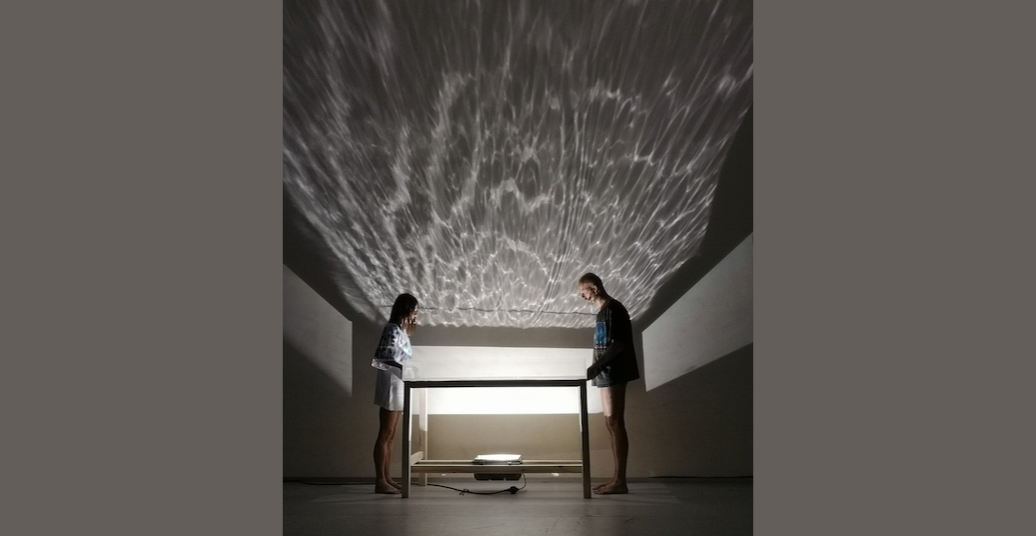 Travel is a heavy site of performative manipulation today. Increased access to travel has rendered the world a playground, and escaping the humdrum problems of everyday life are always a few clicks away – at least for those with the means. Travel has simultaneously become a site of perpetual performance – of an economy or identity’s dominance over another, often in a specific type of global stage, often played out superficially for an invisible army of followers on social media.

Choreographer/performer Christina Ciupke and visual artist, filmmaker and choreographer Darko Dragičević’s “Take me somewhere nice” isn’t exactly an interrogation of the concept of travel, as much as a deep contemplation of its essential – possibly forgotten – properties. After entering a dreamy array of lights and pools of projections (light design: Martin Beeretz), the performance begins with the movement of water from side to side, its languid rhythm mimicking waves (or more metaphorically, perhaps a metronome or ticking clock). Time – a theme returned to by the artists throughout the performance – has a central place here as defining feature of travel, a choice of displacement that shifts the perception of reality.

Slowly, the splish-splash of the agitated water folds into recordings of wave sounds (sound design: Vera Pulido), an asynchronous bounce-effect that creates an immersive atmosphere of exponentially-expanding space. The artists move into the centre area of the space, occupying relaxed poses that are carefully-placed in the performance situation, before Dragičević tells a story of a visit to a volcano, replete with references to both time and water. Lines such as “the time flows so smoothly on this island”, and “from time to time, my perception changed” mix – perhaps clashing – with the sensory experience of the body, and realising the metaphorical premise of the opening.

The performance progresses into an elucidation of a deep exchange or dialogue, as the artists occupy different positions in the stage, becoming more personal, and eventually even premised with “Dear Christina” and “Dear Darko”. The exchange continues into a sort of old-school ‘family holiday photos’ night, where two projectors display (asynchronously) some slices of travel, sometimes accompanying the stories, and sometimes with a complimentary soundtrack (for example, a view from a train as it leaves a station). The narratives at times almost compete and complicate one another, and are undermined by vandalism-like scratchings on the photographs – questioning their veracity or the authenticity of the point of view, as the artists continue to adjust their positions through the space, languishing, staring at the ceiling, at times almost sleeping.

The show ends with the first and final direct engagement between the two artists – who sit opposing each other against an eerie chorus of harmonies – as though simply to highlight their previous estrangement. It completes a strange feeling of “thinking with” that pervades “Take me somewhere nice” – not so much an escape in the end, as a return to togetherness through separation, a return to time through its suspension. It rounds out a complex treatment of the concept of travel as a dialectical puzzle full of contradictions: ‘a return to the self through the other’, or a search for home that occurs precisely through the action of leaving it. The desire for travel is here proposed as a need to find oneself, although it comes with more questions than answers.

As the performance continues over the remaining 5 planned “almanacs”, is it probable that this trend will continue. Is travel not, after all, itself an accumulation of unanswerable questions?

“Take me somewhere nice” by Christina Ciupke and Darko Dragičević was shown In the frame of Fold – New Works by Tanzfabrik Berlin at Uferstudio 5 from 13-16 October 2022.